The Red Threads of Fortune and The Black Tides of Heaven by JY Yang are a matched pair of stories, and I figured that whichever I read first would change the way I read whichever I read second. So I did what any good D&D player would do and rolled a die. Even red, odd black: 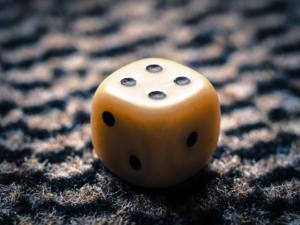 Guess I start with Red Threads!

Mokoya is a seer: her visions of the future and past intrude on her present, and to mirror the protagonist, the narrative is out of joint. We begin with her destroying a communicator, severing a tie to her hunting group, leaving her alone in the wilderness with a dangerous naga. But that’s fine by her, she has faith in her skill with the Slack, a system that isn’t really magic but is a bit more structured than “energy” or “force.” So much so, in fact, that she uses it to solve every problem in her life, from grief to prophecy. 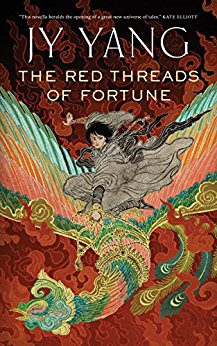 Yes, here prophecy is most definitely a problem, since the future is solidly immutable, or at least the portions Mokoya foresees. She suffers from her knowledge of these events, her knowledge that she cannot stop them, and her ignorance about the larger pattern into which they and she fit. She asks larger questions about what is fixed and what is mutable in this life while solidly refusing to accept what is in the present. After all, Mokoya failed to predict the one thing that irrevocably changed her whole existence; it’s also the one thing that, ironically, leaves her unable to move on no matter how far away she goes, physically. Mentally, though, she ranges across time, never settling until the immediacy of the naga hunt and her brother’s rebellion are too huge to ignore.

Her brother Akeha, we then learn from Black Tides of Heaven, struggles with passivity, and even from a young age he mostly reacts rather than acting, leaving that to Mokoya. The only thing he really wants to be different from his twin. Mokoya is different from him, which seems like splitting hairs, but it’s important: Mokoya’s prophetic abilities are a concrete ability that she possesses. Akeha has only the absence of such ability. He wants–needs–something to positively distinguish himself, and after choosing his gender (different from Mokoya), he sneaks off into the world to keep choosing in the hopes that he’ll hit upon something big enough.

What he finds–and his choices seem small things, but I suppose they are choices–is a rebellion against his mother. He takes up the Machinist cause against the Protectorate over which his mother reigns, and makes himself an exile. While Mokoya embraces traditional training in the Slack, he goes toward the boundaries, fusing it with chemistry and engineering to make new inventions–and weapons.

What separates those who use guns versus those who use magic and their fists is time, or, more specifically, training. Technology does not require that same training–only its creators must have extensive skills, not its users. And unlike Slackcraft, technology outlives its creators. Yang does not come to any conclusions about the Slack or its mis/use in machines, and I find that I like that. Both are expressions of human ability, and the morality rests only with the humans who choose to apply those abilities for good or ill.

It’s very much in line with the treatment of gender in the book, which is wholly a matter of choice. Biological expression is held at bay with the Slack until each person chooses how the would like to be, and different levels of choice are also presented. Some never express; some do only socially, in language and clothing and such; some choose late, some very early. Genderless pronouns are used easily and comfortably, and gender is not presumed to have any bearing on sexuality, or vice versa. This world is complicated in its politics and clashes of culture, but in this at least, it’s beautifully simple. How lovely to see a piece of sci-fi that hearkens back to the optimism of some of the classic writers, but on such a different topic.

Several pages into The Black Tides I realized I should have started with it and not Red Threads. I suppose it depends on whether you like to start things from the beginning or in media res, which is actually a clever little dichotomy. However, I also think Black Tides gives more measured into both twins’ lives, rather than seeing everything from the more biased perspective of adult Mokoya. It would also have given a better sense of progress to the events that reverberate through the empire and thus through the twins lives. It also lays a foundation for the basics of Slackcraft and the technological rebellion that Red Threads doesn’t get into.

I love the expressions of gender, I love the magic system, I love the technology system, and I love the ideas. I love the setting, I love seeing a Malay accent in my sci-fi, I love that both characters are so driven and so complicated. So why don’t I like these books more? I think I like the idea of the characters more than the characters themselves. They seem overworked, like dough. The narrative and language are on the heavy side, almost perfunctory–they lack joy. Perhaps that’s it. All the excitement of these new and amazing elements coming together has been squashed by some fairly ruthless editing. There’s some texture, some depth missing; it needs the details and asides and emotional elaborations that a longer story would have. 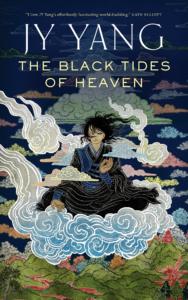 Both protagonists are also drawn in and shaped far more by their lovers than their own wills. Their chemistry is compelling, but again, the details are missing (either of internal landscapes or external moments of compatibility), and so devotion unto death seems a tad unwarranted in both siblings’ cases. Likewise some of the Empress’s machinations seem thin. They are substantiated only by a few lines, remarks about terror or violence but again, we don’t see enough, and so her rule seems distant.

And finally, we don’t get resolution or even much progress on the Protectorate vs. Machinist battle that only seems to consume the characters, but doesn’t actually occupy much of the action. Accidents and quirks of fate affect them far more, and while that may be a good philosophical stance, it doesn’t make for a terribly satisfying duology.

Yang set themselves a doubly difficult task with two novels that need equal amounts of suspense and surprise but with the same story. Reading Red Threads destroys much of the suspense of Black Tides most emotional scenes (we know who will or will not die, we know their fates); much of the mystery of Mokoya’s emotional progress would be spoiled in Red Threads if Black Tides were read first. The problem is mostly in the fact that the chronology isn’t the same. It was a good idea but the execution here is flawed. For the first book we know too little; the other, too much.

As with Five Daughters of the Moon, I wonder why these were handled like novellas rather than novels, or even one novel (I’m thinking a less PoMo version of Only Revolutions). I know the novella program from Tor.com has been enormously successful, and perhaps we are now seeing the limits of what the format can offer versus the more traditional short story and novel lengths.

Also like Five Daughters, the covers are stunning. Tor.com is pushing some serious boundaries with its art as well as its stories, and I am here for it. Same for Yang’s short story here.

I in no way want to detract from what Yang has accomplished by so skillfully creating this world around these characters. It’s so many of the things I’ve been hungry for, and that the genre badly needs. This is a bold attempt that succeeds on many fronts, but ultimately needs more time and attention. I look forward to better things from them, in this universe and others, as they move forward.

The Red Threads of Fortune and The Black Tides of Heaven will be published simultaneously on September 26th.