The minute I saw the name for this book, I exclaimed—ostensibly to my husband, but my cat or the open air would have sufficed—”of course this needs to be a book. Why has no one thought of this before? The Refrigerator Monologues—it’s so obvious.”

But like many of the most interesting things, it’s only very obvious when someone points it out. And this time it took the brilliant Catherynne M. Valente to draw that short, razor line between that other organ of female fantasy and abuse, the imagination. 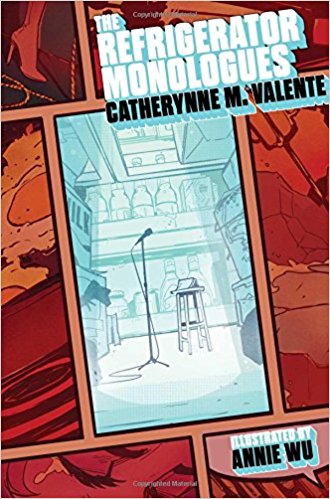 The point is, this book had intrigued long before I got my little paws on it, and it had me hooked by the dedication. That’s not easy, by the way, but when you dedicate your book to Gail Simone, well, that’s gumption. That’s Babe Ruth calling a homer. It’s nice, too, of course. We all owe debts to Gail Simone, whether we acknowledge them or not. We all—yes, all, gentlemen—owe debts to feminism, to The Vagina Monologues, and to the superheroes who shaped and mis-shaped us.

First up is Paige Embry, who’s a nerd. She’s a geek girl! She loves science, she loves her part in the industry. And like a real scientist, her contribution is part of a collaborative effort. She wants to help. Progress for her is a 2.21% increase in efficiency toward a liquid metal exoskeleton that will protect soldiers in combat–and accidentally, will also turn anyone into a living metal speedster. Her boyfriend gets dosed, and then a wicked and jealous professor, and Paige’s contribution is to die. To provide the origin story and the motivation, and then to fade into death. And like a real geek girl, she’s easily forgotten by her industry and the men she loves.Our society forgets female audiences, female scientists, female contributions. We know Watson and Crick but not Rosalind Franklin. And we know The Flash and Spider-man, but do we know Iris West and Gwen Stacy? (Many more of us do now, but the point still stands.)

Why focus on such powerless women, though? They aren’t superheroes, right? I mean, it’s all very well to demand equality, but they don’t have powers. We don’t have to tell stories about every citizen of Metropolis and Gotham when it’s Superman and Batman who matter, right?

But the thing is, we’ll never know if Paige or Iris or Gwen could have saved the world, 2.21% at a time. And we can’t know whether, in the Grand Guignol that is Valente’s Gotham, Pauline Ketch would have had the power to become one of the Good Guys. Not all superheroes have powers. Some of them just have issues.

Pretty Polly’s monologue is the X-rated version of Harley Quinn you always kind of suspected was there, once you grew up and realized it wasn’t all mallets and charming mischief. It’s not like the best versions of her didn’t hint–or more than hint–at this, but Valente lays it all out in pornographic technicolor. Polly–Pauline–gets even more of a backstory, going from emotionally distant father to emotionally distant (and disturbed) boyfriend. We get cause and effect, but it’s no less sad to see her get used. Because exposition isn’t the same as intervention.

But why can’t we tell gritty stories that reflect life? Surely we don’t want perfect women with perfect lives!

Yeah, except Pretty Polly doesn’t even get a life. She gets one piece of information to pass on, and then she gets dead. Her motivations, her tragedy, her story–all of it ends because she’s a means to an end. She’s the friggin’ beard here: the homoetroticism of Batman and the Joker’s unending battles comes to the fore in this story. (I mean, there’s really not much more to be said once you point it out. It’s another moment of, “oh, of course.”) Sure, she gets to be tragic in some ways, but to hear her tell it, tragedy’s not really her thing. She wants fire and laughter, not the seriousness of the Batman universe. 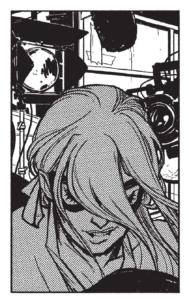 Look, Batman always has and probably always will be my favorite superhero. I like his seriousness. So it’s not exactly fun to see your favorite hero dragged or subjected to the Thousand Eye-Rolls Exploding Masculinity Technique. I mean, she calls him Grimdark. As in, that’s his superhero name. I love it, but it hits close to home. I love it because it hits close to home. If these stories are going to stay relevant and powerful, they have to contend with their flaws.

And before I get ten million angry mentions, I know there have been authors and artists trying to change this. I know we get those options. But as Julia’s story about canon suggests, women don’t always get to keep their heroes or their happy endings. Julia, a pseudo-Jean Grey, gets written out of her own history and has to keep switching between seven different timelines, in all of which she’s almost an entirely different person. Trying to find that kernel of personality or archetype in some characters’ histories gets harder and harder, and that character means less and less as you’re forced to contend with versions that are the antithesis of the one that came before.

Valente is smart to point this—and about a ten thousand other things—out. The writing is electric, every little detail an aside to the reader. It’s like the distillation of an entire sitcom, one quip after another, the rapid-fire no-laugh-track kind you have to watch repeatedly to really get all the jokes. There are lots of references, and I’m sure I didn’t get them all, but what I got was great. My favorite one-off is a mention of “the Unstoppable Id,” which, like a lot of these things, is funny because it’s true and sad and creepy and uncomfortable because it’s true, too. I have never liked the thinly-veiled metaphor for abuse and aggression that is the Hulk, and–don’t @ me—what more is there to say about him, when it comes down to criticism’s brass tacks? The Hulk is a man’s fantasy and a woman’s nightmare. That story is common in superhero relationships. We see it with Polly (/Harley) and we see it in Bayou’s (/Queen Mera’s) history and we see it and we see it and we see it. Valente doesn’t need to do more than call him the Unstoppable Id because he’s only the most obvious manifestation. Anger is appealing. Other emotions, not so much. 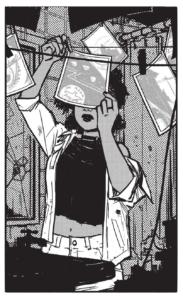 Bayou’s story hurt worst for me, because we all know nobody wants to write about the non-punching joys of motherhood or the truly immortal villain, grief. Well, grief is okay as long as you’re Grimdark (/Batman), punching lots of dudes about it. Otherwise you don’t get to own your tragedy. Grief is inconvenient. And mothers don’t get to be powerful—they get subsumed under that ultimate mask and title and archetype: Mom. Bayou points out that she’s just as powerful as Avast (/Aquaman), but membership in the various boys’ clubs of Hero Leagues has a different standard for women. They have to be powerful and. And non-threatening–so Bayou, as queen of Atlantis, and Julia, as more capable than the rest of her team combined, aren’t good candidates. And sexy–but not as sexy as Daisy, who becomes a porn star of her own free will, and makes The Insomniac too uncomfortable to stay in touch. And moral–but not as honest and insightful as Samantha, who points out her boyfriend’s questionable ethics and compromises, and ends up dead in a fridge.

Yes, Valente tackles the fridge head on. What it would feel like to die in one, staring at expired leftovers. The absolute degradation and disrespect of it. What it feels like to die knowing that you have shock value rather than value as a human being. Samantha (/Alexandra deWitt), like the rest of these women, know as they live and as they die that their stories are going to be co-opted by the men they date, the men they love. Because unlike what those other archetypal heroines, the Disney Princesses, taught us, love doesn’t save you. However much we want or need to be saved, superheroes aren’t gods. We can’t blaspheme against them; they need the criticism. And we have to save them.

This book is a nice big step in the right direction. Thanks, Ms. Valente. (And thanks, Ms. Wu, for the illustrations.) You knocked this one out of the park.