I was astonished when I picked up The Song Rising by Samantha Shannon, the third installment in the Bone Season septet. It’s only 350 pages, shorter than both previous volumes by more than a hundred pages. Most series this long (I believe this one is planned for seven volumes, a la GRRM) succumb to bloat at this point, losing either focus or the time for editing as creativity is subjected to a release schedule. I was pleased to see from the acknowledgements that Shannon was given leeway to take her time (not a GRRM amount of time, but more than a year), which is probably why this is a lean, mean fascist-fighting machine.

I do find the central theme one of the most interesting ones in fantasy these days, especially given the political climate recently. Shannon spends the time exploring the nature of compromise as Paige and the thieves-turned-rebels of the underworld begin their massively mismatched fight against a fascist regime. From the first pages Paige is forced to fight her supposed allies—voyants (“unnaturals” who can connect to spirits and the Aether) who want to turn a blind eye to the noose tightening around their necks, and go on as they have for decades in a fraught detente, not realizing that the game has changed. These people aren’t willing to sacrifice the cozy security of their (incorrect) convictions, let alone the perks of their black market lives, which means that Paige is already fighting on two fronts when she tries to engage with Scion. 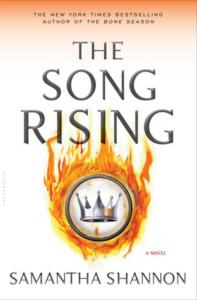 The political maneuvering of Scion, fascists with ever-expanding spying technology, is really quite excellent. They create fear and then sell their citizens safety at the cost of personal and public freedoms (sound familiar?), and the prices just went up again in The Song Rising, as martial law is declared and troops are deployed across the heart of the empire. In this world, those with supernatural powers are the scapegoats, and Scion has found a way to infallibly detect them via scanners. It’s a huge blow to the voyant community, and it falls to Paige and her team to stop it.

Then there are the other potential allies: those who have their own agendas that may run contrary to Paige’s ideals, but who have too many resources to ignore. The lords and ladies of other cities don’t much like London muscling in on their territory; the Rephaim don’t trust or understand humans and won’t give them much to work with; the voyants who work for Scion might be willing to turn traitor, but mutual hatred runs deep; the vile augurs are willing to help in return for respect but other voyants are prejudiced against them. Few fantasy novels make the complexities of revolution clearer than this. Building consensus and making compromises is difficult and sometimes morally gray, and Paige is an inexperienced politician at best. And when she fumbles (as is only realistic), things go from bad to worse.

Paige falls back on her powers to provide a solution, and it’s tempting to want her to succeed as an overpowered individual to give the rebellion the successes it so desperately needs. But Shannon wisely recognizes two things: one, that individuals are fallible, and two, that Might is not a good thing to throw around even when one is (probably) Right. Paige cannot—either realistically or morally—do this on her own. She has to persuade and not force, and she has to decide what help she’s going to accept and where she’ll draw the line.

She does try to do things her way first, though, which I found to be thematically important but lacking in the execution. Pagie assembles a small team of her allies to make a daring assault on a facility that she is told contains the new scanner technology. Maybe this is quibbling. Maybe Paige’s actions are entirely reasonable given that she’s a flawed human being and not used to leading. But seriously, if your only intel comes from an agent whose entire operation was handled by a traitor, can’t you at least entertain the possibility that either the agent or the intel is compromised? No matter how much Shannon insisted that there was a good reason to trust this agent, it was impossible not to see something going wrong. 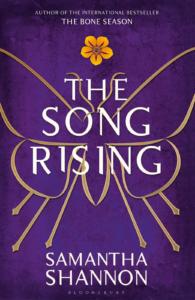 Want to know how I know this? It’s not from studying military tactics. It’s from sample sales. If someone is pressuring you to buy something right away, either there’s something wrong with it or with the seller. You cannot make sound military decisions or shoe purchases on impulse.

The book deeply frustrated me with this and with the romantic subplot. What I liked about the romance between Warden and Paige was that it was actually forbidden. It was between individuals of very, very different motivations, expectations, and goals—and they aren’t even the same species. Overcoming these very real obstacles made their relationship compelling. Now, though, Paige is acting like this means nothing. She is literally tethered to this man with a golden cord, a symbol of the way that they have saved each other despite significant opposition and danger, and yet she’s wringing her hands and giving him the silent treatment because of something her old boss said. What’s with the melodrama, Shannon? Why can’t they talk to one another like the adults they are? Sure, vulnerability is hard, especially when you’re the new head of a rebellion that doesn’t entirely trust you, but it’s obnoxious that Paige trusts dubious intelligence and then turns around and could shoulders her lover.

They do eventually come to a conclusion, one that fools absolutely no one who has ever read a book, but okay, it makes logical sense within the character’s perceptions. Paige is 19 and relatively inexperienced, so let’s say it’s a wash.

Fortunately, The Song Rising rose from these early mishaps to have a truly magnificent second and third act. Paige faces off against Hildred Vance, a truly despicable foe and the commander of Scion’s military. From Paige’s vantage, her own acts are always a balance between desperation and sheer foolhardiness; Vance, on the other hand, is playing an elaborate game of wits with the might of propaganda, industry, and troops at her disposal. Exhausted and on the go, Paige nevertheless begins to grasp the state of the board. She even begins to change it.

By the end, I absolutely could not put the book down. I know that’s a common phrase, but I actually walked to work (over ice and through the twisting corridors of my building) with my nose buried in it. Its final confrontations and emotional weight were the heavy tolling of a bell whose note hasn’t stopped resounding, and I was pleased, finally, to find that not only The Song Rising but the next book—whenever it arrives—are both worth waiting for. 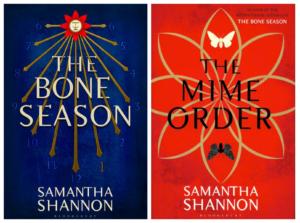 The previous two volumes of the series