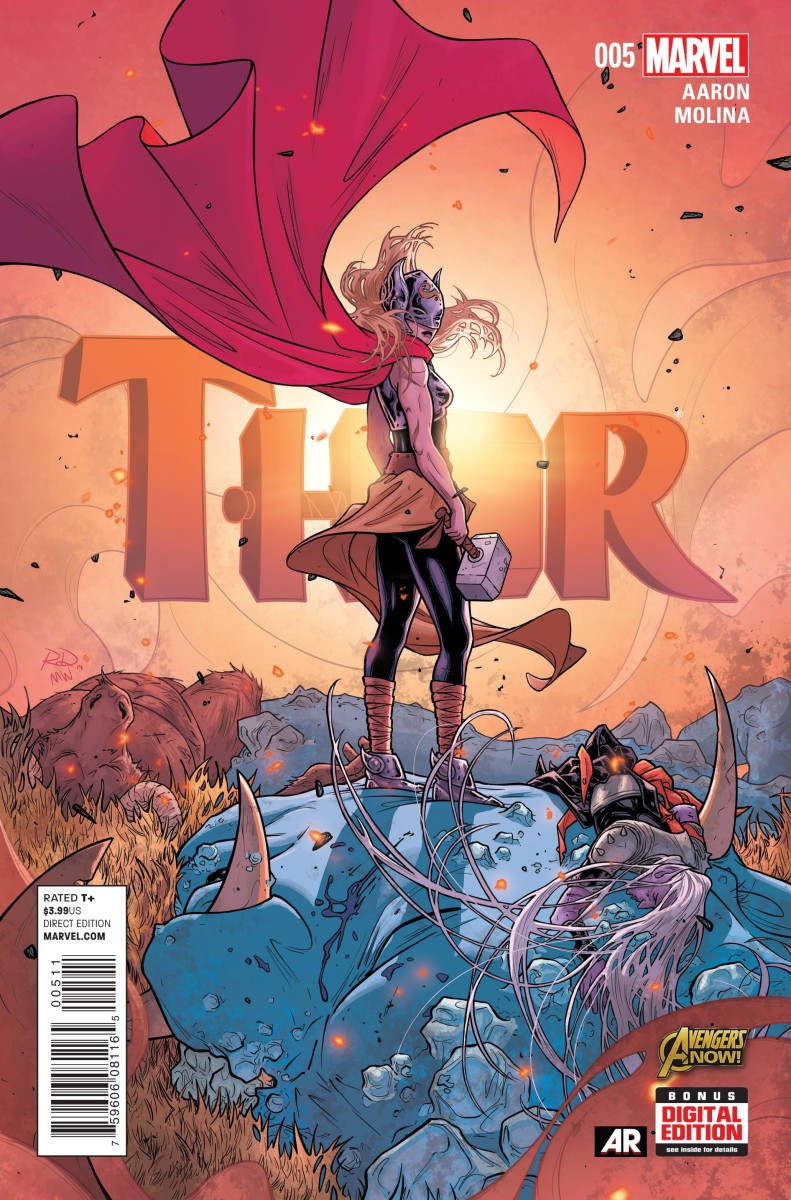 The Goddess of Thunder has truly arrived. If you have not been keeping up with this recent change up at the house of ideas, you need to fix that ASAP. While this particular issue is a bit of a dip, it is still one of the better books coming out of Marvel today. Jason Aaron and regular artist Russell Dauterman are cooking up something special here. You’ll want to be on the ground floor of this, trust me.

As mentioned above, this issue is a bit of a dip, but understandably so. We just wrapped the introductory arc for our new Thor, and that was a blast. For those not keeping score at home, the old Thor has become unworthy to wield his godly hammer Mjolnir. After Nick Fury whispered something in his ear (during the previous big Marvel event Original Sin) the hammer dropped. What was whispered is still a mystery as old Thor (now referred to as Odinson) keeps dodging the question. Another mystery is who exactly this new Thor is. As of this issue, we can officially cross Freyja, Thor’s mother, off the list. Sif is still somewhat under suspicion, though I doubt it’s her based on the new Thor’s inner dialogue.

This issue deals with the fallout of having a new person wielding the hammer both on Earth and in Asgard. Odin is incredibly upset, Odinson is bummed but also proud that someone awesome is wielding mjolnir better than he did, and Thor herself is having her first non-Asgard related fight with Absorbing Man and Titania. Odin is scheming with Cul Borson, the God of Fear, to get the hammer back, which leads us into the next arc. Odinson is tooling around Asgard with a literal list of names on a scroll who he thinks might be the new Thor. I’m so happy to see Odinson being used more for comic relief as I think he is hysterical when written right.

The best part about this new Thor series is how well Aaron mixes action and mystery. We still don’t know who is wielding the hammer, and I think that’s great! There is also so much behind the scenes scheming, both with our typical villains but also with the heroes, that should lead to some fantastic conflict.

The art in the issue is quite good. While Dauterman is the regular artist for this book, Molina can guest art anytime he wants. While making the issue wholly his own, Molina still injects every scene with that great fun mixture I was raving about before. The way Odin throws his arms while he rants, the way Thor drools when he gets black-out drunk, down to how our new Thor smirks when she is told some series threats are coming her way. This issue just feels like epic fun.

If you start with this issue, you’ll still find it very entertaining, but you might not sing the books praises like I am now. I would recommend going back and reading the first four issues so that you are caught up. I highly recommend this book, and this issue, to fans of epic fantasy action and mystery.