I never knew I wanted, no needed, to control a gargantuan scorpion in combat until I played Kemet by Matagot games. I promise I will get back to the scorpion thing in a little bit but first let me tell you about the overall game of Kemet.

Kemet is a war game set in Egypt where the armies of various gods battle for glory. Players take control of these armies, and set out to gain eight victory points. Controlling certain areas of the map or purchasable powers can grant victory points but the best way to acquire these points is by attacking your enemies.

Combat can be perceived as simple at first glance. The winner is simply determined by the highest number of units. Players play combat cards that can add units, destroy enemy units after the battle, or block the destruction of their own units. These place a higher emphasis on strategy rather than luck, even though luck is still present. Players will struggle to try to read their opponent and figure out which cards they will play. 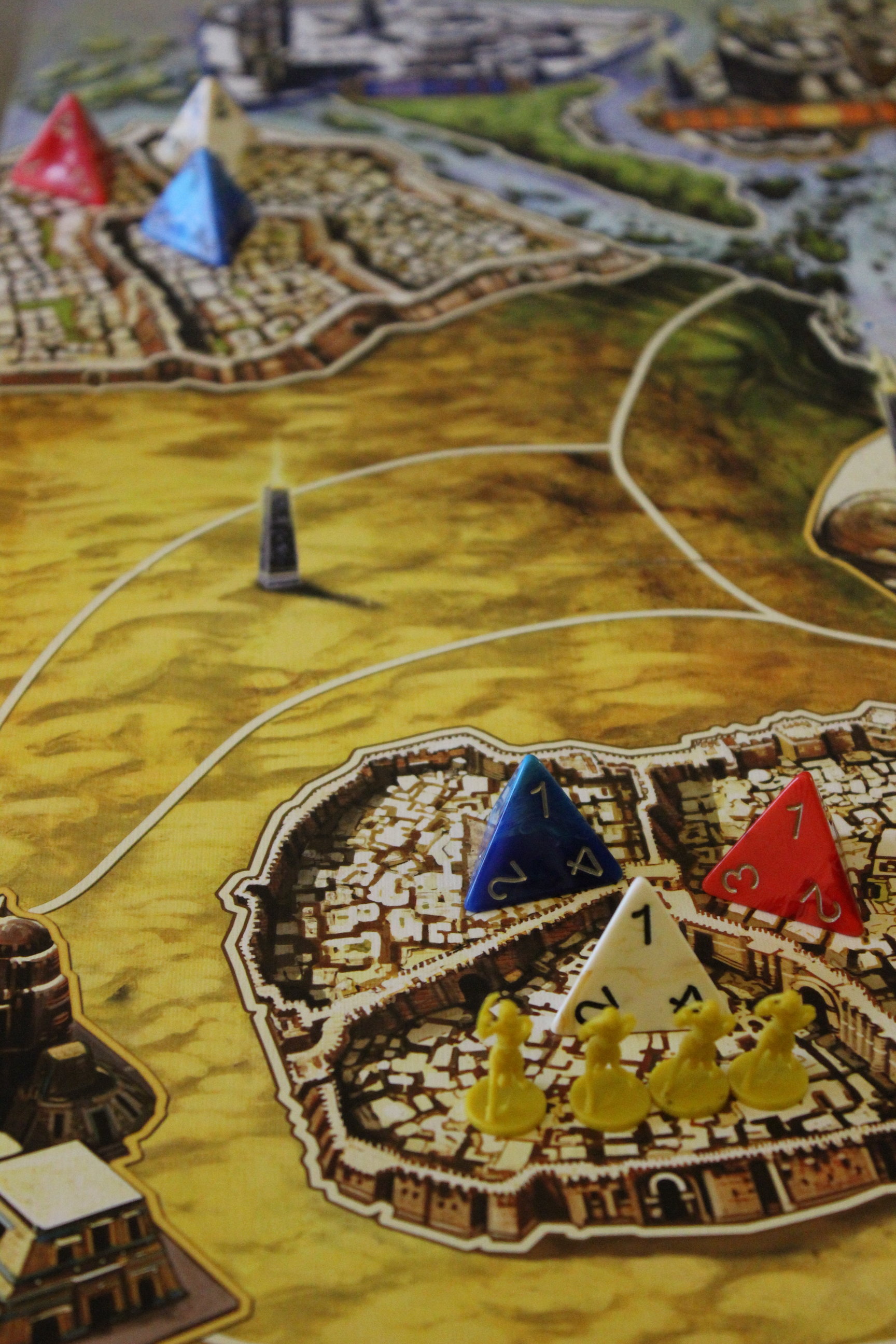 As I have described it, Kemet sounds like a cut and dry war game. A big part of how Kemet differentiates itself is in the 48 available power tiles. These power tiles grant special abilities in attacking, defending, and give players prayer points, the in-game currency. 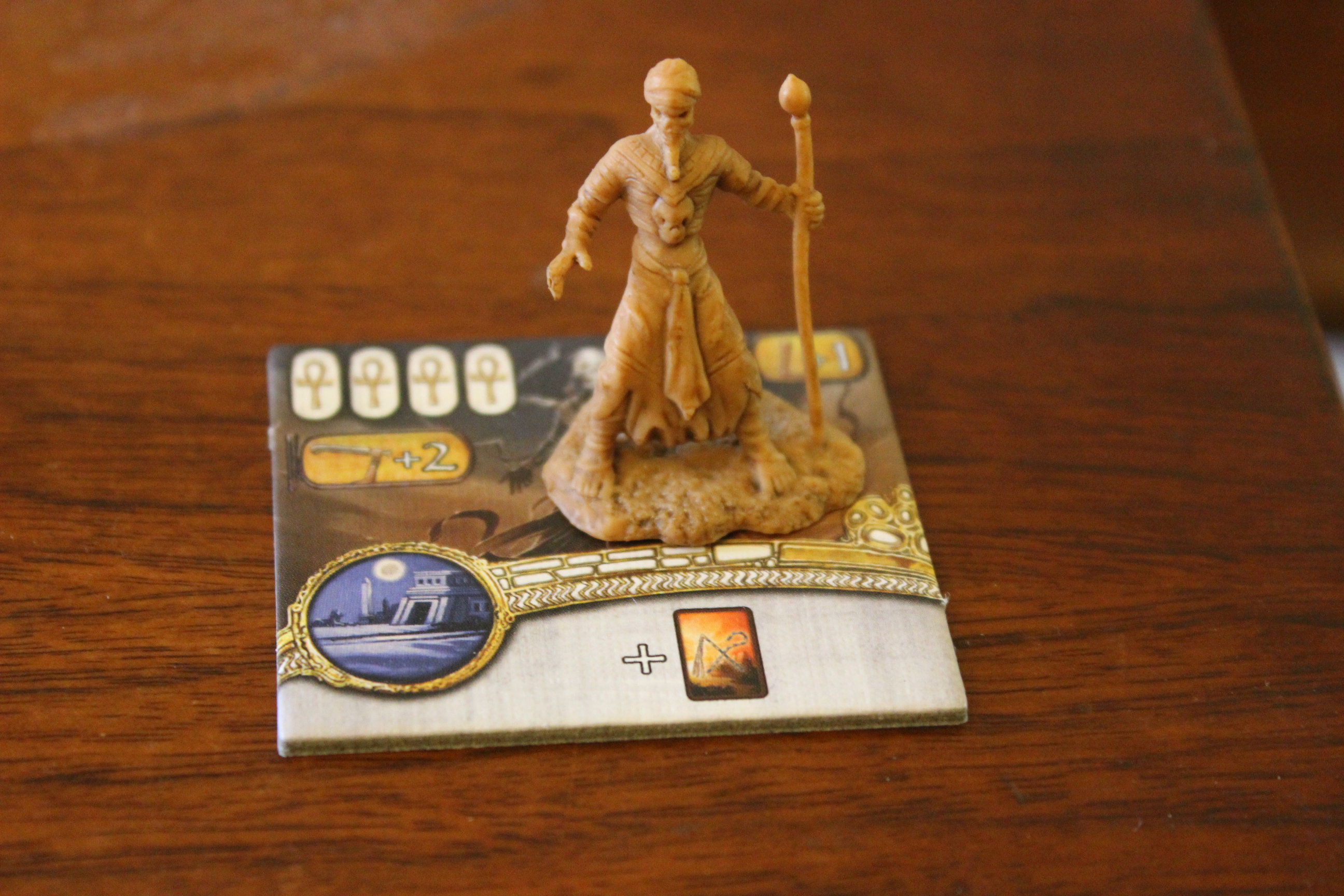 Are you my mummy?

Each power tree is beneficial. The red powers allows players to decimate their opponents and better capture battle victory points. Prayer powers, represented by the white color, add extra prayer points that let players constantly spew out troops or buy more powers. Perhaps you would like to hold a temple and gain those victory points- blue powers can help you beef up your army’s defense and keep those temples in your clutches.

Some war games include other mechanics such as an economy or a political mechanic to add diversity to the game. These mechanics sometimes feel bolted on, and often dilute the overall fun of the game. There is a time and place to worry about political influences or insuring trade routes are protected. If you are looking for that sort of game, Kemet is not what you’re looking for.

I told you I would get back to the scorpion. Each power tree has at least one special unit that can be added to your existing army. Snakes, elephants, scarabs, mummies, and sphinx are all up for grabs. Pure bliss is experienced when you add these to the map, the faces of your opponents sink, and their eyes dart to the available powers to see how soon they can acquire a similar one of their own. 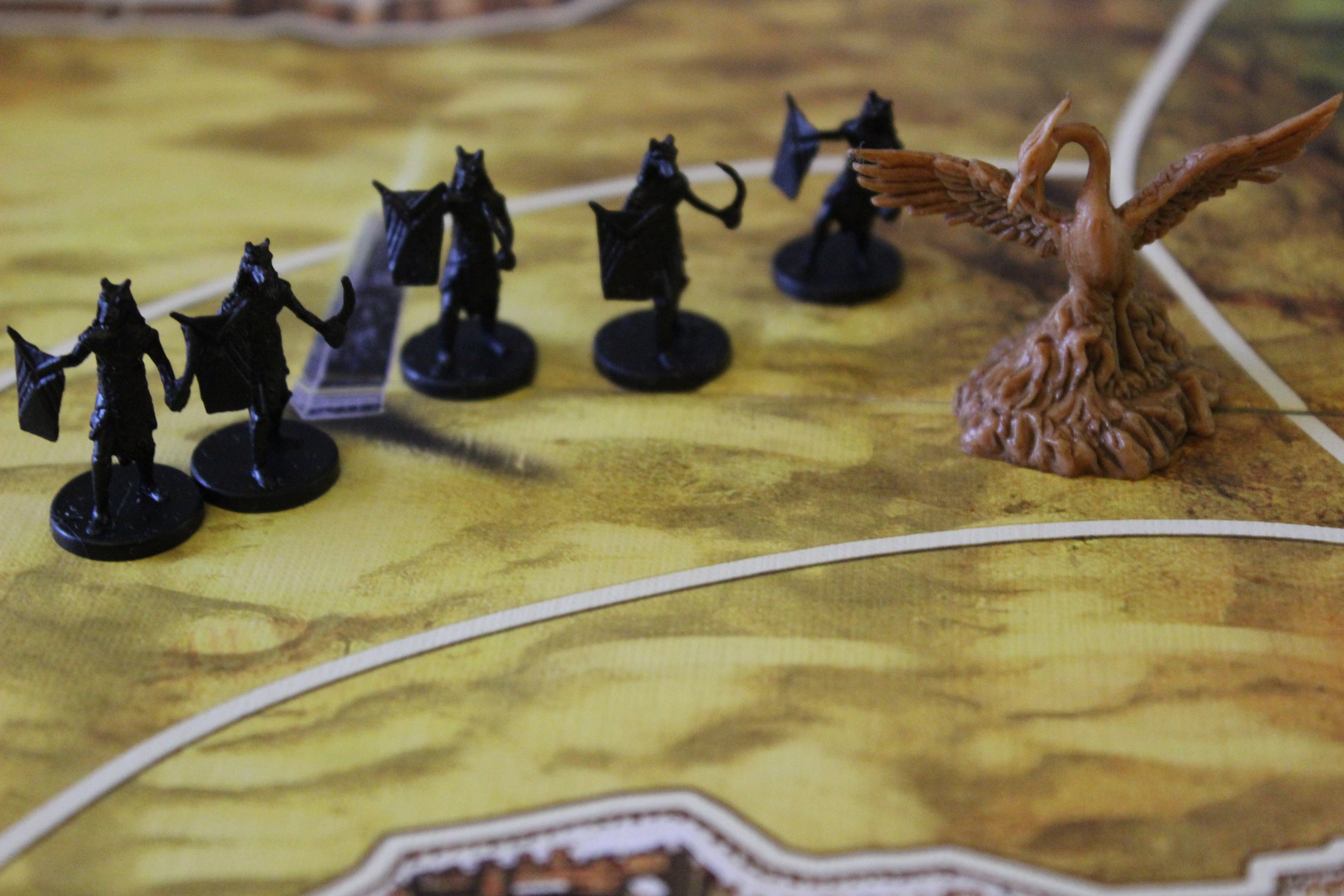 War games often suffer from a problem wherein players fight players adjacent to themselves. It is often near the end of the game before some players even begin to interact with their counterparts on the other side of the map. Even though the map is large you can leap to just about anywhere in a single action. Obelisks are located on the map and players may use these to transport their units for little cost. This dials up the pace of the game by making every player a factor for everyone else in the game.

Condensed. Clocking in at about 45 minutes per game, Kemet provides all the substance and fun of battling, but removes the excess parts most war games tack on. Kemet is a war game at its finest. When the day calls for a war game, but not one that takes all day, turn your eyes to Kemet and that illustrious scorpion.