You know the adage “don’t judge a book by it’s cover”? Of course you do. No matter how much you might want to take issue with that, just don’t judge this book by this cover. I’m not sure what happened, but the text and the image don’t match at all. The jaunty, over-bright colors, the dramatic font choice, the action-movie quality of the person on the glider…it’s all far too obvious and blockbuster for this far subtler book. For instance, do you see those dark columns in the background? You have to look rather closely and have read some of the book already to notice that they’re actually vertebral columns. Yes, the citizens of this sky city inhabit towers of living bone. It’s incredibly cool, but the cover doesn’t foreground that. Not sure what happened, but let this serve as a warning: don’t be like me. Don’t hesitate to read this just because it feel a little too pop. Because it’s excellent.

What I love about the writing is the cadence of speech. This has a very traditional feel to it, unembellished and straightforward, like a good myth or saga. The matter-of-fact quality to Kirit’s voice is extremely compelling, making the mere fact of reading a pleasure. And then there’s the story itself, which is gorgeously inventive, a whole world of scarcity and invention. The towers of bone reach above the clouds, but at the expense of the ground, from which they are now permanently cut off. Inhabitants are stranded with only the resources they have or can gather from birds and the invisible, deadly Skymouths. This makes for some fascinating innovation and worldbuilding. 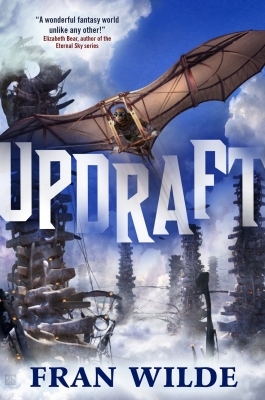 In this world, punishments are weights, things that would pull you down to a lower tier or cast you down past the clouds entirely. Hierarchies are exactly that, rankings based on proximity to the top of the towers in which you live. Since the community lives under constant threat, justice is swift and often communal, reenforcing any norms that preserve the delicate peace. Punishment is also generational, letting children bear the burdens of their parents’ infractions. The whole system is an insightful exploration of a community on the edge, harsh and full of tension, but also lovely and full of deep camaraderie.

All the characters, no matter what their moral alignment, really do want the best for their community. And all the characters struggle to weigh their personal choices against their many layers of loyalties. It’s not nearly so bloodthirsty as Game of Thrones, and rightly so: in a place where your “driving” test runs a real risk of killing several people, no one can afford to take life lightly. This is a welcome change to stories of serial killers and wanton murderers: each life has a great deal of weight.

Kirit is a young woman on the cusp of adulthood by her city’s standards, poised to take her wingtest, a rite of passage not unlike a driving test, if our roads were beset by invisible giant tentacle monsters who want to eat us. (Be grateful the worst thing you had to do was parallel park, okay?) Kirit will have to demonstrate that she can fly safely and that she knows the community’s many, many laws in order to earn the right to fly on her own as an apprentice trader.

But before she can even take the test, she breaks a law and nearly gets herself killed. And it turns out that nearly dying is the least of her worries. There are plots upon plots and secrets upon secrets at every level of every tower, which threaten not only her but her friends and family, and ultimately the entire city.

The only real flaw with this book is something that can’t entirely be helped. The society in which Kirit lives lacks a truly scientific understanding of their world, so they themselves can’t explain why they are able to live above the clouds, how they are able to keep extending their cities upward, and from what their towers of bone are growing (an animal? Something else?). Still, it nagged at me that there were humans or humanoids with seemingly unlimited atmosphere. Chalk my irritation up to Wilde’s excellent ability to explain most other things, making this feel like an oversight rather than a choice.

I am extremely eager for a sequel set in this world already, perhaps a prequel, perhaps a continuation of the legend of Kirit, or something else entirely. Start your own countdown to Wilde’s next book on September 1.