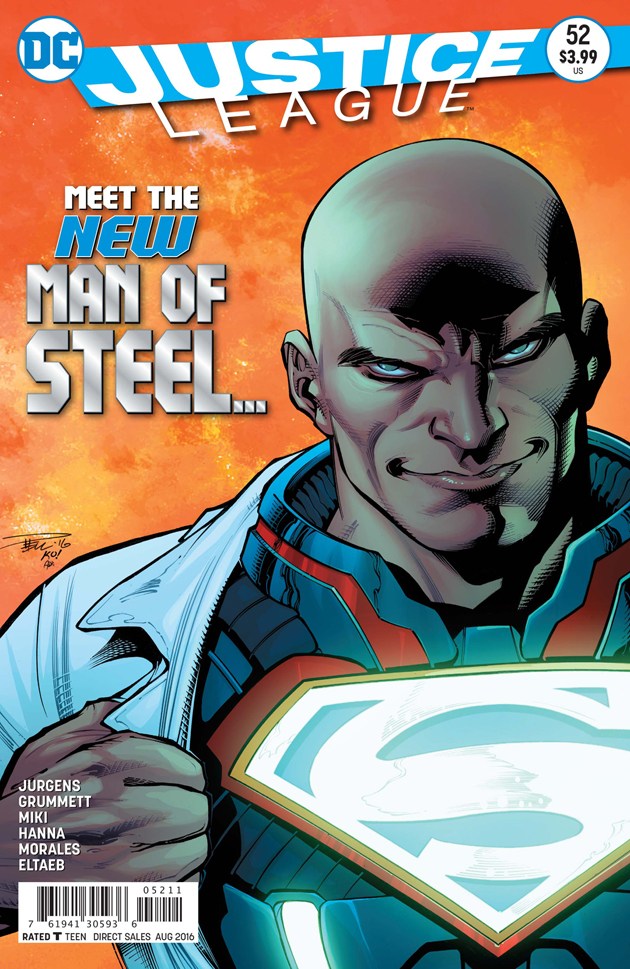 The last issue of New-52 Justice League and it doesn’t even have anything to do with the Justice League. Or at least, that’s what I’m expecting. And it’s written by Dan Jurgens, who I don’t like. Alas, first impressions are not good. Here’s hoping I’m wrong.

Sitting next to my desk is a cup of lukewarm English breakfast tea. It still has flavor, but I’m not really getting anything out of drinking it. This is how I feel about Justice League #52. Were I a Superman fan, I would no doubt have strong feelings about this issue. Lex Luthor assuming the mantle of Superman will no doubt be a divisive move for the series. I of course can appreciate the idea of trying to be a better man, and to be fair, Dan Jurgens does this well. The issue is in no way painful or laborious to read. It is however, nothing to do with the Justice League. And so, unfortunately, I can’t really offer any concrete thoughts on it. So, in the end, a mildly enjoyable issue with perfectly serviceable art. Maybe. Don’t quote me on that. 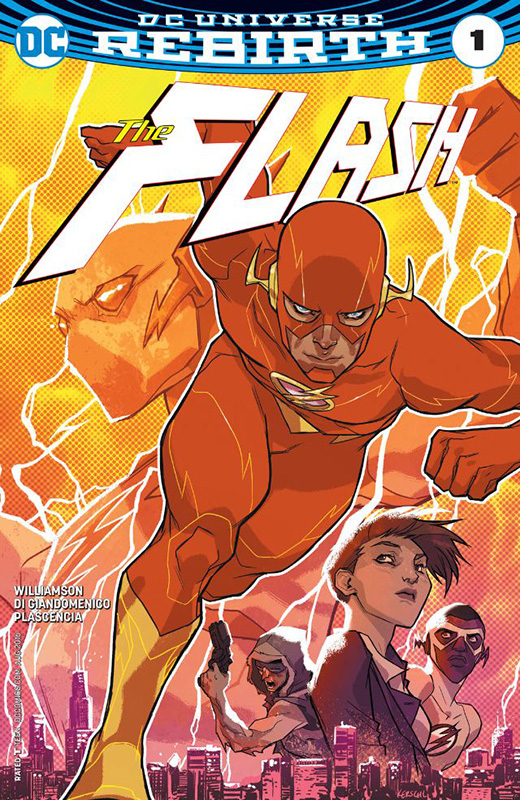 No doubt you can guess what I’ll say here. I’ve already talked about the team for this new run on The Flash, so I won’t do again. That said, I thoroughly enjoyed The Flash: Rebirth #1, finding it to be a great introduction to the character. The team is solid, so there’s no reason why this won’t be a great kick-off point. As an aside, I’m really digging the pulpy, newsprint vibe coming from this month’s cover, very cool.

Good, but sadly not up to the high levels of other Rebirth titles. Similar to Flash: Rebirth #1, we again get a sort of overview of Barry Allen’s character and his life. Who he hangs out with, what he does when he’s not The Flash — that sort of thing. It’s the issue’s strength, easily, and for someone who knows (comparatively) little about The Flash, it’s a good first issue. That, combined with Barry’s ever present narration to himself, means that the issue gives a great sense of who Barry is, building on Rebirth. Carmine Di Giandomenico’s art has a fantastic, rough, pulpy feel that I’m really digging. It actually somehow manages to feel quick, which for The Flash, I’m thinking is a good thing. And yet, it all kind of falls short.

It took me a while to put my finger on what was bothering me so much about it, but oddly enough, it’s the pace of the story. While I understand it’s the first issue and some time needs to be taken, a story about the literal fastest man alive should have a reasonable amount of speed behind it. There’s just a little too much time spent standing and talking, when it could be spent running. And unfortunately, while the inner narration is great, conversations are not up to that same standard. They don’t feel particularly natural and there’s a little too much exposition forced into too small spaces. That said, the ending of the issue is dynamite and raises some real eyebrows. So, with a bit of screw tightening, I see no reason why The Flash couldn’t be one the best around. 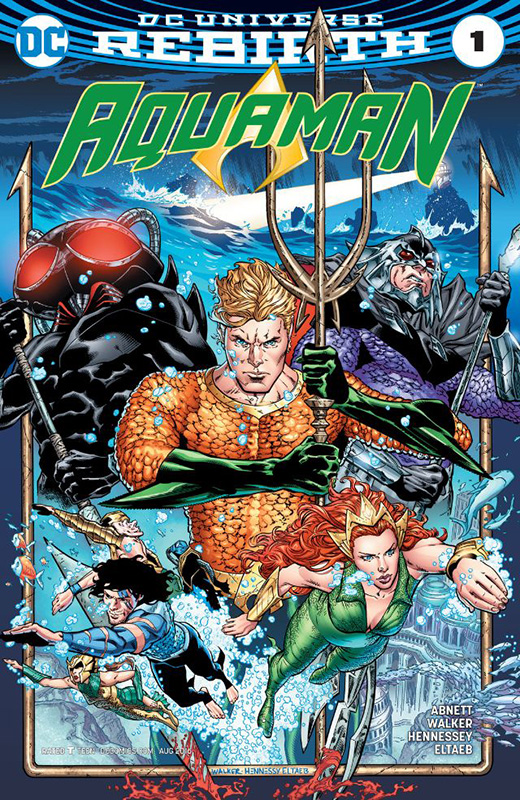 Aquaman: Rebirth #1 was perhaps my favourite of all the Rebirth one-shots I picked up. It had a clear, interesting overview of the world of Aquaman and it did a great job of telling me who he was. On top of that, it managed to set a real, emotional connection between Aquaman and his wife Mera. That last bit is important as it also piled on a bit of heavy foreshadowing that Mera would be in danger in future issues. With a seriously kick-ass cover and a solid issue behind it, I’m very excited for this first chapter.

Fantastic. A truly excellent piece of comic book sci-fi with a healthy and well-executed dose of political intrigue. Continuing the theme from Aquaman: Rebirth #1, we’re centered firmly on Aquaman’s efforts to join land and sea. Namely his opening of Spindrift Station, an embassy between Atlantis and the surface. Dan Abnett has done such a good job on every level here. Arthur and Mera’s relationship is cemented further in the first few week’s pages and their conversation not only gives a bit more meat to their relationship but provides context for the embassy opening. Without being long-winded or ham-fisted, Abnett makes you care about Mera and understand the stakes behind the embassy in a very short period.

He then makes the genius decision to shift the point of view entirely. While we could have seen the embassy open from Aquaman’s point of view, it perhaps wouldn’t have given the right sense of scale. By switching to the Royal Navy Ambassador, Joanna Stubbs, it makes the whole ordeal that much more impressive. We get a sense of just how big a deal this is and a perspective on Atlantean culture and people that may not have otherwise been provided. Most importantly it makes Aquaman’s eventual entrance that much more grand. Abnett reminds us (not that subtly) that Aquaman is both a superhero and a king. This makes the slow, thoughtful beginning that much more of a contrast to the sudden and violent ending that we get. Brad Walker’s art is also to be commended. It’s strong and precise, with each panel selected carefully. It’s nothing I’ve not seen before, but it’s always good to see something classic executed well. Aquaman is so far a real standout, and if Abnett manages to keep this kind of quality up, I and many other readers will be incredibly happy. 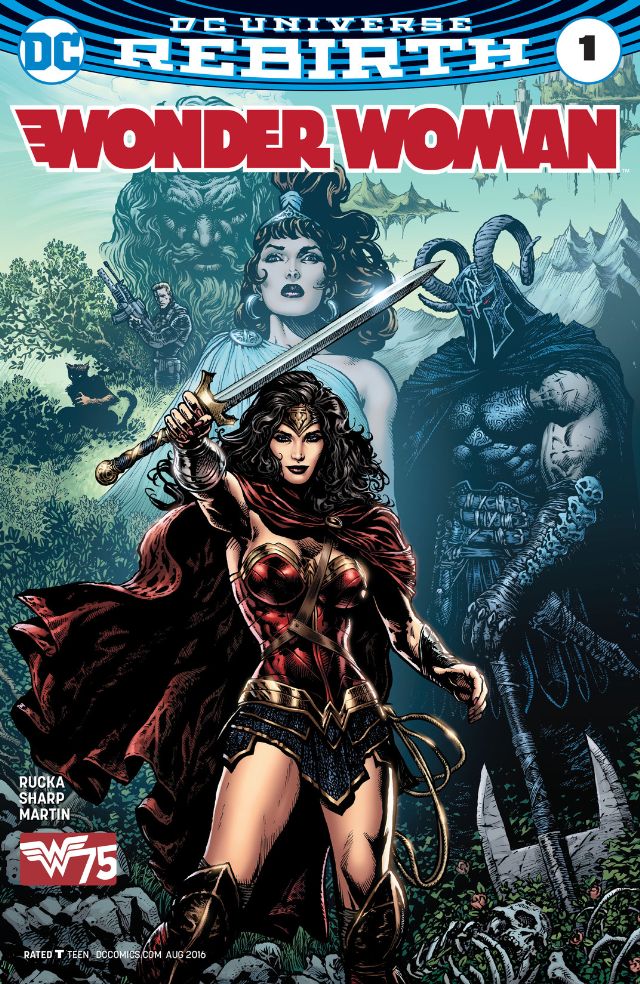 The cover. My goodness that cover. It’s so good. I can’t get over how good it is. Well, anyway. Expectations are pretty high for this one. Greg Rucka is regarded as easily one of the best Wonder Woman writers around and while Wonder Woman: Rebirth #1 was a little odd, it was still fantastic. Not only did it acknowledge the mistakes of the past, it actually used them as a launching point for the next arc with Wonder Woman now determined to discover just what exactly is the truth about her past.

Potentially the best Rebirth comic yet. What is immediately obvious here is just how gorgeous the comic is. Every bit of the art is exactly where it should be. Lines, inks, colours, even panel layout is adding to the story. There are even a couple bits this issue that are fun to just look at — that is the kind of quality we’re talking about here. There’s this very subtle difference too, between Wonder Woman’s sections and the mortals discussing her. It’s only a slight shift in pallet and hue, but it’s enough to place Wonder Woman firmly in a world other than our own. This difference extends to the actual writing as well. Wonder Woman looks and reads like a Greek myth, there a shadowy grandness to her pictures and to her speech. It makes her feel like a genuine, old-style hero and it is seriously quite cool. This makes the people talking about her in parallel that much more normal, despite talking about a superhero wandering through the back-jungle of an African nation. This contrast, this clear effort to make Wonder Woman apart from the normal world, really makes it all that much more enjoyable and makes me incredibly excited for the rest of the series. With the next issue kicking off a separate arc and the next part of this story not till next month, August can’t come soon enough. 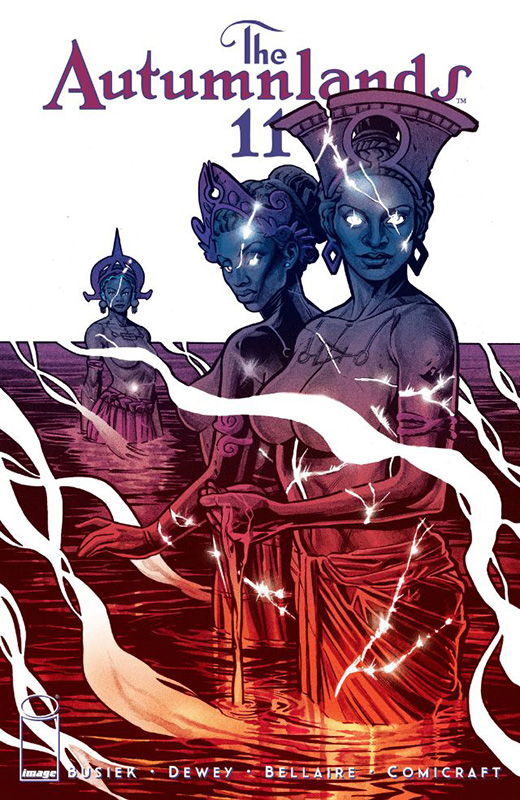 Sketchy. It’s a been a while since the last issue of Kurt Busiek’s anthropomorphic fantasy tale, which is par for the course really. One can’t complain as it is consistently one the strongest comics around. With the champion, Leroy, and the dog wizard Dunstin, attacked by a mutant goat monster at the end of the last issue, I’m keen to see the teams take on a large scale, monstrous battle. The fight against the bison in issue 6 was excellent, so here’s hoping for more of that.

An excellent set up issue that, as per usual, raises more questions than it answers. The fight against the goat-monster is excellently epic with a healthy dose of magic. Special mention has to go the traditional second page splash which this week is a simply gorgeous rendition of the battle that I would happily throw up on my wall. The battle is handled well, and unlike previous issues, Leroy does not in fact save the day. Dusty does. It’s great to see him coming to the fore after all this time, and I’m looking forward to how the consequences of his magic will be dealt with. The battle was surprisingly poignant at the end and I’m particularly excited to see Aelbert join the gang on a full time basis. Leroy and Dusty have a good dynamic, but I have to wonder how long it could have gone on for without becoming stale.

The latter half of the issue, where our heroes finally met the mysterious statue women, is also good. Without spoiling too much, it is a bit of story that is very typical of The Autumnlands. Namely, it’s very difficult to understand just what happening. Not on a surface level of course, but rather, what’s happening behind the scenes. Who are these women? Why are they here doing what they’re doing? None of these questions are answered in the slightest and, while the payoff will no doubt be worth it, it does make the issue a very slight let down from last month. It feels like there’s no real reward. Considering there’s such a gap between issues, it is mildly frustrating. Nevertheless, this is still The Autumnlands, and with some big things to no doubt come, you’d be mad not to pick it up.