Here we go folks, the latest comics for the week of May 17th! Each week GeeklyInc takes a look at the new releases and weighs them up. First up this week is the end of the New 52’s Green Lantern before DC Rebirth at the end of the month. 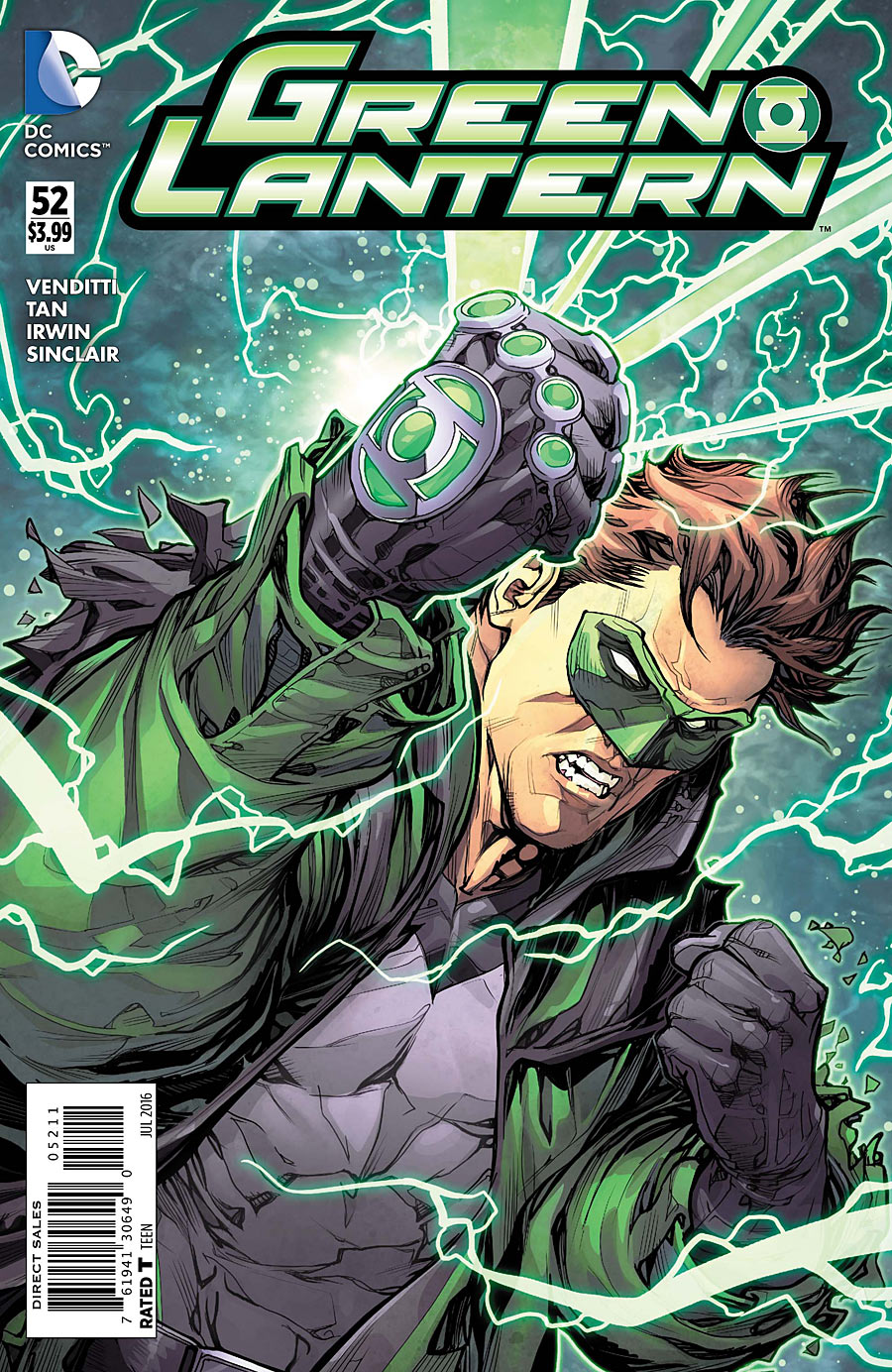 First Impressions: This is it. The big one. Robert Venditti’s chance to close a several yearlong run in a big way and usher in a new Green Lantern era. Honestly, my expectations are pretty low. The previous issue was decent, but that was it. I wouldn’t condemn it, but I’d hardly be willing to recommend it. I just don’t think that Venditti has the time or the space to close this current story arc the way it needs to be. There are just too many loose threads. Hal Jordan/Parralax has escaped from another universe and is looking to take our hero out, that very same hero is sporadically turning into pure energy and the Gray Agents have kidnapped Virgo, Trapper and Darlene the spaceship (the only worthy additions that Venditi has contributed to the Green Lantern mythos). While Howard Porter has contributed a super cool cover this month, and I’m open to the idea of being wrong, I feel like I’m going to be disappointed yet again.

Verdict: If I could type out me shrugging my shoulders, I would. A serviceable, but hardly exciting end to the run before Rebirth. Venditti thankfully doesn’t try and wrap everything up in a single issue (not that I seriously thought he would). Rather, he goes for a classic space-cop/bounty hunter throw-down. Much like the fight with Parrallax, Venditti has crafted the action well with the fight progressing pretty smoothly and the whole thing stays interesting throughout. Helping this along is Billy Tan’s art which is, like the previous issue, lovely and crisp. He’s also done a great job of making each Grey Agent stand out; it gives a real dynamic quality to the team and makes me mildly excited for them to (no doubt) appear again.

My only real complaint is that Virgo and Trapper, two of the coolest characters in Green Lantern in a while, are dismissed with little ceremony at the end. After following Hal and gracing our pages for so long, it seemed like an unceremonious way to remove two long standing characters from the series. I will of course be picking up Hal Jordan and The Green Lantern Corps, but really only because I am a glutton for punishment. 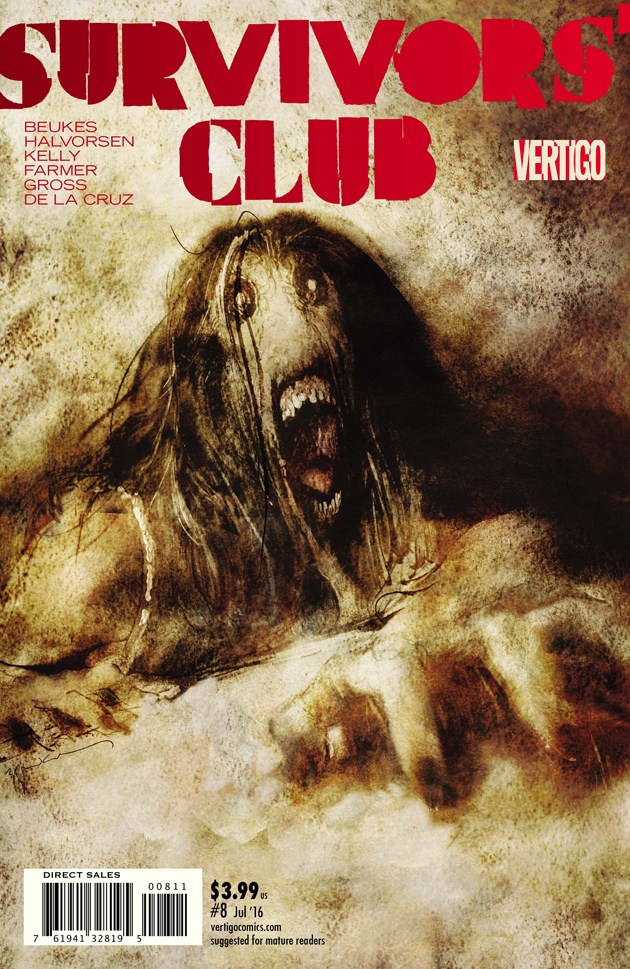 First Impressions: Survivors Club on the other hand has impressed me almost from the start. After a rocky first issue, Halvorsen and Beukes blood-soaked horror about a group of horror movie survivors has morphed into something far more twisted than its premise. With Kiri’s ghost aunt battling the scorpion woman birthed from Teo’s neck, while the evil spirit of Mr Empty terrorises Muskagee house, it’s looking like yet another issue of disturbing excitement. My only question is when it will all end. Obviously a big part of Survivors Club is the constant horror the characters are subjected to, and it’s so far been fantastic. But there is a point where it would be nice to take a breather. I’m just worried that the series will escalate without pause and it’ll all get a little exhausting. But really what’re the chances of that?

Verdict: I’m not sure how to feel. On the one hand, Halvorsen and Beukes have managed to bring Harv and Mr Empty’s saga to a bloody and satisfying close. On the other hand Teo’s battle with ‘Nena’ the scorpion woman was cool, but incredibly rushed for a series that loves the slow payoff. True to form there is horror a plenty with Mr Empty chasing our heroes through an increasingly bizarre Muskagee house while Simon’s dismembered parents occasionally show up. When Alice and her doll-like double Alice begin searching for Harv, things take a turn for the worse with both the house and the panels getting a little M.C Escher.

The art from Ryan Kelly and the colors from Eva De Cruz are simply fantastic this month. There’s no real stand out piece, as the issue looks great from start to finish. Each section of the story looks and feels distinctive. I particularly enjoyed the ‘death’ of Mr Empty with not only the fantastic amounts of blood working well on all three characters caught in the spray, but the incredible cathartic nature of the scene does wonders for Harv’s character. I look forward to whatever it is he does next.

Teo’s storyline was less satisfying. While it was great to have Nena be a manifestation of Teo’s own childhood issues and something he needs to physically confront, it kind of comes out nowhere and feels very rushed. It would have been better if the fight had either gone on longer, or if Nena had gotten away. As it is, a great and creepy villain is done and dusted far too soon. Overall, another great entry into a great series despite a narrative misstep. 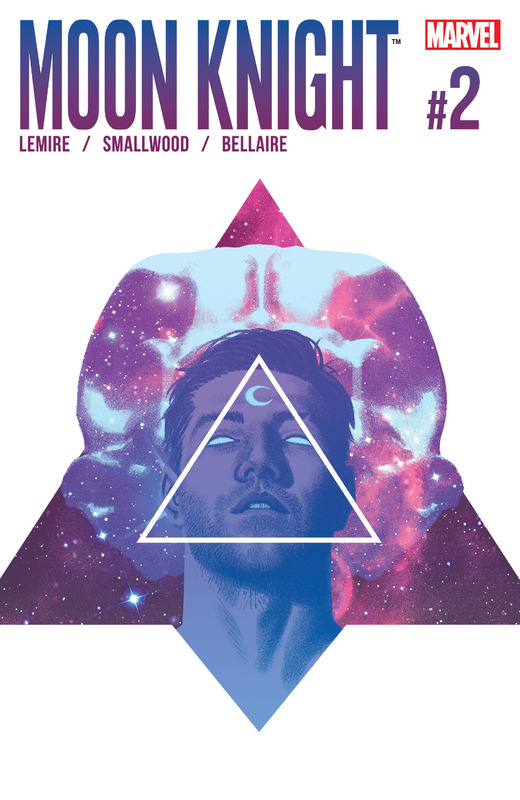 First Impressions: I am thus far very impressed with my first Marvel series ever. Moon Knight is the story of… well I’m not actually 100% sure what it’s about at this point, but it’s pretty cool. Jeff Lemire keeps the story on its toes with some serious questions being raised around whether Marc Spector is actually the servant of the god Khonshu, or if he’s just completely insane. The whole story has this very ethereal feel to it and I genuinely don’t know what to expect this month as we delve deeper into Marc’s psychosis.

Verdict: I doubt if I have ever read a more solid issue 2 before. I love the way Jeff Lemire has created essentially two different characters in one body. Marc Spector is, as Khonshu says, weak. His sequences are fragmented, filled with notebook scrawling’s and genuine doubt about the nature of reality. I loved the way Marc’s vision of Khonshu was a brief insight into the lore of the world without giving too much away. Moon Knight is shaping to be a series where the joy is in the unknown.

What I particularly liked was the way Marc was literally the servant of Khonshu. He’s not his emissary or partner, he is fully subservient. It makes his mental and ultimately physical prison break and transformation into ‘Mr Knight’ all that more satisfying. Greg Smallwood’s art is once again perfectly suited to the series, with a splash page of Marc’s insane ramblings on a notebook serving to root us firmly into his broken mind. Equally the way that each portion of the story not only looks different but appears to have been done in a slightly different style really helps the story barrel along. With everything picking up in the last few pages and a host of new characters arriving, I am almost salivating in anticipation for the next issue. Subscribe immediately.