Rebirth is here! Darkseid War is here! This weeks comics are here! And that means we’ll be sitting down to have a look through their pages and sort out whats what. The highlight this week is of course, the much awaited DC Universe: Rebirth, but first up, the penultimate chapter of Edge of Oblivion. 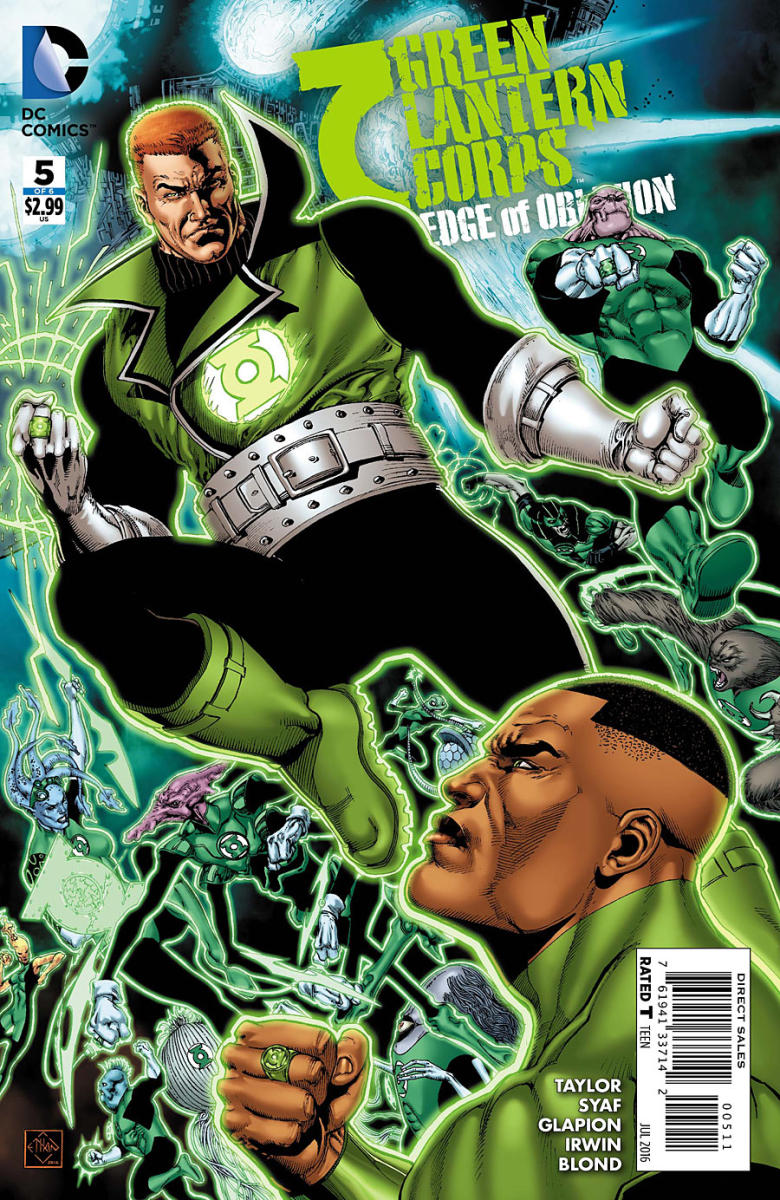 This thing has been uneven to the max from day one. The previous issue may have had a little bit of punch that earlier issues lacked, but it’s just not enough to make up for the whole series being a bit weak. Potentially it’s because this is the week of DC Universe: Rebirth and in the grand scheme, none of this matters. The stakes have certainly been raised with the Green Lanterns seemingly poised to do battle with Asuras and Dismas on the last inhabited world of this universe. And if that wasn’t quite enough, the universe is about end.

The cover for this month does not make me particularly hopeful. The idea of lanterns fighting lanterns is tired. It needs to be tucked in, sung a song and put to bed at this point. But hey, I was pleasantly surprised last issue with something that wasn’t awful; maybe lightning does indeed strike twice?

Pleasantly Surprised 2: Electric Boogaloo. Maybe it was the fact that Taylor gave more time for character, had more exciting action sequences, or perhaps he held his tongue in the right place; but I actually quite enjoyed this one. Guy is quickly subdued after coming under the control of Asuras and Dismas, and a plan against the two world-eaters is formed. With the rest of the lanterns under their control, it all looks rather bleak until the oft hinted at Iolande comes to the rescue with the rest of the corps.

The biggest hint that this issue was better than the ones that came before it, is that when I arrived at the end, I was actually slightly disappointed. I wanted to know how Mogo would help the corps defeat Asuras and Dismas. I had a genuine desire to find out what happened in the end. Thankfully, a very small part of the issue was devoted to the corps infighting; instead we were given an unfolding of their master plan to take down Asuras and Dismas. There was even a small piece of character building with Guy Gardner determined to take the hits for the corps, much in the same way he did for his mother when his father had a little too much to drink. It’s nice and serves to give a little bit more of a connection to Guy.

Unfortunately, while this is all good and Adrian Syaf’s art is excellent, it feels too little too late. If the next issue is anything like this, the ending will be strong, but let down by a very weak beginning. 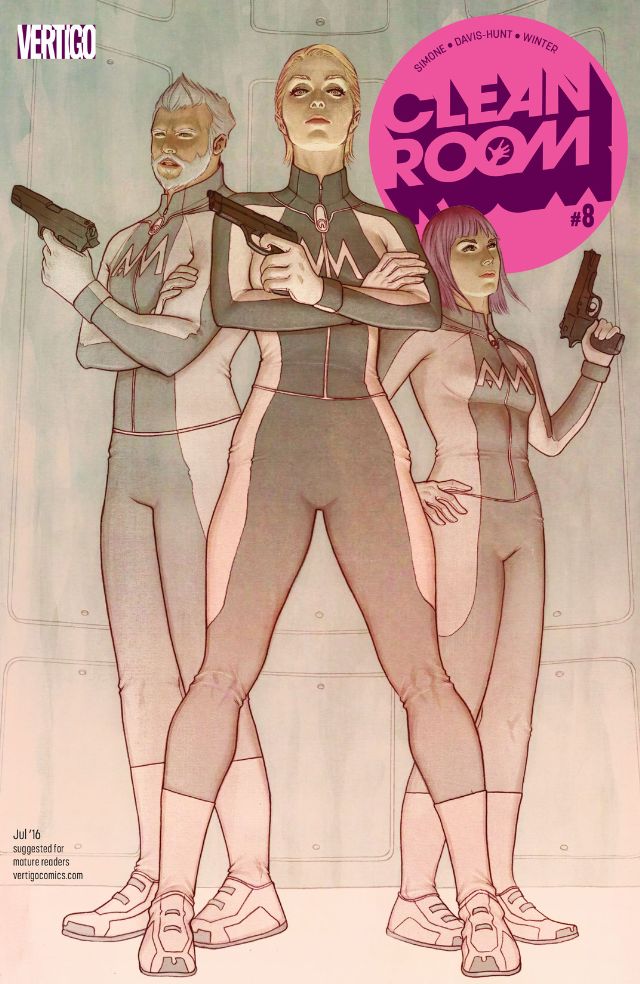 After a rollercoaster first 6 issues, we took a bit of time last month to get to know Astrid Mueller. Self-help guru, corporate overlord and apparently, gifted with the ability to see aliens. Or something. After narrowly averting disaster in issue #6 and all but confirming that Astrid’s various power plays are nothing more than a means to protect the planet, I’m curious to see where this all goes.

If the cover is any indication, we’re set to learn even more about Astrid this week, which is great. She’s rather quickly and mercilessly come to the fore as the second main character alongside Chloe, so more information about her is always welcome. But I can’t help but feel sorry for Chloe. She’s just not as interesting as Astrid, and lately hasn’t had a whole lot to do. With her teaming up with Detective Avil Demakos, perhaps that’ll change sometime soon?

Hot damn, what a cracker. I don’t normally say this, but if you are a reader of Clean Room and haven’t read this latest issue, then get right to it. It’s got such a twist and a stellar opening; I don’t want to ruin it. Read it? Great. So, how about that opener?

Having Astrid completely taken out of the game after building her up like she did is a genius move on Simone’s part. It shakes the whole story up without being corny and really helps put the focus back on Chloe, while no doubt kicking off our next story arc. What I particularly enjoyed was the way Astrid begins this issue in a position of power, giving one of her famous talks, before being so quickly gunned down. It makes the moment so much more powerful as, until now, we’ve always seen Astrid in that position of power. And of course, Chloe’s power play of bringing Spark into the Clean Room is sure to develop into something quite fantastic.

Jon Davis-Hunt’s art is up there with the story as well. It’s clear, crisp and excellently executed. There’s an obvious care taken here, and it’s a real pleasure to read. The real highlight of course is Spark half tearing his way out of his human body; Davis-Hunt’s talent for disturbing body-horror is on full display. Clean Room has honestly jumped from strength to strength, and this issue is a particularly strong one. 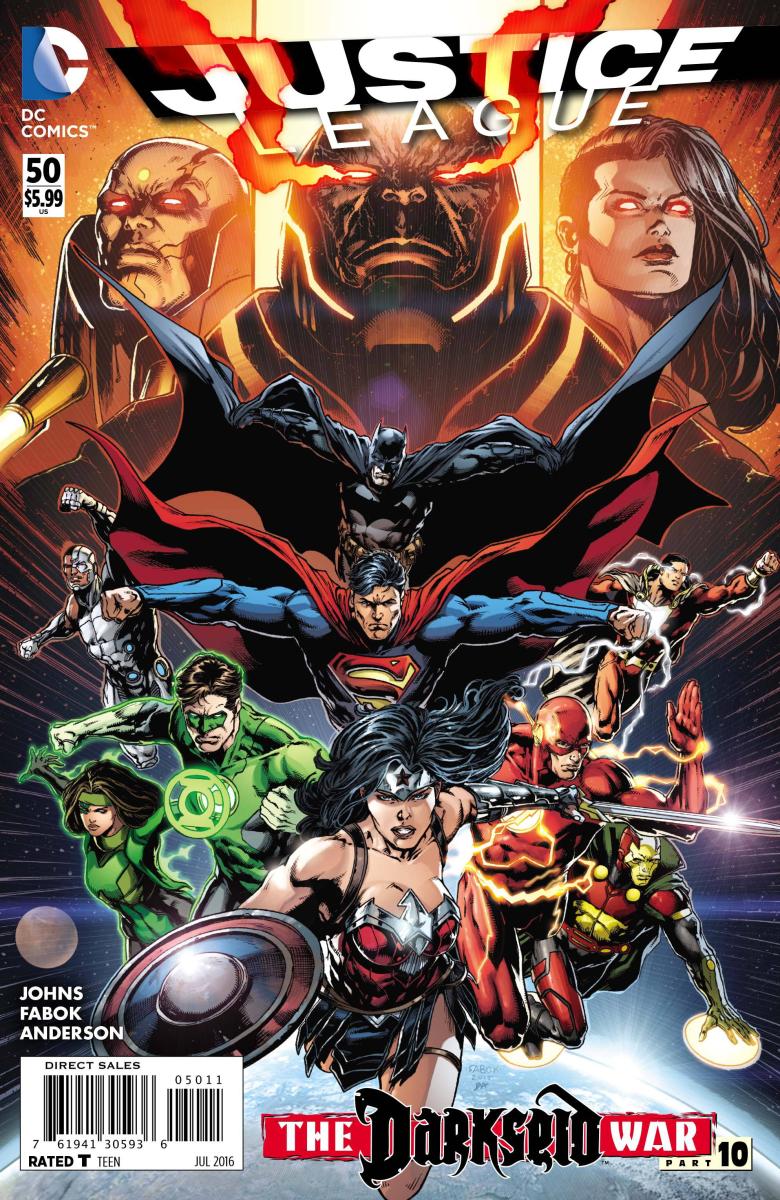 I’m excited. I’m very, very excited. I enjoy comic books as a medium for visually and literarily exploring ideas. Equally, I enjoy them as a way to see really cool shit happen and go “wow, that was cool”. So, I’m excited. Darkseid War has been several months in the telling and, while the last issue was something of a jumble, Geoff Johns does write fairly solid conclusions to his events. And with a double sized issue this month, he’s got plenty of room to do so. Considering what’s happened before, he needs the extra space.

With Darkseid dead at the hands of the universe destroying Anti-Monitor, the Justice League, infused with his energy and turned into gods, Ultrawoman (from Earth 3 no less) having just given birth and Darkseid’s daughter Grail arriving back on Earth with a super-powered Steve Trevor — there are a hell of a lot of threads to tie up here. I’m incredibly curious to see how the whole thing plays out, especially considering that this is the issue that leads straight into DC Universe: Rebirth. High stakes, and high hopes.

Unlike last month’s issue, there was a good sense of coherence this time round and the action was very easy to follow. And there was, let’s be honest, quite a lot of it. Too much, even, to recap. Needless to say, our heroes were eventually victorious. I particularly enjoyed the (somewhat ridiculous) way that Johns ramped the action up every few pages, unveiling yet another, larger threat for the league to contend with. Yes it felt a little silly, but John’s treats the material with such an earnest feeling that you can’t help but gasp to yourself as Ultrawomans glowing baby absorbs a variety of power and turns into Darkseid.

Complimenting this is Jason Fabok’s art which is, per usual, stellar and very pleasant to look at. He seems to be having a total ball on this issue with some of the series biggest and flashiest action scenes and splashes. Seriously, Fabok is an artist to keep an eye out for; whatever he does is bound to be outstanding. The entire package is great; lines, colors and inks.

Overall, a spectacularly epic conclusion to a spectacularly epic, and ambitious, story. Geoff Johns does what I genuinely doubted he could and brings the entire Darkseid War saga to a satisfying, confusing, and bombastic close that alters the DC Universe for the near future and leaves me with 1,000 questions. 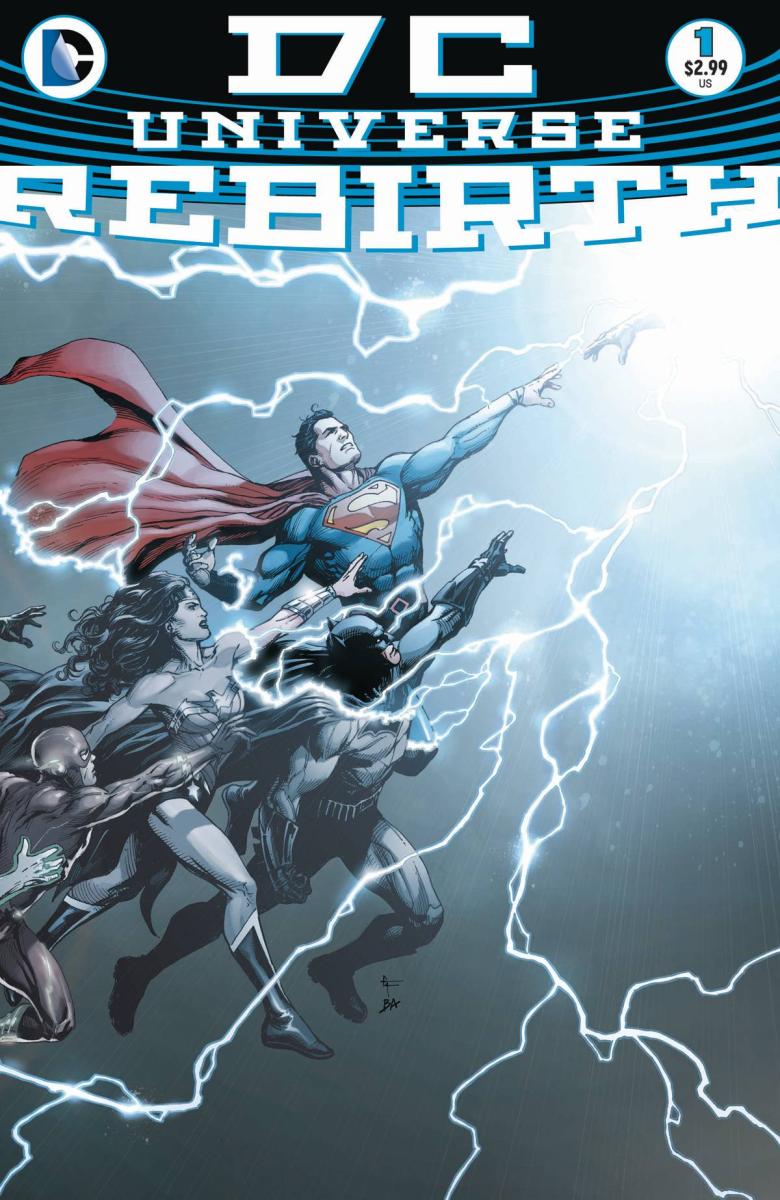 The previews look good (the few I’ve looked at), initial review are positive, and DC themselves are positive. I admit freely, I’ve given into the hype. I’ve not been this excited to read an issue of a comic for several years. I feel like I’m about to read something genuinely very exciting that will make me excited to read DC all over again. I can’t even use this space to speculate on the plot. Yes, I am aware that details of it have been revealed and teased for months, but I’ve stayed away. I want a fresh experience. And now, I can’t wait any longer.

I’ll keep this verdict short as the story is too excellent to really spoil. DC Universe: Rebirth is everything I had hoped for. It acknowledges the somewhat dour tone of the New 52, concedes that legacy is an important factor in telling comic book stories, and sets a hopeful tone for the rest of the universe. The New 52’s re-launch event Flashpoint was a total, hard reset. It felt like the New 52 was the unwelcome result of a time-related disaster. Rebirth feels like the first step towards not only a better future, but the future that we should have always had.

Comic-related pontificating aside, the issue is actually very good. It’s exciting, it’s (at times) emotional, excellently written of course, very well drawn, and above all bloody interesting. If Dc Universe: Rebirth is an indication of what is to come for DC over the next few years, I am incredibly excited. Not to mention that twist at the end which was the first comic page in a while make me audibly say “holy shit” to myself in a very long time. If you’re looking to jump onto DC in the wake of Rebirth, this is a great place to start.