Wonderblood, by author Julia Whicker, is an exploration of science, magic and religion. The novel follows protagonist, Aurora, a fourteen year old girl who goes from carnival member to queen. This novel uses universal themes to navigate a future society where people worship the remains of NASA.

So what happens when future humans find space shuttle pieces and seek to know more about how their destiny connects to the stars? You have to read Wonderblood to find out.  The protagonist, Aurora, is a girl who marries an older man for the sake of legitimizing his royal claim. Don’t worry, it’s not a Game of Thrones type of battle over who gets the throne but seeing what True King David aka Mr. Capulatio will do to become sole ruler is pretty interesting. 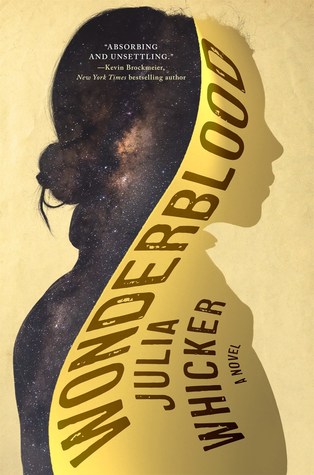 Wonderblood places magic and religion in harmony: astrology and astronomy are held in high regard though other forms of science are not. This creates a nuanced and dimensional post-apocalyptic world. As seen in history, magic and contemporary religion often don’t go hand in hand. There’s typically a power struggle between the two, which often religion is the champion of. To see magic and religion coexisting is reminiscent of older belief systems such as Wicca. Whicker doesn’t shy from the idea that without societal structure, our species will revert to earlier traditions.

I enjoyed the concept of “what would future humans think of the things we have today.” There’s a reverence for characters who descended from astronauts, a perception that those who have come from people who left earth for the heavens must be divine. “Marvel did believe that men had once walked on the moon, and if she was their descendant then she must possess certain powers. Of that there was no question.” To take something so calculated like space travel and explore it as though it were spiritual not only is creative but incredibly fascinating. Whicker handles this balance beautifully, taking moments to explain what’s going on while keeping things natural.

People often view magic as a simple, pleasant thing but it’s more complex than a magician who performs at children’s birthday parties. Whicker not only doesn’t shy away from these complexities but compounds them. This novels touches on incredibly heavy themes with style and grace.

As a Floridian, I enjoyed the mentions of landmarks and the variations of their names in the future. Once again, Whicker balances the known and unknown. Lines like “only idiots and magicians are from Florida” adds humor to a high-stakes situation. The thing about post-apocalyptic worlds is that the characters’ past is the reader’s present, which allows the author to make little nods to current life. The mention of disease and the question of who the astronauts were and how they lived makes the reader wonder about our own mythologies.

The narrative doesn’t just focus on Aurora. As the story moves, the reader is introduced to multiple characters giving a glimpse into the other perspectives of the events. There’s a connection between characters but the chapters read like individual moments. This kept up momentum, whereas some post apocalyptic and/or science fiction novels spend too much time explaining instead of leaving breadcrumbs and trusting the reader to come to their own conclusions. There’s explanation of the past events which lead up to the beginning of the book without weighing down the story line.

Though I understood why the author decided to showcase other characters, I found myself viewing Aurora as more of a supporting character instead of protagonist. I found myself curious about David Capulatio and how he rose to power. His background is given just is Aurora’s but there’s this sense of realness about him that I didn’t necessarily glean from Aurora. Wonderblood is her story yet I found myself straining to understand her connection to it on a subconscious level. Her resilience and adaptation is quite obvious but I just found myself caring more about the other characters.

I may not have been ecstatic about the protagonist character development but the magic is quite honestly in the prose, where Whicker’s poetic ability shines through. “Magic, like nostalgia, was like a lie; empty and full at once.” There were some passages that read so poetically that I had to read again to confirm I was understanding what the author was actually saying. There’s a lot of coyness in this novel, hinting and moments of peek-a-boo that aren’t confirmed until later. The entire novel is peppered with concise one liners that are truly breathtaking. Julia Whicker is a graduate of the Iowa Writer’s Workshop and recipient of the Capote Fellowship and the Teaching-Writing Fellowship. She’s also a poet, whose work has been published in the Iowa Review, Word Riot and many more.

Wonderblood takes elements not often perceived to be in the same realm of regard and makes them effortless and believable together. I heard once that “magic is only science we don’t yet understand” and Whicker makes that obvious to the reader while slowly revealing this fact to the characters. The author allows the reader a permanent seat next to the narrator as everything unfolds making this novel an experience reminiscent of cinema.