The Arkham Horror line of games from Fantasy Flight is constantly growing. The latest game to join the line is Arkham Horror: The Card Game, a living card game. A living card game means that all the expansions and packs released are standardized. With an expansion and new scenario pack already announced, Fantasy Flight seems ready to support this new game with a several releases of new material. Before we jump too far ahead though, let’s take a look at the core set releasing this month. 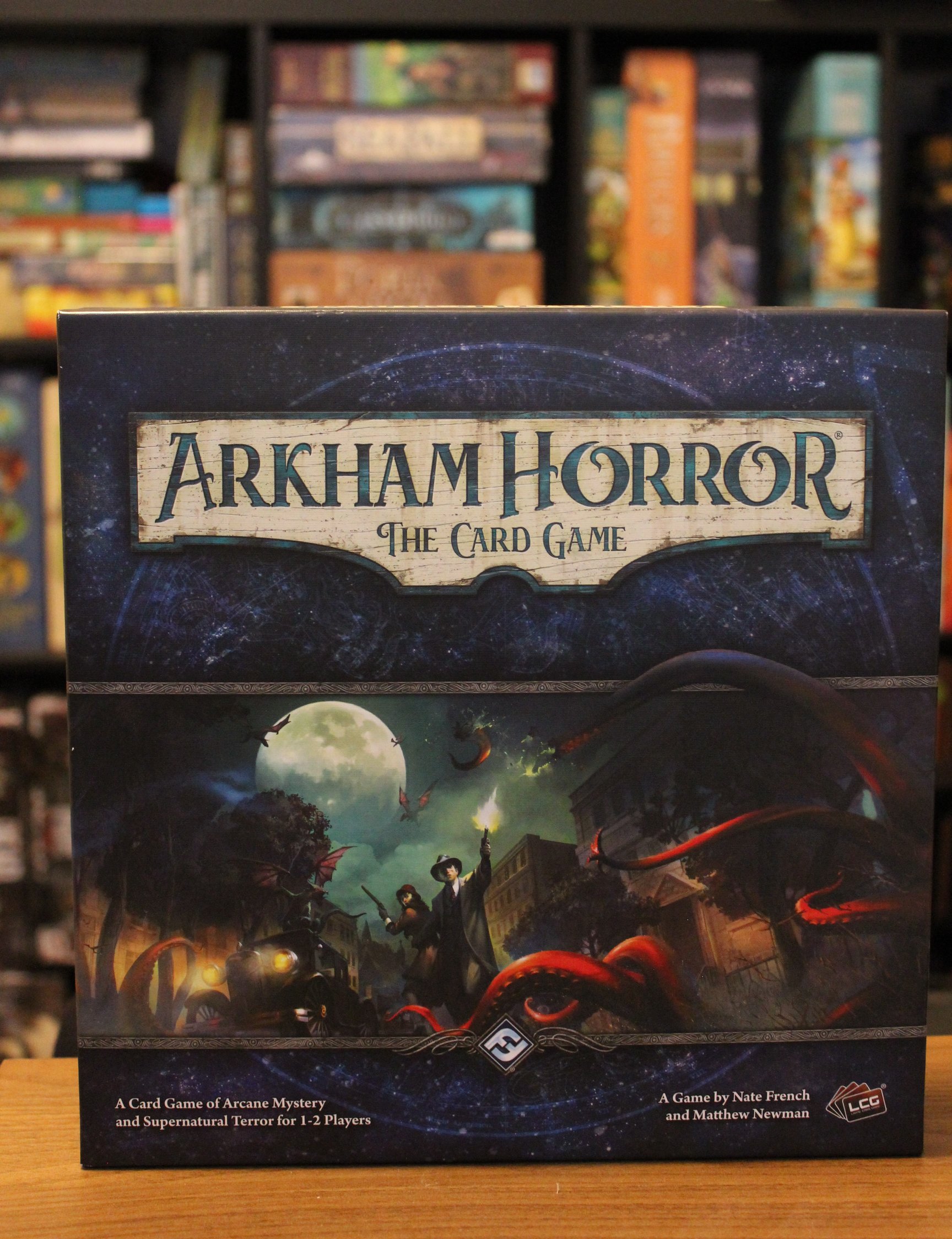 Arkham Horror: The Card Game is intended to be played over a campaign that weaves different scenarios into a cohesive story. Each player controls an investigator that is plunged into a world of strange beings and mind bending visions. The core set contains the campaign “Night of the Zealot” which starts innocently enough, when the door to your study suddenly vanishes. This simple start to the game leads players across three scenarios each with their own objectives, until the resolution. Multiple resolution to each scenario are possible so don’t take your decisions lightly. The cards in your deck will represent different skills, assets, or events that can help you solve the mysteries gripping your town.

For the game, play is broken down into four different phases that repeat until the conclusion of the game. Players begin in the “Mythos Phase” (although it is skipped in the first turn) with a doom token being placed on the current agenda and each player drawing an encounter card. So far the encounter cards I have played have all been hindrances for investigators. For example, dissonant voices could creep into your mind and limit the actions available this turn. Testing one of the investigators’ skills may be required to resist the effects of these cards. 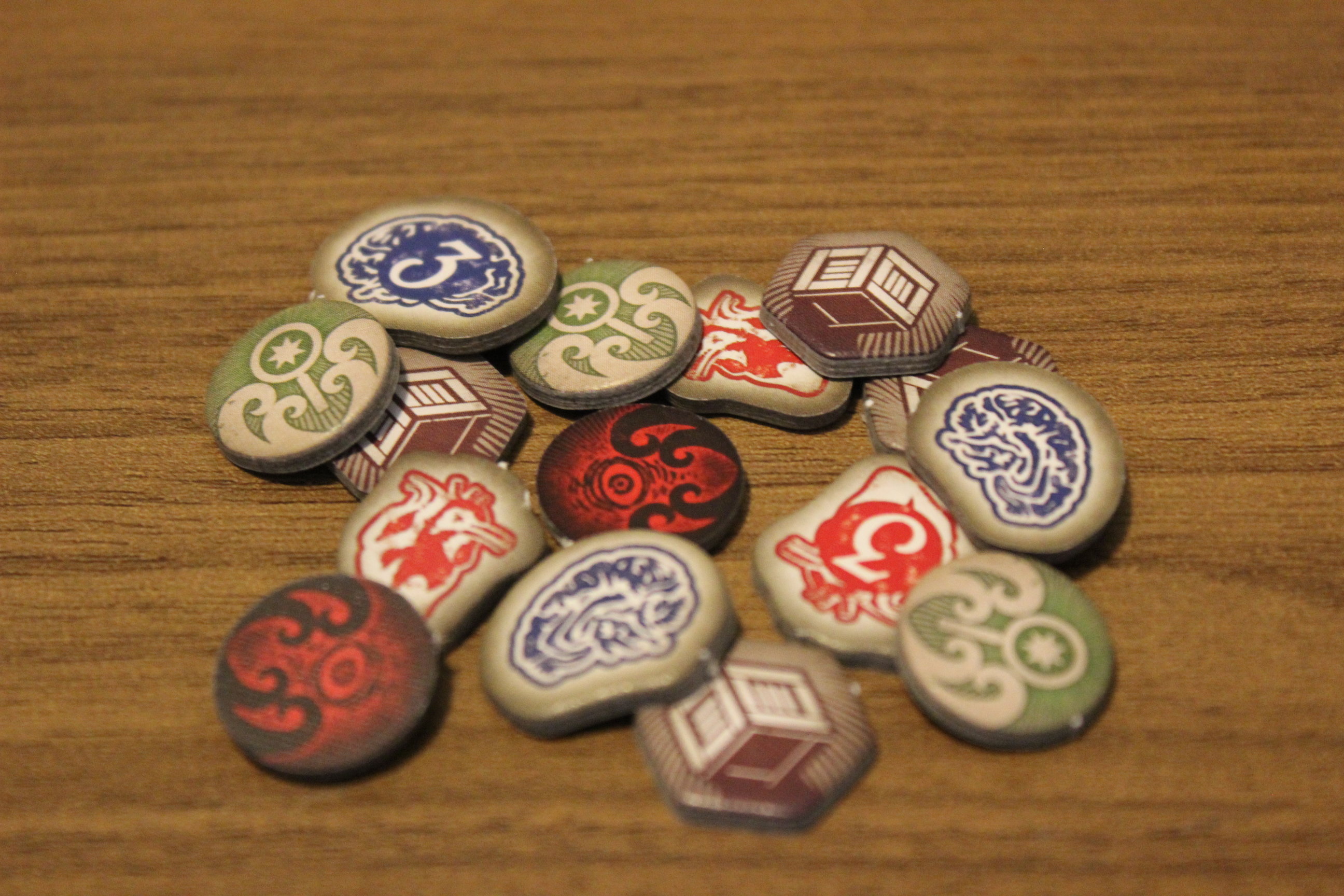 If an encounter calls for a test it will give you threshold to pass, you will compare the investigator’s skill level to that value. Players can contribute cards containing the symbol of the test and add to the investigators value. Given that this is an Arkham Horror game there always has to be a higher chance of failure than success. The player testing a skill will have to pull from a bag to reveal a token that either contains a value modifier or a token with a symbol. Symbols can range from outright failure, no matter what players value is at, to unhinging an investigator’s hidden power. Distribution of the tokens in the bag is dependent on the scenario as well as the difficulty players decide on at the beginning. 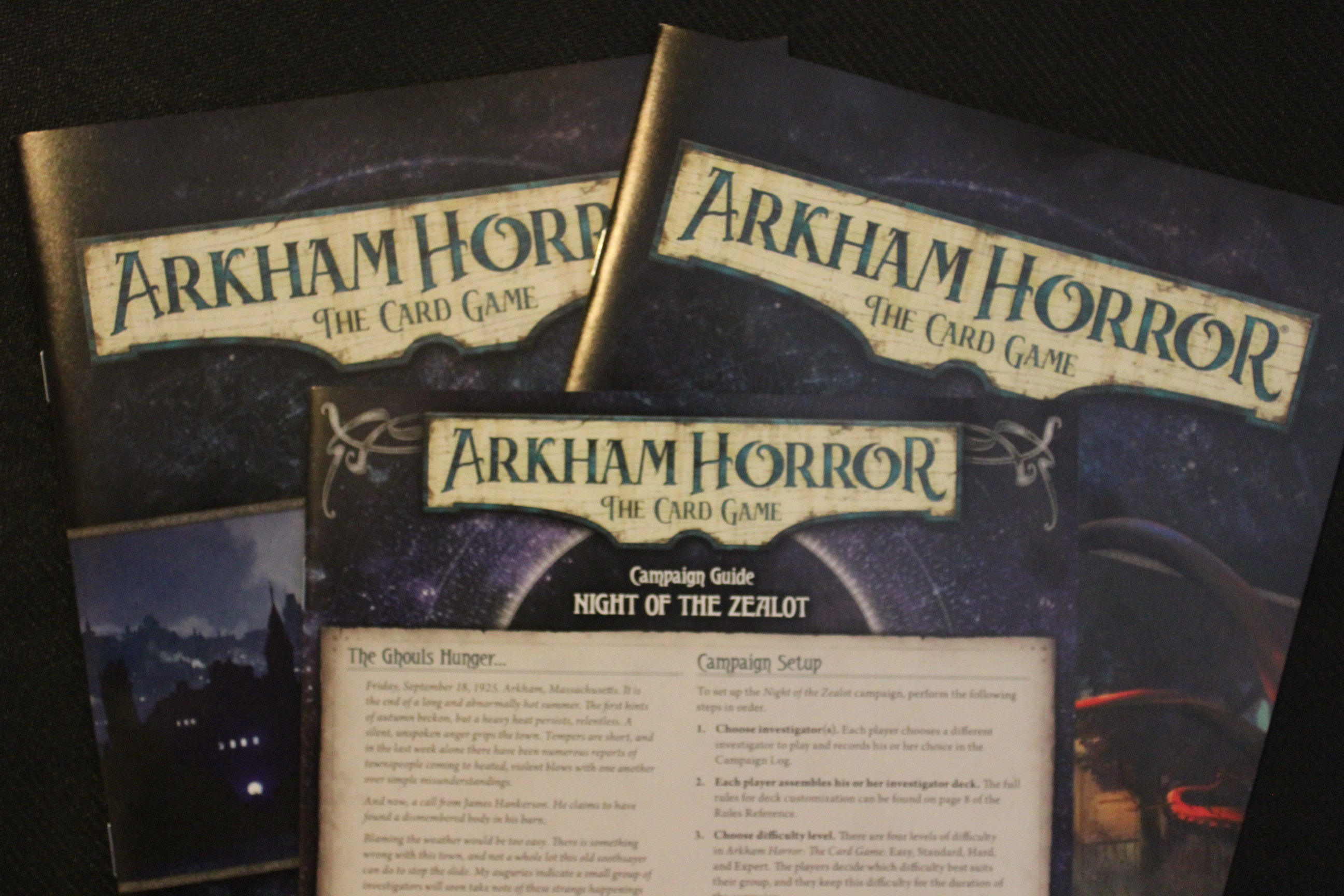 Next is the “Investigator Phase” where players can take three actions. Player actions range from testing skills, drawing cards, attacking/evade creatures, gathering resources (which act as a currency in this game), activating previously played cards, and moving. While this is a card game and does not include a board or miniatures, movement is a large component to game play. If there are enemies in play they take their actions after the players. Mostly they will be attacking characters or moving into areas with investigators, in order to attack on their next turn. Once all the enemies have had their turn, the “Upkeep Phase” is last. This is where most of the house keeping is done, when exhausted cards are readied, players gain one resource, and draw a card.

Five investigators come in this core set, however you won’t be able to play with the suggested builds with all of them. All characters have a main class and a sub class from which they can access cards. For example, Roland Banks is the main class Enforcer and subclass Seeker. To build his suggested deck you need to use all the Enforcer class cards and all the Seeker class cards. This would prevent you from building the suggested decks for Daisy Walker (Seeker main class), or Skids O’Toole (Enforcer subclass), due to all you cards being used in the Roland Banks. Role playing as your investigator is very encouraged. Choices need to be made in the campaign and the immersive text wraps you into this world, making the barrier to roleplaying lower. You can leverage the deck building aspect to develop a backstory for your character. Players can also think about how their investigators interact with each other; would the ex-con be attracted to the waitress with a mystical look in her eye, or perhaps the strong willed street urchin that has a mysterious and valuable necklace. 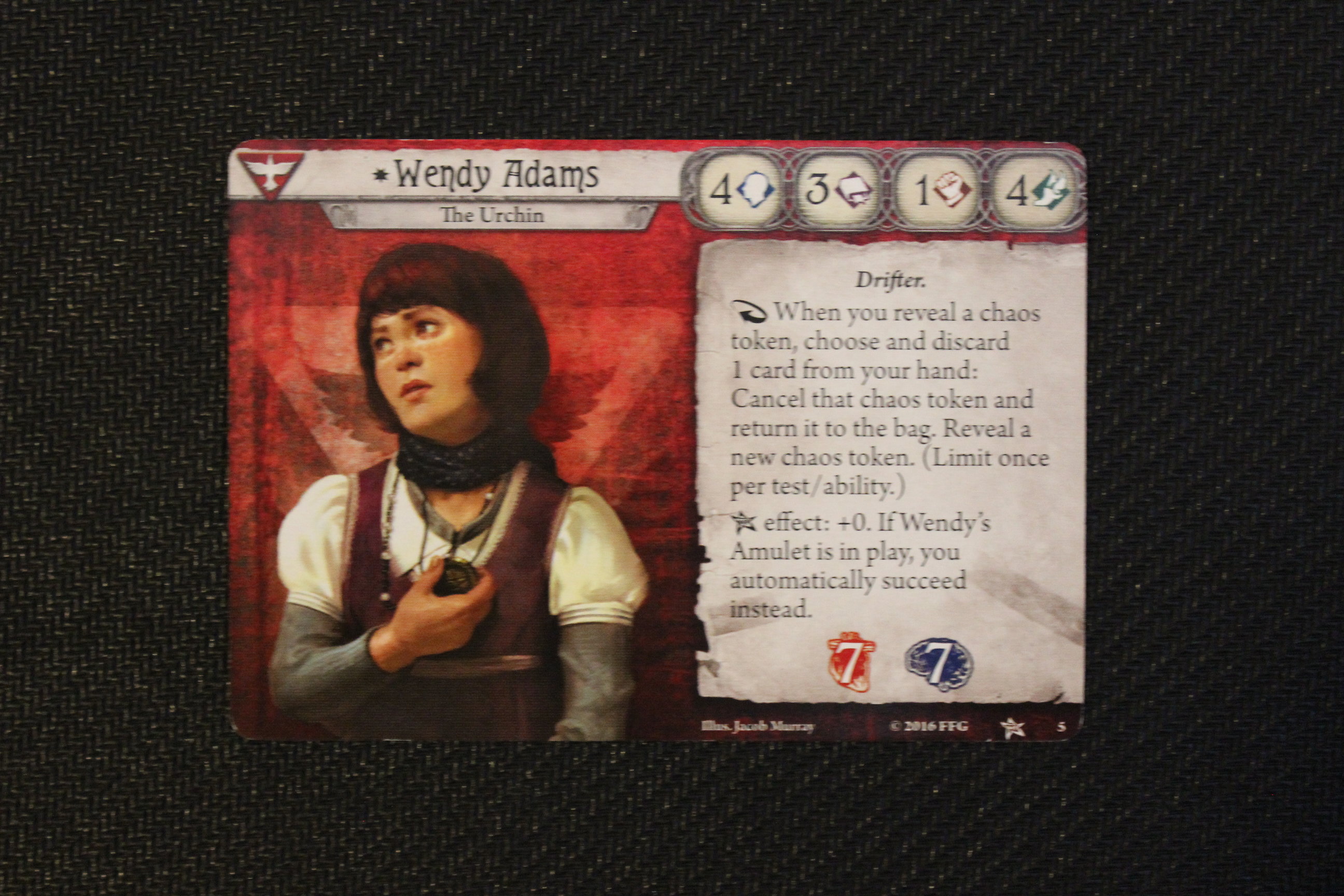 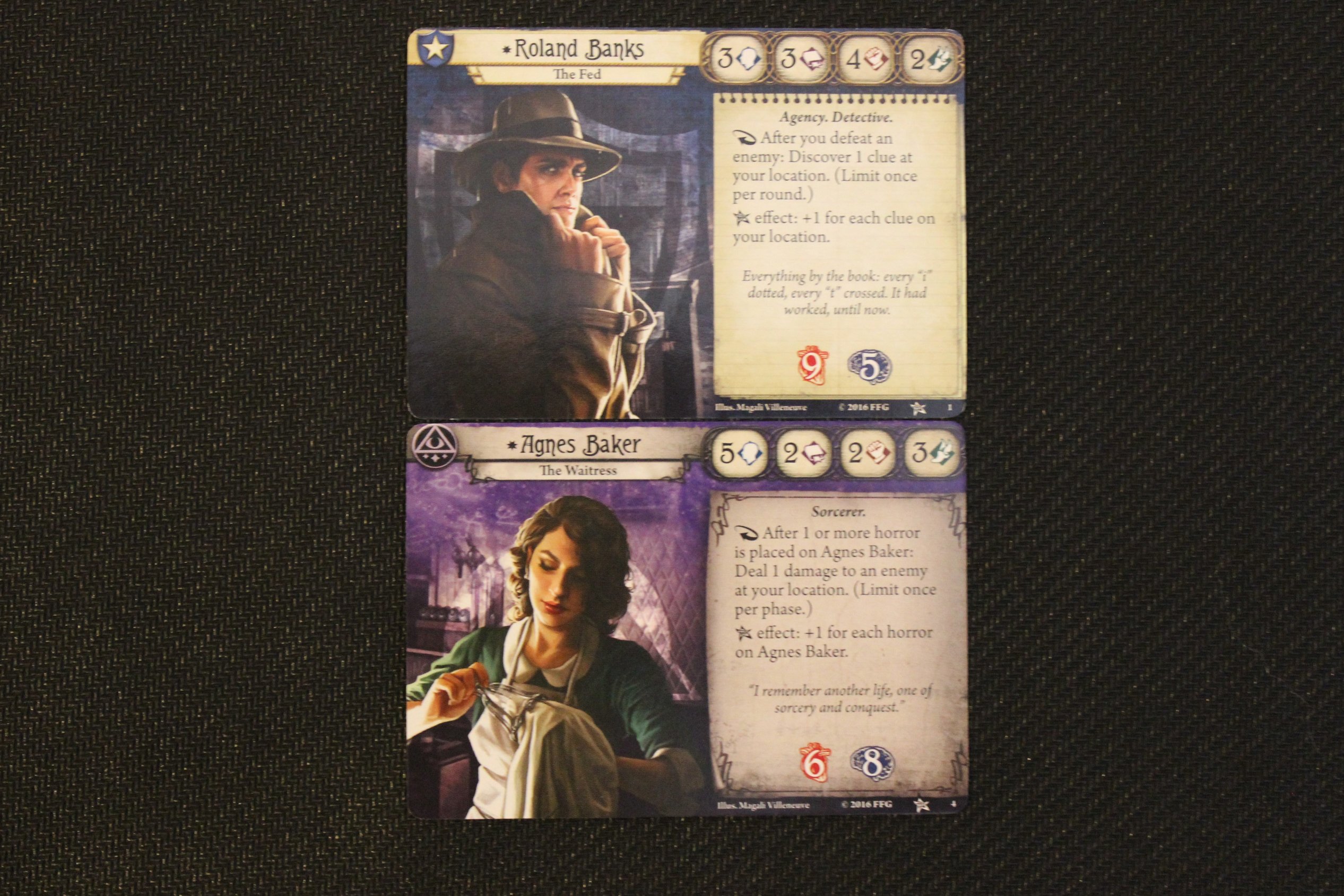 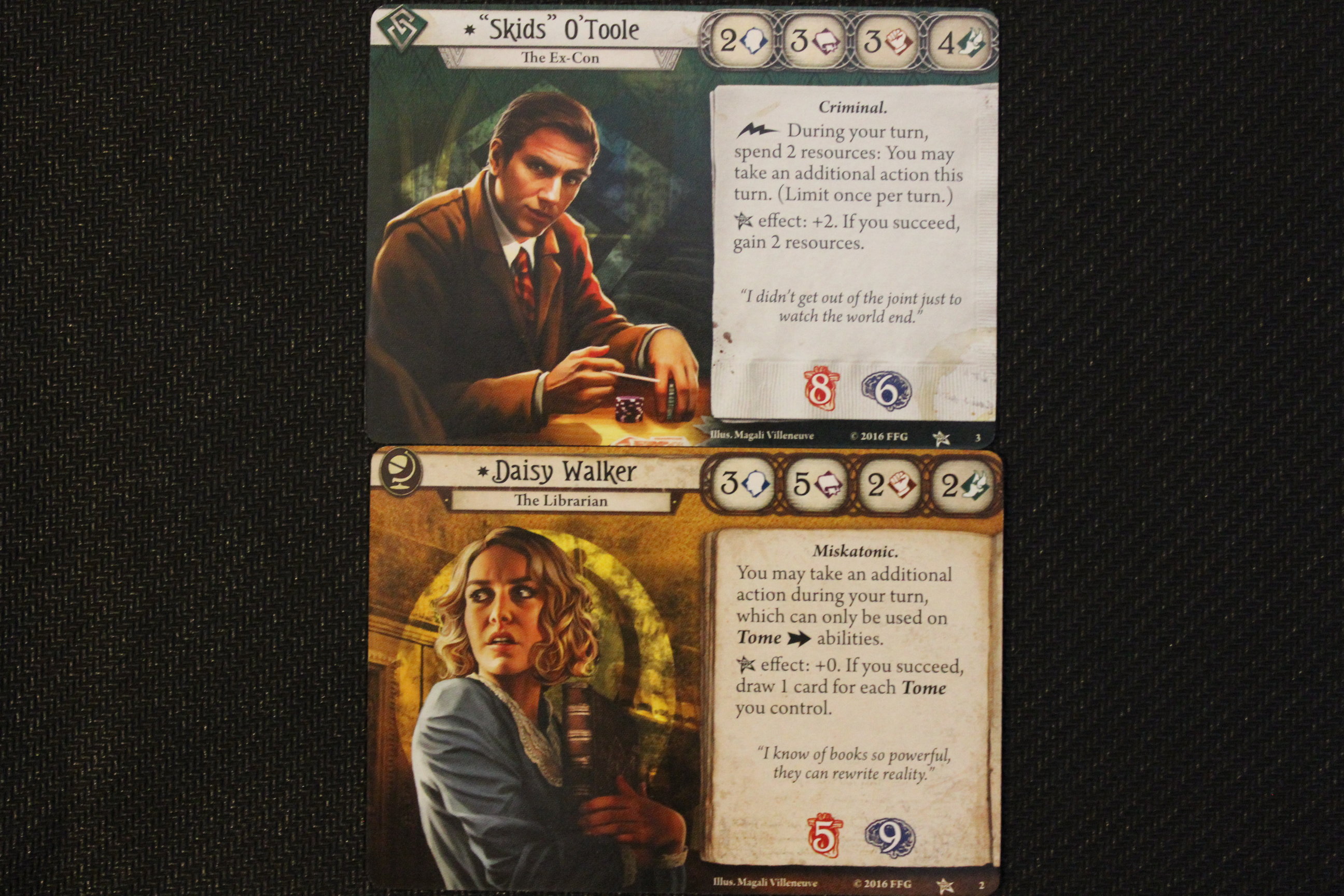 One of the aspects Arkham Horror: The Card Game boasts is the customization of decks. While that is true the game does not force you to use the suggested decks and players are encouraged to custom build decks, the game just seems less accessible this way. I would prefer to be able to play the character I like without having to explore the intricacies of deck building. With future expansions this aspect could go away as more characters or class cards become available.

I am very impressed with the presentation of Arkham Horror: The Card Game with artwork that pops and accompanies a fantastic story full of intrigue. The text on the card is also very clear and legible, which can be overlooked in card games. If there is a question over something specific, Fantasy Flight’s reference guide comes in handy, answering many questions that can come up during play. A downside I encountered to this game is that unless you are willing to purchase two copies. Lacking the ability to play any combination of investigators you want is a discouragement for me. In addition, one copy only allows you to play with one to two players where two copies allows for play with up to four.  However if you are willing to look past purchasing two copies, a rich and engaging story with some replayability lies in wait for you.