Not exactly a busy fortnight in terms of comics, but that’s always the case around the end of the month. Nevertheless, a cracking issue of Wonder Woman has hit the stands again and Hal Jordan has managed to slightly redeem itself. 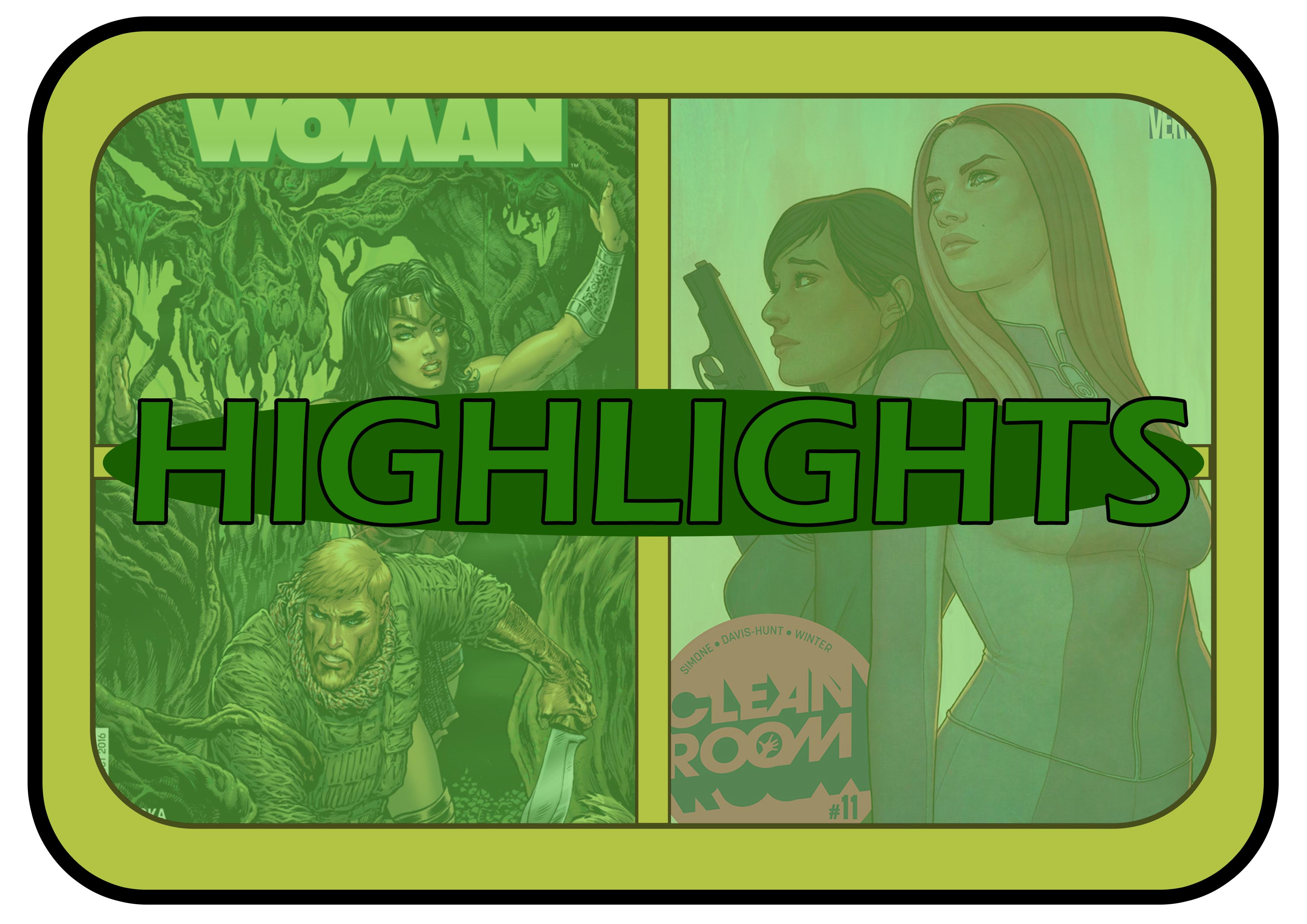 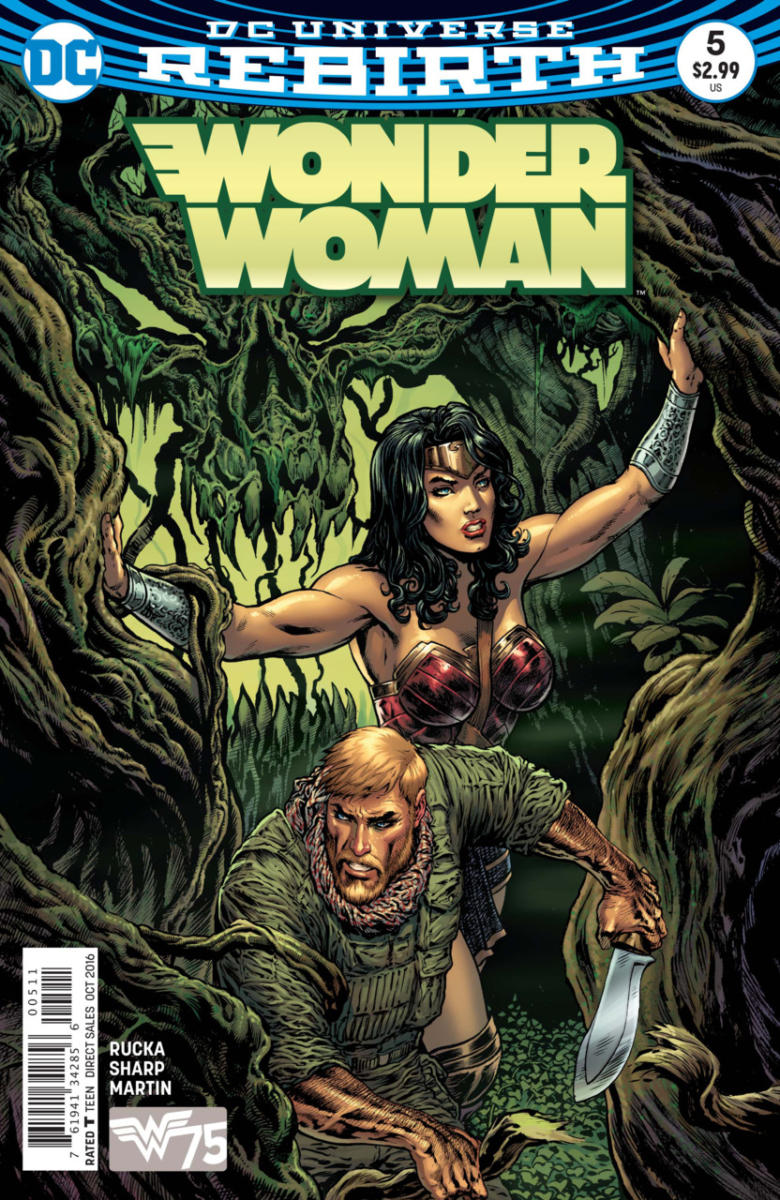 Greg Rucka has made a truly excellent decision in deciding to tell two separate stories with Wonder Woman. This week we’re getting ‘The Lies- Part Three’ as Wonder Woman attempts to discover who or what exactly has obfuscated details about her past. Concurrent to that is Steve Trevor stumbling upon an attempt to resurrect an ancient god in the very same jungle that Wonder Woman is exploring. Coincidence that.

The story thus far has been the high quality stuff we’ve come to expect from the series, and issue 5 is no exception. A little more detail and foreshadowing is given at the very start of the issue with a brief return to America, and it is nice to have the stories pace changed up a little and, even for just a moment, anchor itself in the real world. Full respect to Wonder Woman of course, but she’s not really the hero in this issue. Instead it’s my boy Steve Trevor who does a stand-up job of just being the emotionally mature, All-American solidery bad-ass that he is. Rucka presents a well thought out, if incredibly unsubtle dialogue between Steve and Cadulo around the idea of modern masculinity. It’s hardly mind-bending, earth-shaking stuff, but it does provide a good base for Steve and really advances his character beyond the typical gun wielding solider. 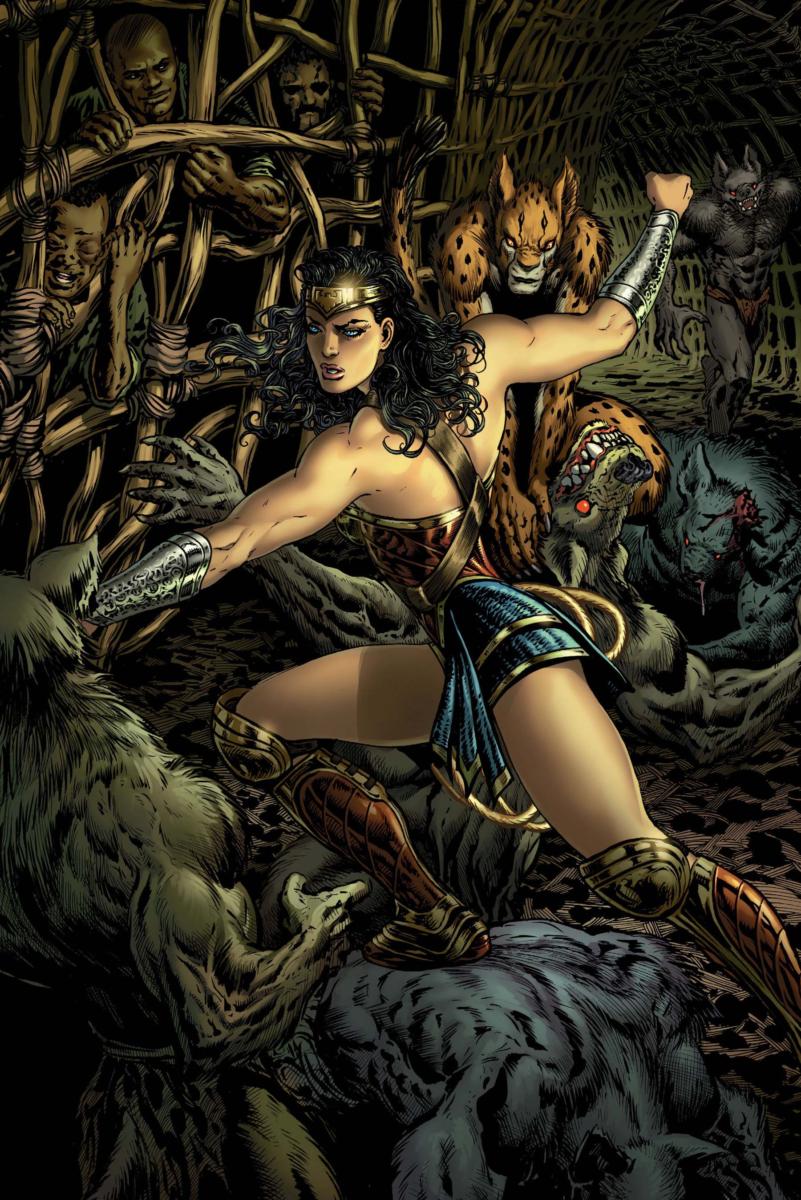 Mention also has to go to Liam Sharp’s simply incredibly fantastic artwork. There just seems to be such a high level of care and skill in it that looking at it is an actual pleasure. There is a certain, twisted, mystical quality to it that really suits the story and also completely sets itself apart from ‘Wonder Woman- Year One’. Perhaps a case could be made to say that ‘Year One’ is a stronger story, but really, with both being so bloody good, it just doesn’t matter. 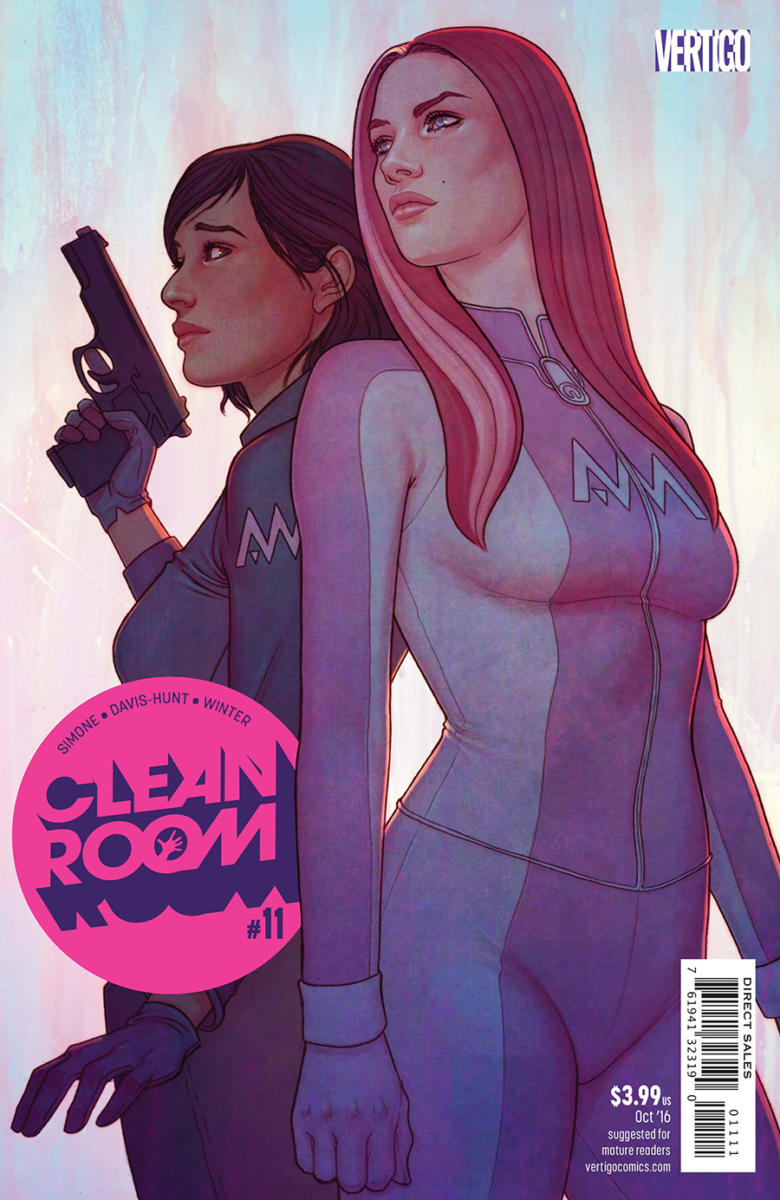 There isn’t much I can say about Gail Simone’s sci-fi/horror that, despite 11 issues, still manages to make me uncomfortable while also drawing me into the story. Rest assured this latest outing is just as good as what’s come before, if not better. The story is especially tight this month with a lot of Clean Room’s normal careful pace dropped in favor of an issue that springs from point to point. This is in no way a criticism with Astrid’s retreat, Sparks fate, Duncan’s betrayal and the coup of Astrid’s company by a charlatanistic evangelical organization all rearing their narrative heads.

The issue, and story, needs a bit of pep and vigor and this one delivers. There hasn’t been a large amount of traditional action (y’know, guns and punching) in Clean Room thus far, but issue 11 doles out just the right amount. There is of course a healthy dollop of political intrigue to round the whole thing out, and I gained a certain amount of satisfaction from seeing John Davis-Hunt finally draw Astrid’s eyebrows in a furious, plotting scowl once more. What keeps me coming back to Clean Room time and time again is the complexity of… whatever it is that Gail Simone has created here. It’s almost as if Simone is telling two stories, one is one what’s happening in real time, and the other is the slow discovery of how things really work. Her drip feeding of that second story is incredibly masterful and is on full display this month. Any kind of comic-reading fan of sci-fi or just odder than usual stories simply has to jump on the Clean Room ride. 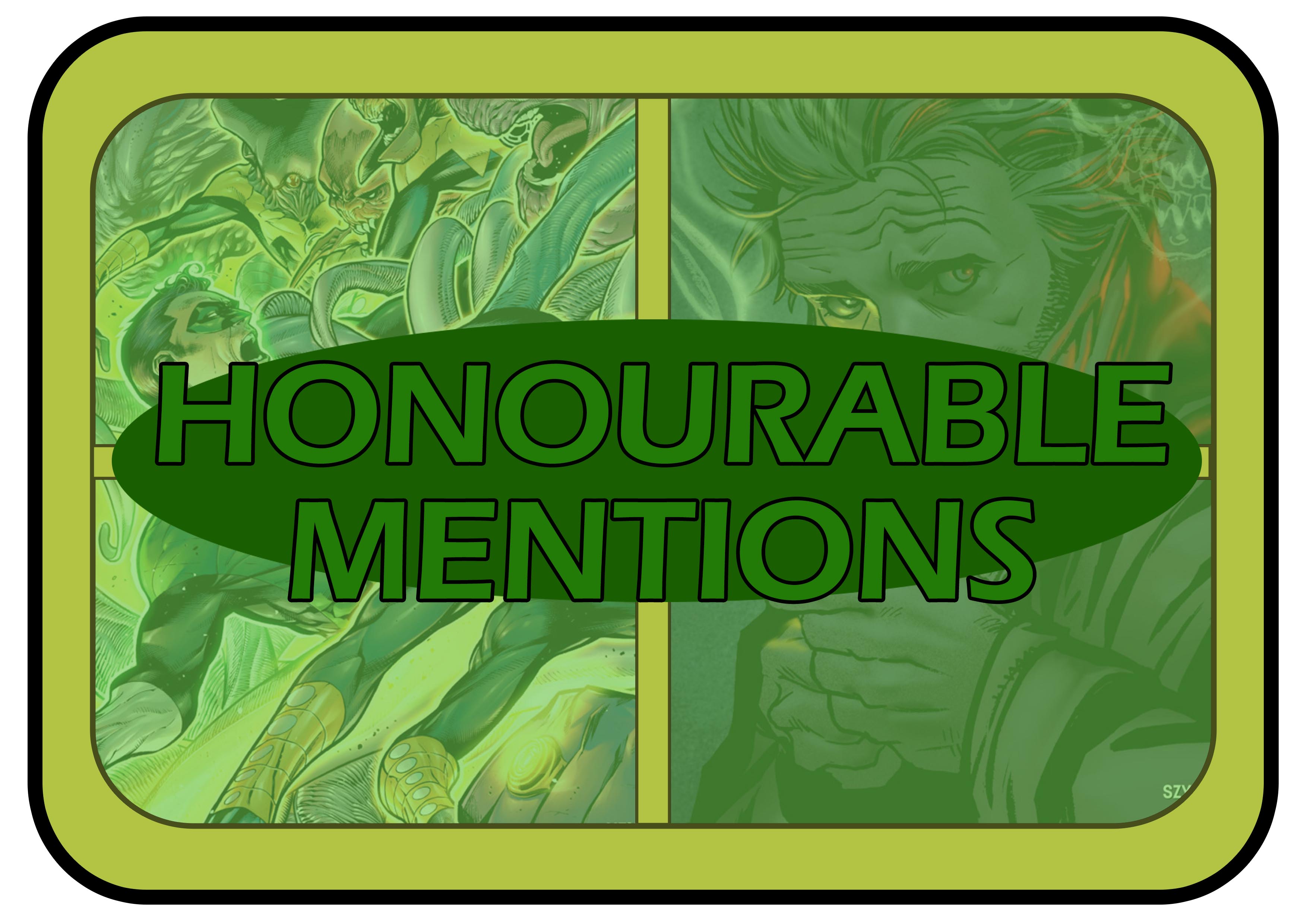 Hal Jordan and the Green Lantern Corps from Robert Venditti has finally dragged itself up after a couple of lackluster first issues. Issue 3 is really more of a step in the right direction with a good dose of sci-fi action, some cool aliens and the beginnings of a fairly interesting story. Is it ground-breaking stuff? Not in the slightest, but I’m not really expecting it to be. I’m finally enjoying Venditti’s Hal Jordan who seems to have thankfully progressed from a petulant weirdo into the determined, will-power filled hero we all know and love. A series to watch, if a little cautiously.

Also on the radar this week is The Hellblazer #1 that just hit the shelves. Unfortunately, my local shop was fresh out so I had to content myself with The Hellblazer: Rebirth. Which was hardly a sad affair with a fairly cracking, amusing fantasy story tucked away inside. My experience with Hellblazer and John Constantine is general is fairly limited but the story of a cockney-ish sorcerer defeating a demon in London while cracking a bunch of jokes is a good one. Constantine is, at times, genuinely funny and the dark fantasy vibe is unlike anything else I read. Not quite solid enough on the writing front to hook me in, but enough to keep an eye out for the trade.

That’s it from me this time, what are you reading this week? Leave a comment or hit me up on twitter!