Welcome to the first (and hopefully not last) installment of Geekly Grooves! Geekly Grooves is a way for the community to share their favorite artists and albums with each other. Every couple weeks we will be pulling album recommendations from you via Twitter or the Forums. A few of us will dedicate some time to listen to an album and we will report back here to you with a short overview and our personal thoughts on it! It’s just another nifty way to connect with your fellow Geeklies over a mutual love of music!
The following is just a small taste of what you guys can expect to find here. If you enjoy the article then please feel free to send us your album recommendations and of course some feedback in the comments or Forums! Thank you! 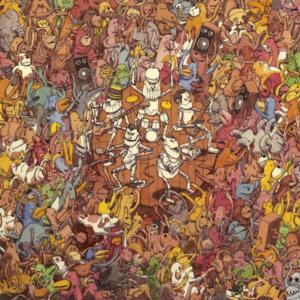 This week we have the album Tree City Sessions from Sacramento based band, Dance Gavin Dance. Recommend to us by fellow Geekly @ryanSCBsantos on Twitter, this album is a sonic force to be reckoned with! The album is a live compilation album including songs from each of the band’s earlier works sung by current vocalists Tilian Pearson and Jon Mess.

The album kicks off with “Alex English”, a song off the band’s original self titled album. Pearson manages to make this and other earlier songs his own with his high pitched falsettos mixing very cleanly with Mess’ screamed vocals. Guitarist, Will Swan, shines throughout the album with his furious fretwork and still manages to fit some of his own vocals on a rap sung verse on the song “Spooks”. This album and more by Dance Gavin Dance can be found on Spotify and iTunes.

Personal Thoughts: Buckle in for this one Geeklies! You’re in for quite a ride! Stand out songs include Lemon Meringue Tie, We Own The Night, and Carl Barker.