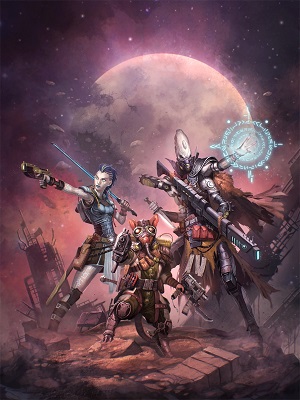 Paizo has been a titan in the tabletop gaming world and is constantly bringing new content and features to keep things exciting and fresh. This year at GenCon was no different where they presented to the public their newest release: Starfinder. Starfinder brings in a lot of the mechanics player lover of Pathfinder and introduces new races, classes, and lore for their budding space adventures. I had the opportunity to speak with Rob McCreary, Paizo’s Starfinder Creative Lead, a little more on already hit new Paizo world. This is part one of a two part interview article.

Nika: What sparked the idea of putting the Pathfinder world in space?
Rob: We have a lot of overlap between science fiction and fantasy in many ways and we had already published the planets in the solar system around Pathfinder. So we already had a pseudo-place to go for fantasy so the natural thing was so move into that setting with a new game.

Nika: Starting with the core book what do players find there? For Pathfinder you have the core races, classes, and basic rules that give the introduction. So what is the “starter pack” so to speak for Starfinder?
Rob: So the core rulebook is the main thing you need and it has races, classes, equipment, starships, and rules for starships. It’s got all the setting information as well; so this is for our core setting of the world. There is also a small section at the end called “Pathfinder Legacy” that has tips and tricks for converting things over into Starfinder. You can use elves, dwarves, etc. and there are new core races; but we do have rules for all the classic Pathfinder races. Also with the release we have the first part of a six part campaign adventure path named “Dead Sons”. You can start right off the bat and work your way throughout the entire campaign over a year.

Nika: Players who are familiar with Pathfinder and those rules; are those rules similar to Starfinder or would you say that there are new mechanics players will need to learn?
Rob: They are similar rules, but also there are new features like building starships, etc. But we also wanted to simplify the rules a little bit, so there are lots of little changes from Pathfinder to Starfinder. But most of the basics are the same, just a few things that will change like the number of attacks. In Pathfinder, the higher level you go the more attacks you get. For Starfinder everyone will just get one or two attacks to start off.

Nika:  For that mechanic would you say there was something that prompted that change?
Rob: There is at high level play, combats can take a while when you have 6,7,8 attacks. So one way to streamline that is to let the player have more attacks at first level. Another change is that Pathfinder is more melee focus, but for Starfinder we have laser guns so there will be more ranged attacks.

Nika:  How does magic fit into the Starfinder world?
Rob: We have two core classes that are spellcasters, but they cap at 6th level spells. So for Pathfinder spellcasters go to 9th level spells, but this is only going to 6th level. There is a lot of technology that replaces what magic can do. Another thing that we did was that now there is no difference between divine and arcane magic. So it becomes up to the DM and player to decide how that character gets their magic, if it is from a god or another way.

So that is part one of my interview with Rob McCreary from Paizo’s Starfinder team. Part Two will release soon, so keep an eye out for that. In the meantime, make sure to check out Starfinder available now and get your group ready for the newest intergalactic adventures out there!