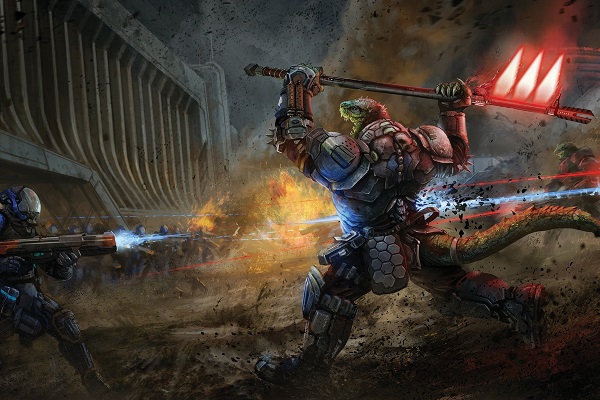 Paizo has been a titan in the tabletop gaming world and is constantly bringing new content and features to keep things exciting and fresh. This year at GenCon was no different where they presented to the public their newest release: Starfinder. Starfinder brings in a lot of the mechanics player lover of Pathfinder and introduces new races, classes, and lore for their budding space adventures. I had the opportunity to speak with Rob McCreary, Paizo’s Starfinder Creative Lead, a little more on already hit new Paizo world. This is part two of a two part interview article.

Nika: Some people tend to shy away from Pathfinder because it is considered to be “rules heavy”, do you think that with the streamlined rules that Starfinder is less complex and becomes more a story driven game and not necessarily all about mechanics?
Rob: It was hard to find the balance since it was built on Pathfinder, so there is still that complexity. But we did try to ease it in during the beginning of play to make it easier for new players. We focused more on character generation in the beginning and each of the classes have sample builds to show players how they work. And some of the other small changes we have made will make it easier for new players while still having robust rules for those players.

Nika: So have you had the time to play through a campaign yet, or once con season dies down what is the next plan for Starfinder?
Rob: I haven’t actually had time to start an full game yet, but there has been play testing done. We’re already working on a few things that are going to be announced at the show; but we already have a release in October called  “Alien Archive”. That will be a book of aliens and monsters and will have rules for creating new monsters and NPCs. Our adventure path has a new volume coming out every other month and then I think we will doing some new books every few months.

Nika: There is Pathfinder Society and Kingmaker, is Starfinder going to have similar adventures?
Rob: We are premiering the same for Starfinder at the show. So that will be another way to get new adventure paths.

Nika: Can you give us a little bit of information about one of the new classes/races? Maybe something to just tease players?
Rob: Well of course we have humans in the core. Some of the newer ones are the “Shirrens” which are an insect-type people that are part of the “Swarm” and were super dangerous but they got free will and choice and now are addicted to choice since they never had that before. We also have the “Vesk”, which are the big strong war-like lizard race and used to be enemies of the pack in the core setting, but when the Swarm came they banded together. Then we have a few other races that came out in Pathfinder. A few of the classes we have a technomancer who blends technology and magic together. The operative who is more specialization, like a thief or a spy-kind of a master of all trades. We have the envoy who is similar to a space bard and can shout out encouragement to allies and take away things from enemies. The one we are really excited about are the Solarans who have powers based on stars and blackholes and can create a suit of energy armor or energy blade and can throw people around with gravity powers.

Nika: Syrinscape has partnered with Pathfinder in the past on adventure paths, are you working with them for music sets with Starfinder?
Rob: They have already created some music sets for Starfinder, they have starship sounds and they are going to be doing a lot more. I don’t think they are out yet, but yeah they are working on stuff to go with that as well.

Nika: For people who have questions, would you say the core book will answer most of those or is there another place players can go?
Rob: We do have message boards that have rules questions and people are already posting things on there. We will also be doing some FAQs on there, but the message boards are a great place to go because the fans are on there.

So that is the second half of my interview with Rob McCreary from Paizo’s Starfinder team. Make sure to check out Starfinder available now and get your group ready for the newest intergalactic adventures out there!