At GenCon 2016 I attended Pelgrane Press’s annual “State of the Pelgrane” panel and afterwards had the opportunity to talk to Co-Owner and Managing Director Cat Tobin about Pelgrane, Dracula, psychic velociraptors, women in storytelling games, and what’s new for them this year.  This is part two of a two part interview.

GI: A lot of your games are based less on dice rolling and combat mechanics and more on storytelling, like with Timewatch and the Dracula Dossier. What made you focus on that aspect of it rather than somebody sitting behind a GM screen and saying “You step into a cave”?

CT: One of the design goals that we have especially with our GUMSHOE games is that they’re player facing. It’s all about empowering the player to just keep the game running. And in some traditional games there’s a big power imbalance between the GM and the players, and it’s almost like they’re working against each other. Whereas in GUMSHOE the GM is your friend, the GM is the one supporting the players to create a great story. And the way they do that is that in GUMSHOE you have investigative abilities and the GM will have an investigation matrix so they will know what all the players have in terms of skill. So they will be able to say things like “Okay so you walk into this room and you notice,” cause they know your character is an architect, “That this ledge is overhanging and it’s unstable and something has dislodged that, it’s a trap.” So the GM is there feeding you information to keep the story running so it’s all about the players really. The key being that GUMSHOE is an investigative sort of system and as part of that you have to have a supportive GM otherwise it’s not going to work out. If you had a setup where the GM had all the power in that situation your mystery is not going to get very far.

It’s crazy intense and it’s very intimate as well, because it’s really a very focused conversation between the GM and the player. So it works really well on virtual tabletops, we’ve tried playing it over Skype and over Roll20 and it works really well in those settings. 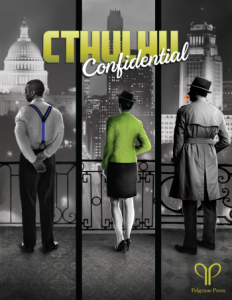 GI: On that note, you guys have GUMSHOE and you have the new GUMSHOE One-2-One, it seems like a pretty interesting concept what can you tell our readers?

CT: GUMSHOE One-2-One came out of a conversation that I had at a convention where a couple came up to me and said “We’re really interested in playing Trail of Cthulhu, but we can’t get a group together, which of your adventures would you recommend for just the two of us?” and I was kind of looking at our stuff and I thought, gosh they’re all really designed around a group. You could tell people how they could hack some of it but there’s nothing really for two people. And I thought about it more, and I thought there are probably a lot of sets of two people in the world. I suggested that we could have a look at tweaking GUMSHOE for one player, one GM which is where GUMSHOE One-2-One has come from. As we mentioned in the seminar, it’s a crazy different playing experience because you don’t realize how much the other players are putting into the game until they’re taken away.

CT: It’s crazy intense and it’s very intimate as well, because it’s really a very focused conversation between the GM and the player. So it works really well on virtual tabletops, we’ve tried playing it over Skype and over Roll20 and it works really well in those settings. One of you is always talking, and you have to write a lot of adventure because with one player you actually get through a lot of material. I don’t know what your gaming group is like, but in mine there is a lot of cross table chat, and that’s a big part of it. But it also fills out the time a lot more, in a three hour session you might get an hour and a half of play. But in a session of One-2-One it’s three hours (of play) and the GM needs to prepare a lot more and have a lot more ready. 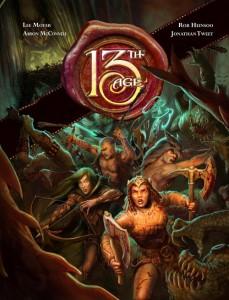 There’s a whole community there of women designers who support each other, and we have nothing like that in the UK. So that was kind of a side goal of doing that was to create that kind of support network for women and non males who are designing in the UK

GI: Well that’s pretty much the main overview of what I’ve got. Do you have anything else you’d like people to know about?

CT: Oh I should say something about Seven Wonders. I found When the Dark is Gone (a storytelling game about a group of children who visit a magical world together and return to the real world to find nobody believes them), and I really really fell in love with it and I got in touch with the author and told her, “I really love this, what are you doing with it?” and she said “I don’t know, I’m not really doing anything with it. What would I do with it?” and I said “Have you thought about publishing it?” and she was like “No.” And I asked, “Could I maybe publish it?” and then I thought if I was going to publish it how would I go about that? Because it’s one story game and it doesn’t really work with the rest of our stuff. And then I thought, well I could go out and try to find more of the same kind of writers and get them to write games as well. So I approached some people that I knew in the UK and got some people as well who kind of came to me and said, “Hey I heard you have this project?” We ended up with seven story games from first time writers. It’s one of those funny things as well because I never know if I should mention this, a big part of it for us is that none of the writers identify as male. And it’s something we don’t really talk about, it’s just first time writers, based in the UK, and none of them identify as male.

CT: Right it’s significant but it’s not a selling point. We’re not trying to capitalize on it . It just kind of happens, if you flick through the names you might notice. But it’s for me a very significant thing as well because I think particularly in the US you have a lot of women designers, particularly in the story game space, who are really creating opportunities and have a support network in place. There’s a whole community there of women designers who support each other, and we have nothing like that in the UK. So that was kind of a side goal of doing that was to create that kind of support network for women and non males who are designing in the UK and give them that sort of community to support them. So that’s a whole kind of project of mine and it’s great to see it doing so well.

GI: Okay, got any other hot tips for us?

Other upcoming and current titles from Pelgrane Press include:

Cthulhu City, a setting for Trail of Cthulhu where the investigators are underground renegades in a city corrupted by evil gods.

The Fall of Delta Green, a GUMSHOE adventure set in 1960s America and themed around the bizarre government experiments of the time (think MK-ULTRA)