So it is understandable to think that Annapurna Interactive’s sweet spot is in the “games you sob while playing” space. And while identifying properties that push the boundaries how gaming can make you feel is certainly a strength, they can also bring us something whimsical.

Donut County is that whimsical thing. In it, you play as a mysterious hole that grows as it swallows ever-larger chunks of the environment. It’s in the same vein of physics-based adventure game Katamari Damacy, only Donut County is, dare I say, even more irreverent. And that’s saying something considering the plot of Katamari is that you need to roll up giant balls of detritus to replace the stars that your father, the King of All Cosmos accidentally destroyed. In Donut County, the hole y 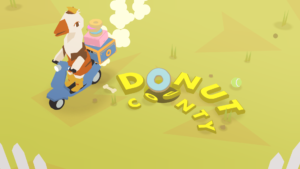 ou control as the player was brought into existence by the owner of a donut shop, who also happens to be a raccoon.

Though the plot is certainly on the far side of goofy, the underlying mechanics of the game are addictive and satisfying. You drag a hole along the ground, swallowing ever-larger objects, which makes the hole larger, hungrier and able to consume more. Swallowing certain things add new mechanics to the game. For instance, swallowing an errant campfire allows the hole to belch smoke, which is proves valuable, at one point, for getting a hot air balloon off the ground.

The game is not necessarily difficult, but you will find yourself scanning the busy landscapes from time to time trying to find the next thing to consume. And you may need to get creative in swallowing larger and more unwieldy things;

you’ll be exercising the same part of your brain that you would if you were helping a friend maneuver a couch down a flight of stairs.

Overall, Donut County is a game to enjoy for, ideally, fifteen or twenty minutes at a time. I liken it to Monument Valley, in that it’s not punishingly difficult and has an immersive enough mechanic that shines in finite doses. Mercifully, it’ll be released for iOS, where it will do the most good, later this year.