One of the most unexpectedly enjoyable elements of Legend of Zelda: Breath of the Wild is the cooking system. Link, during his journeys through Hyrule, can collect all manner of ingredients that he can combine over a cookfire. The results are innumerable meals and potions that can restore health, restore stamina or grant all sorts of bonuses. And, just as importantly, look and sound delicious. Salt-grilled meat. Spicy simmered fruit. Hearty mushroom skewers. I often remember meals I cooked in Breath of the Wild with practice ally the same fondness of meals I cooked in real life. Such is the nature of my enjoyment of a great hunt-and-cook-and-triumph game mechanic.

Battle Chef Brigade, developed by Trinket Studios and published by Adult Swim Games, takes that “hunt for ingredients and cook something delicious” element, puts it on a pedestal and builds a whole world around i

t. You play a contestant in a cooking tournament who must battle the creatures of the game’s fantasy world for ingredients and cook those ingredients expertly enough to impress the discerning judges. Success requires skill in the side-scrolling hunting element of the game and the puzzle-based cooking element of the game. In a cooking battle, you will find yourself sprinting out of the kitchen and into the woods with weapons in hand to restock your pantry as your hearty beef stew simmers on the stovetop because you know a judge is looking for a tour de force of flavor.

For a game like this, with such a specific aesthetic (Pokémon-esque world of friendly strangers who want 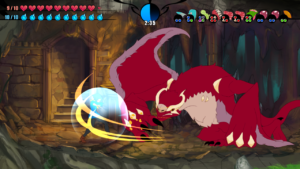 to do battle), the tactical nuts and bolts of the game need to be spot on in order to match the clear level of care put into the world. Thankfully, Battle Chef Brigade succeeds there. You will be just as compelled by the tactics of switching your still-cooking dishes between multiple pots to maximize bonuses as you will by the surprisingly deep and well-developed characters. Whether you’re playing as a plucky rogue or an orcish father or two, you’ll enjoy your character and what you do as them.

The end result of a fun world being combined with fun mechanics is a Great British Bake Off in a land of magic and monsters. Every part of the game feeds into that and nothing feels like a chore.

Battle Chef Brigade will be out by the end of the year on multiple platforms. It’s been a while since I’ve waited that long for a good meal.