The Penny Arcade Expo is, by design, a grind. Noise and sound and free things and kids and adults and cosplay and super-bad-for-you food. After two days, you feel it in your legs. After three days, your back. After four days, your soul. But if you wait in just the right lines and chug just the right energy drinks, you can get an incredible look at the state of gaming.

PAX West showed its attendees that the state of gaming in the fall of 2017 is strong. Teams from Bethesda, Microsoft, and Capcom showed off impressive AAA titles, but some of the brightest gems in Seattle were from smaller developers. We see the true strength of the industry  in the games built by agile, independent studios. They can draw on decades of video game norms and tropes and flip them on their head for sake of entertainment.

With that in mind, here are my game standouts from the smaller booths of PAX West 2017: 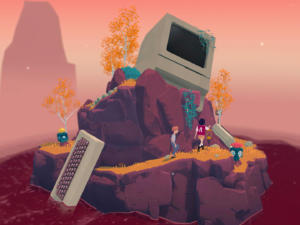 The Gardens Between – The main characters in this puzzle are a pair of friends, but you don’t play as those friends. You play as time, moving forward or backwards as these two friends slowly climb to the summit of a series of heavily stylized islands. The only mechanics you are in charge of as a player is time, and occasionally interacting with an object so that something is different when time changes direction. After only a couple of levels, you will be absorbed by the art style and the fact that The Voxel Agents have somehow stuffed a parable about childhood and friendship into and game with literally three buttons.

Masquerada – Witching Hour Studios’s pause-for-tactics RPG has been out on Steam for a year and PS4 and Xbox for a month. But it’s going to soar when it is eventually released for the Switch. The hand-drawn style and lovingly crafted setting (think Renaissance Venice, only with even more intrigue) will add a much needed role-playing title to the system. The voice acting is top notch and the plot reveals itself as much through deftly written dialogue as the set-piece combat system.

Trailmakers – You begin in a canyon on a distant world and build, crash and rebuilt crazy vehicles meant to get you as far from that canyon as possible. Essentially, you play with Legos and have 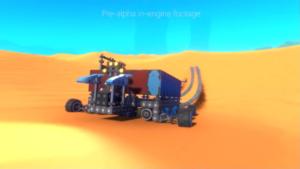 to contend with the effect of physics on your Lego creations as it crosses mountains, rivers, chasms and endless plains. The construction system is intuitive point-and-click, which means that the  real challenges in the game come from design, steering and piloting. That you can cut apart and rebuild your vehicle countless times to suit the various needs of the terrain means that you are constantly toying with weight distribution, or switching out wheels for wings, or decided where to bolt on a fourth jet engine. It is one of those rare games where it is just as satisfying to fail as to succeed.

DropMix – A joint venture by Harmonix and Hasbro, DropMix may well be one of the most unique games you’ll see all year. It is, in essence, Music Mashup The Game. You start with a game board that has five spots for cards, connect that to an iOS or Android device and then start placing cards on the board. The cards possess/contain/have-trapped-the-soul-of the guitar, vocal, drum or bass tracks from hundreds of songs and playing them in the various spots create effortless and mind blowing mashups. You can increase or decrease the beats per minute or just let the cards do their things naturally. There is a freestyle mode in which you can spend hours exploring billions (probably billions) of combinations of tracks, as well as a party and competitive mode. As is often the case with Harmonix games, it needs to be seen to be believed. So please do yourself a favor and see it. It will totally suck you in.

Monster Prom – Weird art, a healthy dose of profane language and high school politics blend together to create Beautiful Glitch’s Monster Prom. It’s a competitive dating simulation that takes place in a world of teenage monsters jockeying for position and popularity. The player picks a monster, 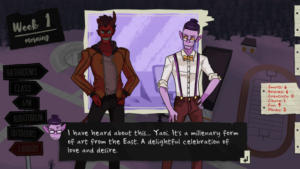 answers questions and navigates social situations in order to eventually score some bigreputation at the prom. There’s nothing revolutionary about the dialogue-based interface, but the game is oddly addictive due to the smart writing and fun art.