At GenCon 2016 I attended Pelgrane Press’s annual “State of the Pelgrane” panel and afterwards had the opportunity to talk to Co-Owner and Managing Director Cat Tobin about Pelgrane, Dracula, psychic velociraptors, women in storytelling games, and what’s new for them this year.  This is part one of a two part interview.

GI: Do you want to quickly tell us about Pelgrane Press and introduce yourself?

GI: Great, so what have you guys been doing and showing here at GenCon this year?

CT: What we’ve got here at GenCon is the deliverables for two really big Kickstarters. So the first one of those is the Dracula Dossier, which I worked quite closely with Kenneth Hite and Gareth Ryder-Hanrahan on, and basically that takes the premise that the original novel of Dracula is real. Dracula the novel is a redacted version of what happened which MI6 redacted and released as misinformation because they tried to recruit Dracula as a spy to work for them. We’ve got Dracula Unredacted which is the novel but we’ve added back in the redacted characters so we’ve got some extra characters in it. And we’ve added about 25% that MI6 took out. That book has also been annotated by three generations of MI6 analysts, so they’ve got through it in their attempts to track down Dracula and potentially hire him again; they’ve gone through it and they’ve made annotations in the margins of the book.  This is the ultimate player handout, you hand them this unredacted version of the Dracula novel and say “Where do you want to go?”

And you can play any kind of character, there’s a psychic Velociraptor, an uplifted ape, you can play people from the very, very far future. There’s epic scope to design your kind of agent.

You find this artifact, open it up, pick a clue and investigate that. And we’ve got another book which is the Director’s Handbook which gives you all of the information you need about the clues you will find in Dracula Unredacted. It’s an epic sandbox campaign and they’re the kind of two core books in it. 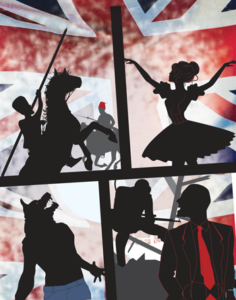 Also relatively new at the show, we’ve got the Edom Files, which is a collection of adventures for the Dracula Dossier. So if you didn’t want to get into the epic sandbox campaign they’re much easier to just pick up and play. We’ve also got the Edom Field Manual, and that’s the organization within MI6 that is responsible for maintaining and managing the vampire assets, it’s called Edom. So the Edom Field Manual tells you what it’s like to be on the inside of Edom. It’s like an army training manual for Edom and it’s got lots of NPCs. There’s also the Thrill of Dracula, where Kenneth Hite has basically taken all of the Dracula literature and watched all of the films and he basically tells you how to incorporate the wealth of Dracula film and literature out there and bring that into your game. So that’s one of the two Kickstarter related sets of books that we’ve got out.

So this is the ultimate player handout, you hand them this unredacted version of the Dracula novel and say “Where do you want to go?”

The other one is TimeWatch which we’re all very, very excited about. TimeWatch is a GUMSHOE game, so it’s investigative, and you play time agents who are trying to protect the timelines. They investigate anomalies and paradoxes in the timeline, across all timelines.

And you can play any kind of character, there’s a psychic Velociraptor, an uplifted ape, you can play people from the very, very far future. There’s epic scope to design your kind of agent. 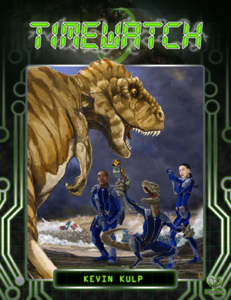 We’ve also got Behind Enemy Times, which is again an adventure collection for that so it just teaches you a bit of how to design your own adventures for TimeWatch. And we’ve also got the Book of Changing Years which is effectively a Wikipedia of the timeline so it kind of takes lots of different events along the timeline and fills them out a bit. And each of those events is a plot hook that you can use to create adventures.

Also new at the show,  we’ve got Fear Itself Second Edition which I’m really excited about. We’re taking and revamping Fear Itself which is a GUMSHOE game of interpersonal horror. So you know kind of slasher movies, somebody’s in the house, nobody knows anything about the supernatural and suddenly these things start attacking them, weird things start happening and they have to try and figure out what’s going on. So that’s the kind of premise of Fear Itself and the second edition basically takes that setting and the core rules and adds a load of GM advice to it.

But where in Fear Itself you play an ordinary person that has no experience with the supernatural, in The Esoterrorists you play an agent from what’s called the Ordo Veritatis and you know about all the weird stuff.

There are different ways you can run it, you can run it as a one shot, or as a miniseries or as a campaign, and there’s an example of each of those in the book. The important thing it does is it teaches you how to structure plots for each of those, how to design characters that are impacted by the length of time that you’re running.

Like obviously if you’re running a one shot you need them to be a lot more focused in terms of the horror they’re experiencing whereas over a campaign you have more time to play around with the pacing of it. We’ve got great feedback so far about the GM advice in Fear Itself Second Edition and how it can be used to run any horror game. 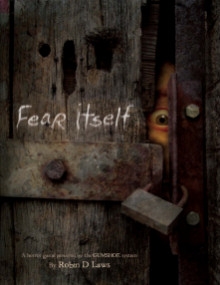 The last book we have is new at the show and is called Worldbreaker and that’s a globe spanning campaign for our very first GUMSHOE book which is called The Esoterrorists. The Esoterrorists and Fear Itself are both set in the same universe. But where in Fear Itself you play an ordinary person that has no experience with the supernatural, in The Esoterrorists you play an agent from what’s called the Ordo Veritatis and you know about all the weird stuff. They’re the super competent agents who burst through the door when the Fear Itself people are going “Oh no, I don’t know what’s going on!”. They’ll take out the monsters and seal what we call “holes in the membrane” which separates our world from the world of the Outer Dark where all the creatures of unremitting horror live and are trying to get through.

Obviously it is amazing to win awards but for us the biggest one was the Fan Favorite Publisher which was really, really special to me because our fans are incredible people.

The eponymous Esoterrorists are almost likes cultists who are working with the creatures of unremitting horror to try and open holes in the membrane. Which they do by feeding into beliefs and taking weird phenomenon and using that to create holes in the membrane. So Worldbreaker has five different locations so you have to travel and resolve almost a standalone adventure in each location and while each stands alone there is an overarching plot where this one group of Esoterrorists are trying to create a massive breach.

GI: You guys have got a lot of stuff! That’s exciting! Last night at the ENnie Awards you guys pretty much cleaned up, what was that like?

CT: Yeah, somebody said to me, which I thought was really funny and I guess is kind of true, is that we were nominated for ten ENnies and we won eleven. Because basically in one of the categories: the 13th Age GM Screen was nominated and we published that but a partner that we worked with for the Dracula Dossier who made the amazing dicebags for it, they were also nominated in the same category.

Obviously it is amazing to win awards but for us the biggest one was the Fan Favourite Publisher which was really, really special to me because our fans are incredible people. You know they’ve come out in numbers to support us and everything we do, we do for them. It was really, really touching to win that.

Also Product of the Year was pretty great.