With the third entry of Brandon Sanderson’s The Stormlight Archives, Oathbringer, releasing today, the arc that comprises the first five books is more than halfway through. The third book takes nearly all the events that have happened previously and reaches the height of storytelling for the series so far.

From the beginning, Oathbringer is ripe with revelations. The prologue starts off with a reveal that not only impacts the rest of this volume but the events of the previous two books. Then, what is revealed to the reader later in the book puts the prologue in an entirely new light if the reader chooses to read it over again. Afterwards, it picks up right where Words of Radiance left off with Dalinar Kholin and company seeking refuge in the ancient city of Urithiru and the establishment of a new order of Knights Radiant. 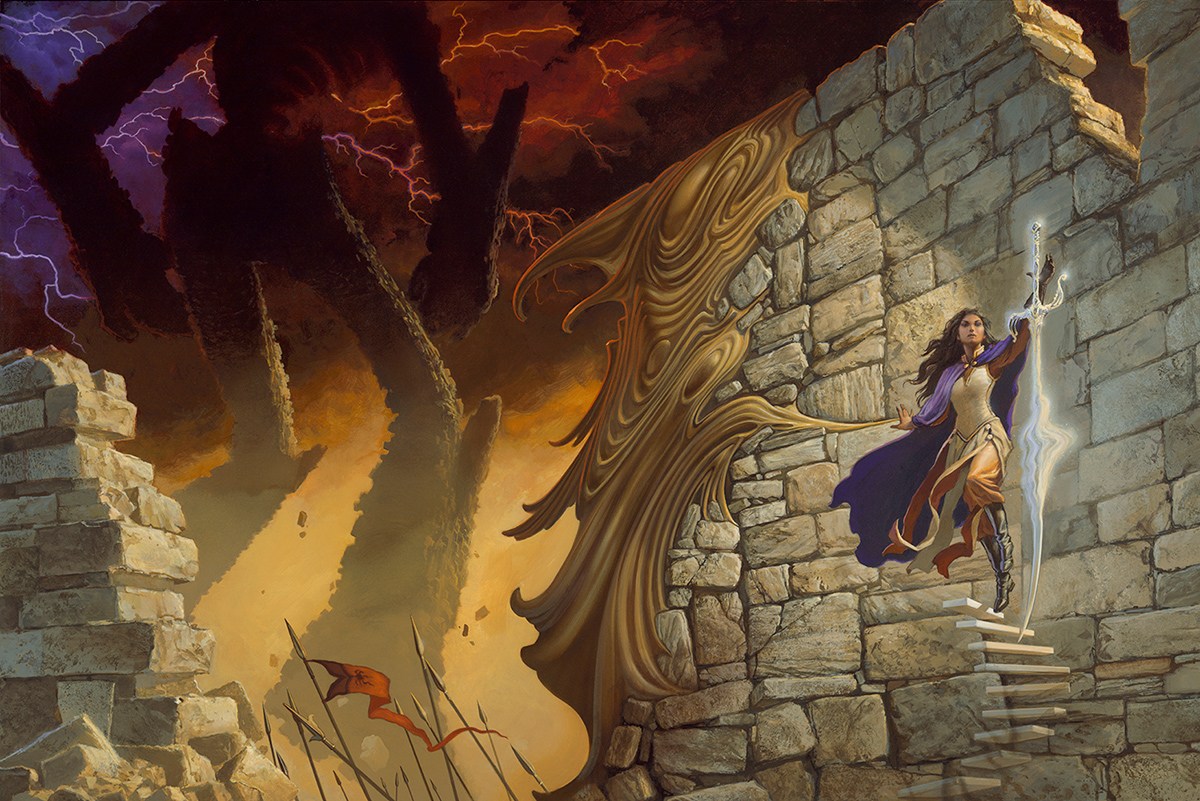 The story does not cease in its momentum after those events. With the Everstorm raging and the return of the Voidbringers, the first third of the novel delves into what immediately happens next. The Desolation has begun again but that change is secondary to the changes in our main characters. Kaladin and Dalinar have embraced their new roles and allowed themselves to be happy with them while Adolin and Shallan are dealing with the aftermath of what they have done. Oathbringer balances the battle against the new Desolation with emotional growth in nearly every major protagonist. Character development is interwoven with the plot so well that one cannot help but admire Sanderson’s craftsmanship between moments of being wholly absorbed in the story. However, like the people of Roshar, the reader cannot fully define what the outward conflict is with the intention of the Voidbringers shrouded in mystery. Therefore, inner conflict tends to take a precedent over it. This is a not a criticism in any way as the heroes must grow before they face the enemy.

In fact, some point-of-view chapters such as Shallan’s are improved by it. With the revelations of her past in the second book, Shallan is left emotionally fragile while her powers are flourishing. How does she resolve the revelations about her past? By avoiding it entirely in an unhealthy way. This runs parallel with a murder mystery that is occurring in Urithiru. To solve it, Shallan uses her abilities to travel in circles she normally would not be accepted but she is also using those same abilities to avoid facing reality. She approaches her training with her Shardblade with the same dissociation. Her ability to create illusions helps her with the goals as a Knights Radiant but is also an enabler for avoiding feeling any negative emotions until it comes to a boiling point. This, combined with Shallan’s witty banter, which Sanderson has approved upon immensely since The Way of Kings, gives her some of the most captivating chapters in Oathbringer.  In contrast, Adolin does not shy away from what he has done nor the aftermath helping him to realize who he really is outside of his father’s shadow. However, as far as consequences go for his actions, there isn’t much until the end of the novel and even then it seems insubstantial.

In contrast, Adolin does not shy away from what he has done nor the aftermath helping him to realize who he really is outside of his father’s shadow. However, as far as consequences go for his actions, there isn’t much until the end of the novel and even then it seems insubstantial. Though it does cause a political upheaval that increases tension in Urithiru, it does take a backseat until the climax. However, Adolin’s role is not lessened because of this. If characters such as Shallan are dealing with inner conflict, the Brightlord is taking direct actions against the outer conflicts of the novel.

Everyone’s favorite Windrunner, the one, and only Kaladin Stormblessed bookends the novel with some of the best resolution to a protagonist’s past in any of Sanderson’s novels. He has not completely let go of that darkness within him nor has he quit being too hard himself if he perceives he has let those he cares about down. However, he is finally allowing himself to be happy with who he is as a person. The emotional journey the reader has taken with Kaladin to becoming a Knights Radiant leaves us smiling and laughing when he allows himself to do the same. Therefore, it is through Kaladin’s eyes that the reader is given revelations about the Desolation that changes the conflict from good versus evil to one of the moral conflict of war. Though he lets go of his past, he does not forget it. Kaladin has matured into adulthood and therefore is given new conflicts that bare a heavy weight on his shoulders. What does it mean to protect those who can’t protect themselves and protect those he hates, as long as it is right?

Because the majority of Kaladin’s arc is in the beginning and the end of the novel, this gives other members of Bridge Four time in the spotlight such as Rock and Teft that converges with Kaldin’s arc in the climax. Even Elhokar Kholin, who up to this point has not been an admirable king, gets his time to shine alongside the Radiant. In such a short time, with a mission and confidence from the young king that hasn’t been seen before, the reader’s perception of Elhokar will shift.

Like Kaladin in The Way of Kings and Shallan in Words of Radiance, Dalinar is given the chapters set in his past before the events of the first book. Originally, Szeth, the man known as the Assassin in White, was the character to be given the backstory treatment in the third book but Sanderson later chose Dalinar instead. This clearly was the correct path to for Oathbringer. His past is integral to his arc in the present. If anyone thought for a moment the political intrigue ended when Dalinar was proven correct about the Desolation, the Voidbringers, and the Knights Radiant then they are sadly mistaken. Finished with trying to unite Alethkar in memory of his fallen brother, he is now tasked with uniting all of Roshar to fight the Voidbringers. His past provides the proof of why this task is so daunting and why the rest of the continent is so reluctant to trust him. Because of this, like Kaladin, when and if Dalinar triumphs the reader triumphs with him.

Oathbringer is impressive in what it accomplishes. Many of the questions left unanswered in the first two books about the past of Roshar are answered and establishes questions about its future. The reveals, both grand scale and personal to the characters, are jaw-dropping and have implications that will presumably affect the next seven novels of this series going forward. Sanderson continues on with the themes of classicism, slavery, and the aftermath of war from a new perspective than previous entries while exploring new ones such as addiction, substance abuse, religious heresy, and privilege. Well known for his magic systems and rules, Oathbringer continues the trend of balancing magic that has explicit rules the reader can understand while still giving the reader a sense of awe and wonder. It is unbelievable after the climaxes of The Way of Kings and Words of Radiance that Sanderson would be able to top those but Oathbringer’s turning point is rewarding to the reader of not only this one part of the series but the series as a whole so far.

After this novel, it’s hard to imagine the next two volumes of this first five volume arc or the next seven books of the whole Stormlight Archives failing to meet expectations. These first three books together stand out as Sanderson’s best work. This is where Sanderson lets loose, where secrets of the Cosmere comes together, where his worldbuilding and character development coexist at their best. With a time skip of a year set for the fourth volume, it’ll be exciting to see where this series will go next.