It starts with a band of Crows, the lowest caste in the highly striated society of Sabor. They’ve been called to deal with plague victims, the duty of their caste, since they alone are immune to the disease. But these victims are no ordinary citizens. The crown prince and his body double are enacting a ruse to escape the palace, and they want the Crows’ to take them to their political allies. 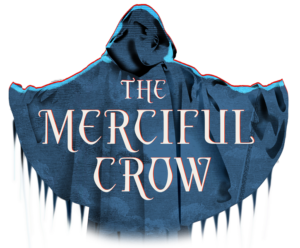 Fie, the chief-in-training for her band, doesn’t like a couple of Phoenix-caste prettyboys coming in and telling them what to do. Everyone may spit on them and try to cheat them, but the Crows still know their worth. She bargains not for payment in coin or luxuries, but for a single oath: the Crows will be recognized for their contributions to society, given fair treatment, and have protection from the increasingly popular Oleander Gentry—a loosely affiliated group of vigilantes who want to wipe out the Crow caste entirely.

The Oleander Gentry ride out at night in white garments that conceal their identities, cowards who are clearly meant to invoke comparisons with the KKK. And from there it’s not hard to see lots of parallels to lots of situations with a privileged class and a class that bears the brunt of that privilege. One of the strongest facets of The Merciful Crow is its thorough examination of privilege and oppression. Owen has clearly thought long and hard about systems of power and about the individuals who are trapped in those systems, for better or worse. It’s viciously, unflinchingly incisive, and it leads to dramatic moments that I know will stay with me for a long time.

It’s good to get a story from the perspective of a lower caste character and feel her fury as the upper-caste characters stumble over their excuses and their ignorance. SFF has been criticized recently for having far too many stories of white characters discovering that aliens (read: PoC) are worthy of respect. Owen doesn’t let any of that feel-good nonsense into her story. Fie is rightly furious that the other castes abuse, cheat, and look down on the Crows, and she won’t let anyone mitigate that anger. From the first to the last, Fie might change and grow, but she never compromises what she knows to be true.

And let’s talk about that “first.” The first chapter has clearly been worked and re-worked until it’s perfect. The dead bodies, the rising tension between the castes, and the “money dance?” (I won’t spoil what that is.) It would make such an incredible first episode of a TV show. The entire book would, actually. All the drama is highly cinematic, so vivid and striking that I can already see the awards for design and sound stacking up. Someone get those movie rights! Netflix? Hulu? Anyone?

I say cinematic, but let me be more specific. There are some authors who have seen too much TV and treat writing like a tedious transcription exercise, the medium an impediment rather than an aide to their imaginations. Owen is not one of them. Fie’s voice is clear and distinct throughout, never subordinate to the action. This is her story, her triumph over classism and caste-ism despite every hardship and cost. She’s a brilliant main character, completely able to carry even the toughest scenes with wit and vigor. She’s also utterly relatable, full of love and anger and want and duty all set to simmer, but ready to bubble over at the slightest flare. 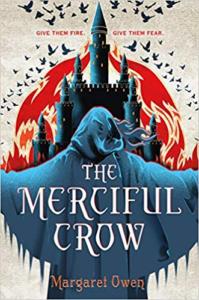 The secondary characters are also perfectly drawn. The villains are heart-stoppingly cruel, making every interaction fraught with believable life-or-death tension. Fie’s allies are sympathetic but flawed, wholly human in their foibles and the way they get cranky when they’re tired, but also in their surprising capacity to learn and develop bonds.

There’s also ubiquitous and unremarkable queerness among the characters, which made me so happy. (This is not in contrast to books that do make queerness central, which I also love. This is in contrast to books that make all the characters automatically straight, even the background ones.) The prince is gay! The (female!) leader of the Hawks has husbands (plural!) and wives (plural!). Random people on the road are queer! And the best part is, we only learn these things because of offhand comments. It’s so normal and commonly accepted that it’s not even worth a discussion. Brava, Margaret Owen!

Brava also for the fascinating and well-developed magic system. It’s well balanced in that it grants different castes different abilities, and witches within those castes even more elaborate and diverse talents, but none are absurdly overpowered. Luck, desire, refuge, and additional domains belong different castes, and witches are able to manipulate those domain-powers to a much higher degree. Fie and other Crow-caste witches are bone witches, able to draw out the powers and occasional memories from other castes’ bones. Vultures and Hawks are skin- and blood-witches, respectively. This makes Vultures trackers, able to mark a person or take something they own and follow them across whole continents, and Hawks able to heal or harm by manipulating a person’s blood. The combination of such visceral, embodied powers contrasts nicely with the abstract caste powers, and makes a compelling and well-balanced magic system. (Take note, Brandon Sanderson fans.)

It’s clear that I can keep finding good things to say about this book, so I’ll stop now before I give everything away. This is a book you won’t want spoiled—its twists and turns are thrilling, and the pacing is perfect, too. You won’t want to put it down, so start getting ready, clear your calendar, set up your beach chair (or A/C), and get ready to enjoy The Merciful Crow.