Yet another transcription has been completed from the recently found GeeklyCon cache. Like the House Marewick and House Puddlefoot installments, evidence of a third house winning a GeeklyCon contest has been unearthed. A 1999 press release from The Society for the Wellbeing of Animals in Anchorage Alaska (SWAAA), shed light on the victorious house, which was called Cinderheart. With the press release we also found a crest, depicting a Cerberus-like three-headed hell beast. See below for transcript and scan of the original document.

Additional research on the cache has been completed, and we can tell you now that there are a total of five distinct GeeklyCon houses. More info is coming on the remaining two houses.

July 19, 1999. The Society for the Wellbeing of Animals in Anchorage Alaska (SWAAA) is pleased to announce the emptying of our shelters this past weekend. A group calling themselves “Geeklies” entered our shelters on July 18 and adopted all available dogs, or as the Geeklies called them, puppers and doggos.

The SWAAA staff were taken aback at this request and a little suspicious. However, our concerns were laid to rest once the Geeklies explained they planned to give each pupper and doggo a home with other Geeklies who were attending GeeklyCon 1999 right here in Anchorage, Alaska. They also spoke of this being a benevolent gesture on the part of House Cinderheart, winner of GeeklyCon 1999. SWAAA staff didn’t understand a word of this but didn’t ask questions lest the Geeklies change their minds about the mass adoption.

SWAAA would like to thank Geeklies and House Cinderheart for emptying our shelters and finding homes for all the doggos and puppers. 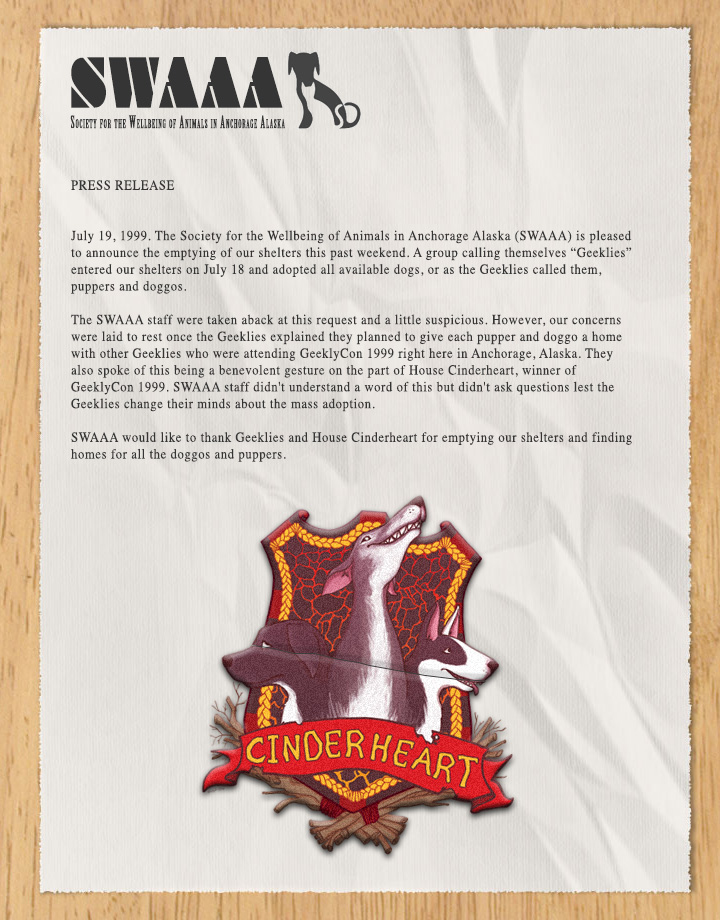