Possibly one of the biggest fortnights in a while, thanks in no small part to Batman’s first big crossover Night of the Monster Men kicking off. Also rearing its misshapen head is another amazing issue of Clean Room, DC’s second Young Animal series Shade the Changing Girl and The Autumnlands finally makes a welcome return. 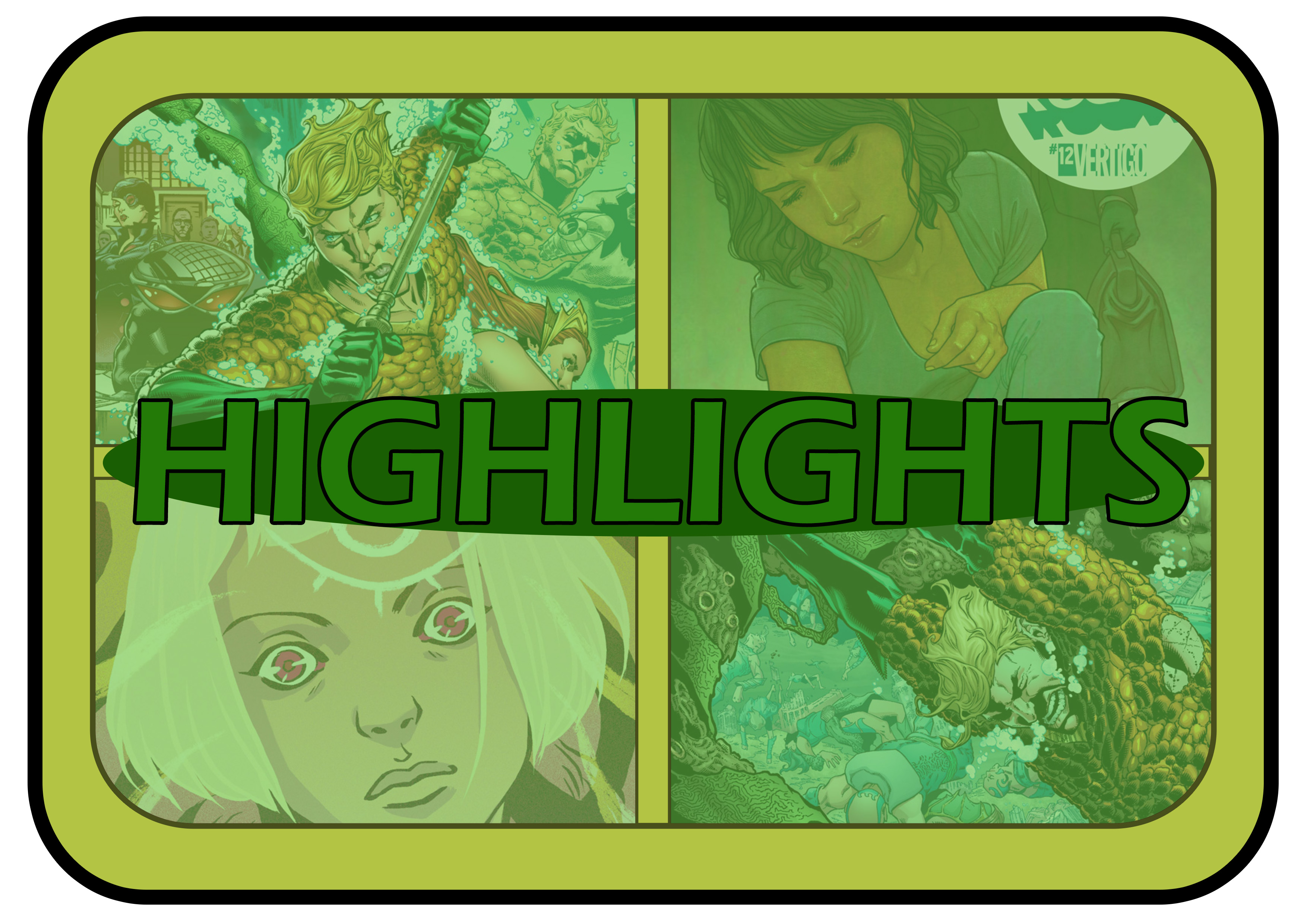 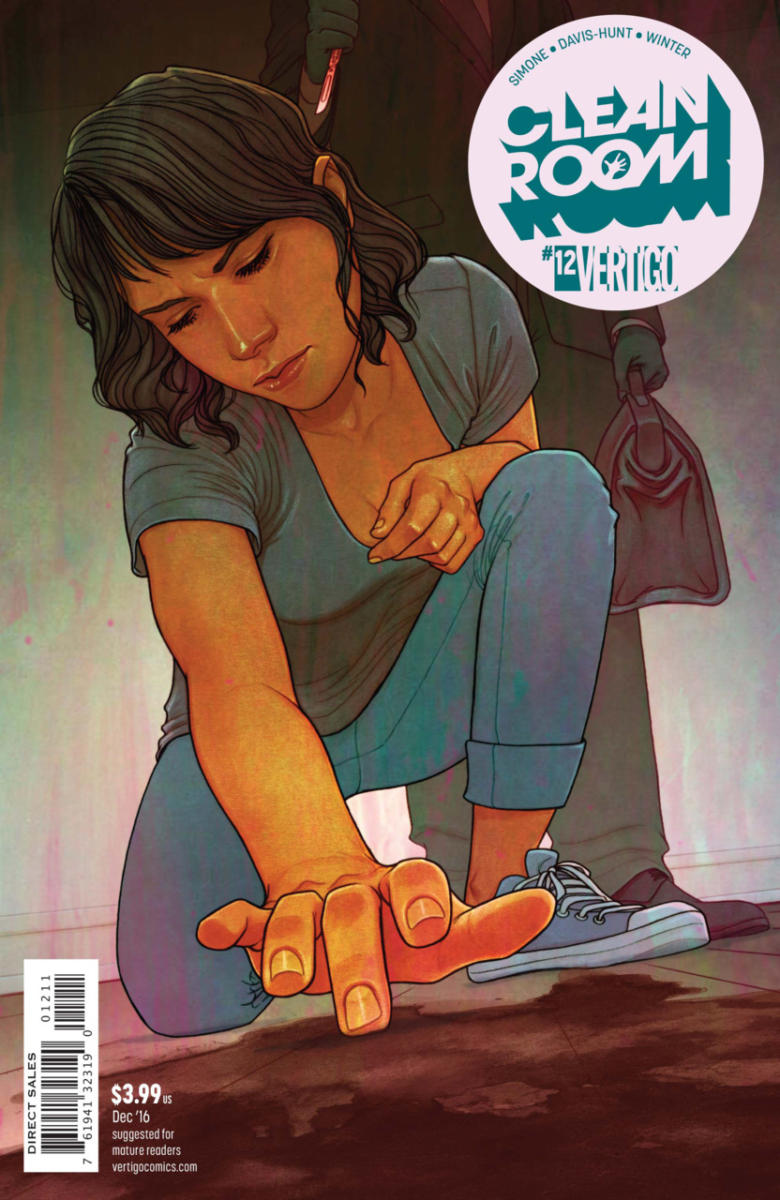 12 issues in and I’m constantly waiting for Clean Room to slow down and start disappointing me, like a high-achieving child that falls by the way-side. It’s more like the child who achieves their masters whilst saving orphans in other countries, constantly achieving, and somehow doing better than ever before. Last month we saw an Astrid Mueller that was on the ropes, barely clinging to her power, and a Spark that was poised to kill half our cast. It looked to be a terrible end to a great series. I should have had faith.

Speaking of faith, Chloe steps up as a genuine character with agency this month and activates the Clean Room, taking us back to Spark’s original exorcism. The entire sequence is, frankly, highly uncomfortable and features a fair amount of blood. It is also excellent and serves as a somewhat nauseating reminder of the evil nature that Astrid and Chloe face. It’s quite the contrast from the first few issues where Chloe was a bit of a back-seat player and the last few issues she’s really come to the fore and become a very cool character. With her connection to the Clean Room no doubt to be explored more, I am looking forward to where she goes next. 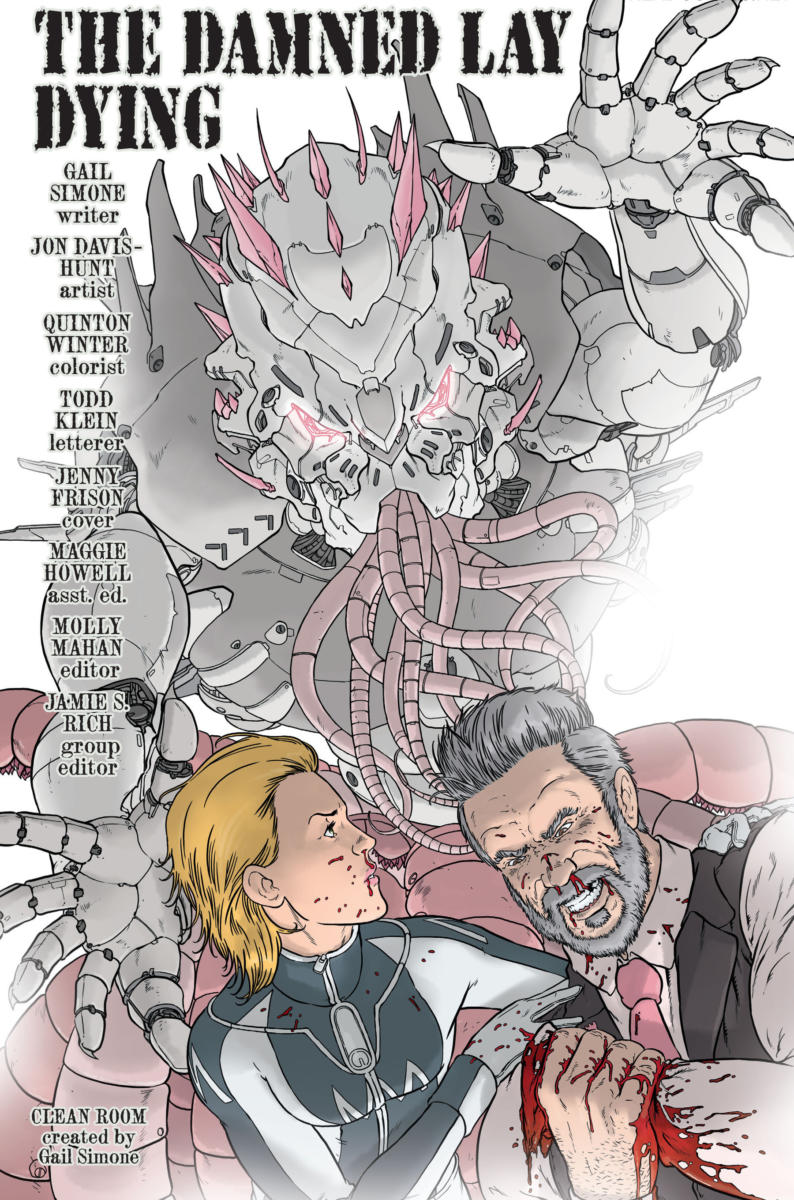 John-Davis Hunt’s art is as amazing as ever

The real highlight however, is Astrid. I won’t spoil the exact nature of her comeback, but rest assured, it’s quality stuff. It’s the kind of cold, calculated and monologue heavy sort of execution I’ve come to expect from her. It’s particularly satisfying to be horrendously wrong in this instance. Mr. Wenuka is revealed to not be the next big threat at all, rather it’s the same monsters we’ve come to know and love. It’s a good twist, and fits perfectly within the universe of Clean Room. With one of the better, more well-meaning and more sinister characters I’ve read in a while making a triumphant return, now is a good time to be a Clean Room fan. 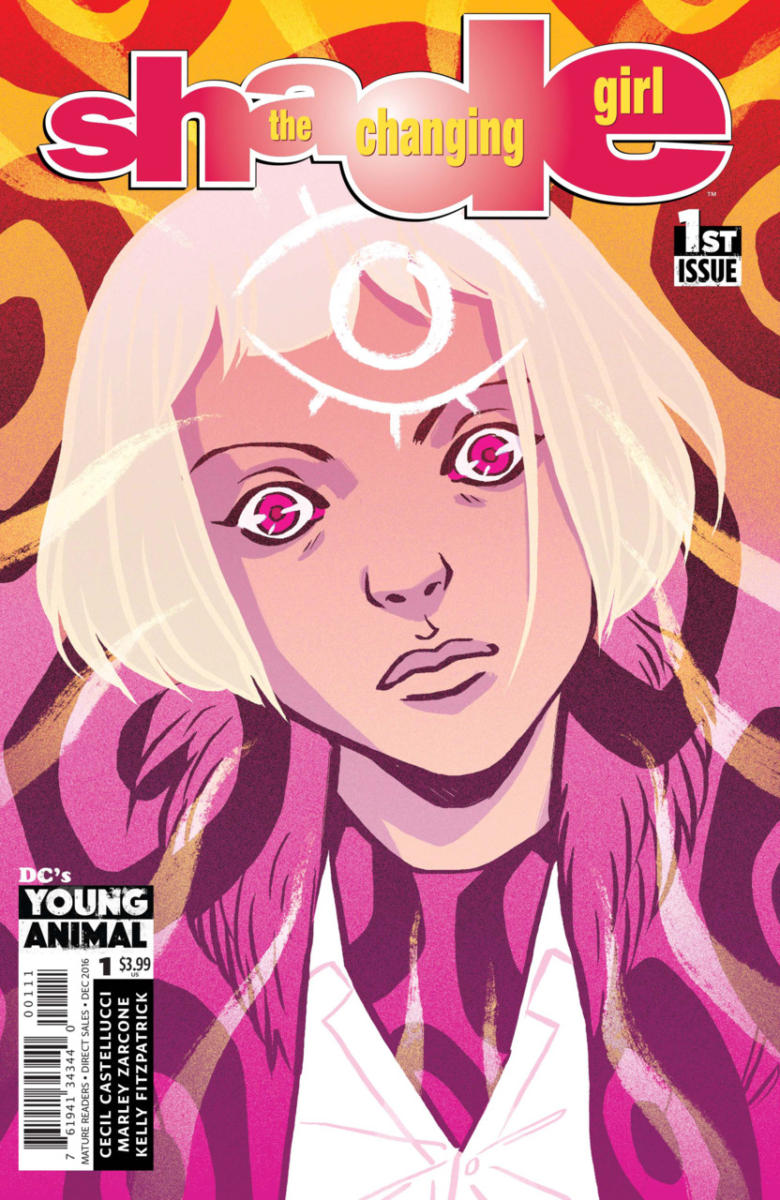 Let’s be 100% clear with each other. Shade the Changing Girl is very, very odd. All of DC’s Young Animal have been so far. Last month’s Doom Patrol, while enjoyable, did slip a little too far over into the weird territory. Shade has managed to delicately skirt that line and it has made for a great, if weird, comic. It all kicks off when the alien Loma Shade inhabits the body of a comatose girl, Megan.

There’s kind of a dual narrative running here, one where we discover who Loma is, and another where we discover who Megan is. Or rather, used to be prior to Loma’s arrival (she was in something of coma). Shade is a psychedelic trip through a truly odd sci-fi tale almost in the spirit of some of the stranger comics from the 70’s and 80’s. Those looking for a conventional story, conventional narrative, or even conventional art style will firmly want to stay away. Shade is not half-brain Sunday reading. Shade is the kind of comic that not only demands multiple readings, but actually requires it. It poses questions about the nature of sanity, perception and self; all while managing to squeeze out a pretty decent story. While it remains to be seen if it can stay consistent in the slightest, for now I’m quietly optimistic about Shade the Changing Girl. 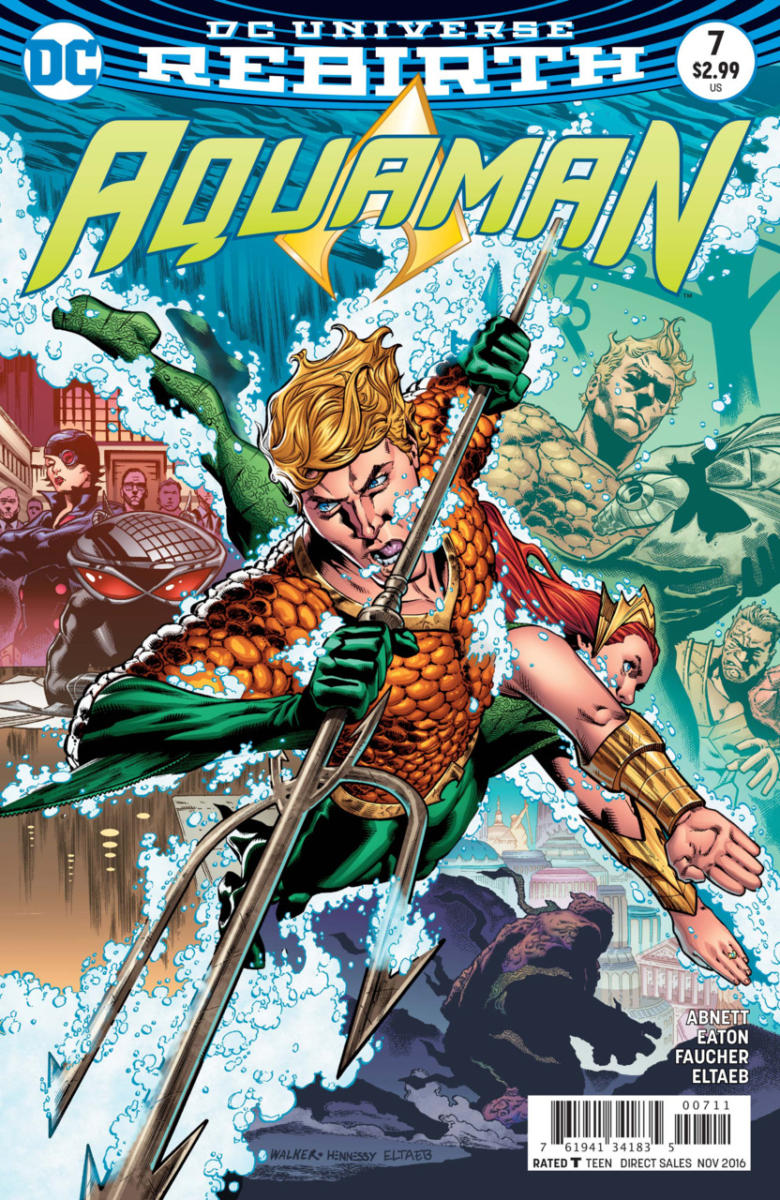 I am a huge sucker for alternative worlds. I love stories about other societies, technologies, and systems. So it’s no wonder I’ve fallen for the latest couple Aquaman issues hook, line, and sinker. Eight issues of Aquaman and that is the first time I’ve made that joke. I’m proud of myself. Anyway, fishy sounding jokes aside (I’m sorry), these last couple issues of Aquaman are really quite excellent. After a tense throwdown with Superman in #6, we return to Atlantis, and a turbulent Atlantis at that.

I mentioned this when the series started, but it’s always great to see Arthur/Aquaman the king. Not the hero, not the man who punches things, but careful statesman. That’s on full display here and Dan Abnett is to be congratulated for writing a genuinely smart and thoughtful hero. While it would have been easy for Aquaman to have simply punched or bravadoed his way out of an interrogation of a Deluge terrorist, it was refreshing to see him genuinely reason with him and come to a peaceful conclusion.

The real stand out from the two issues is Atlantis itself. From the varied members of its high council to the newly revealed trials Mera must go through to wed Arthur, Abnett has created this rich and interesting backdrop for his story that serves to make it just that much better. With Aquaman all set to start fighting a war on multiple fronts and Mera dealing with mysterious Atlantean trials, I’m excited to see the next issue. 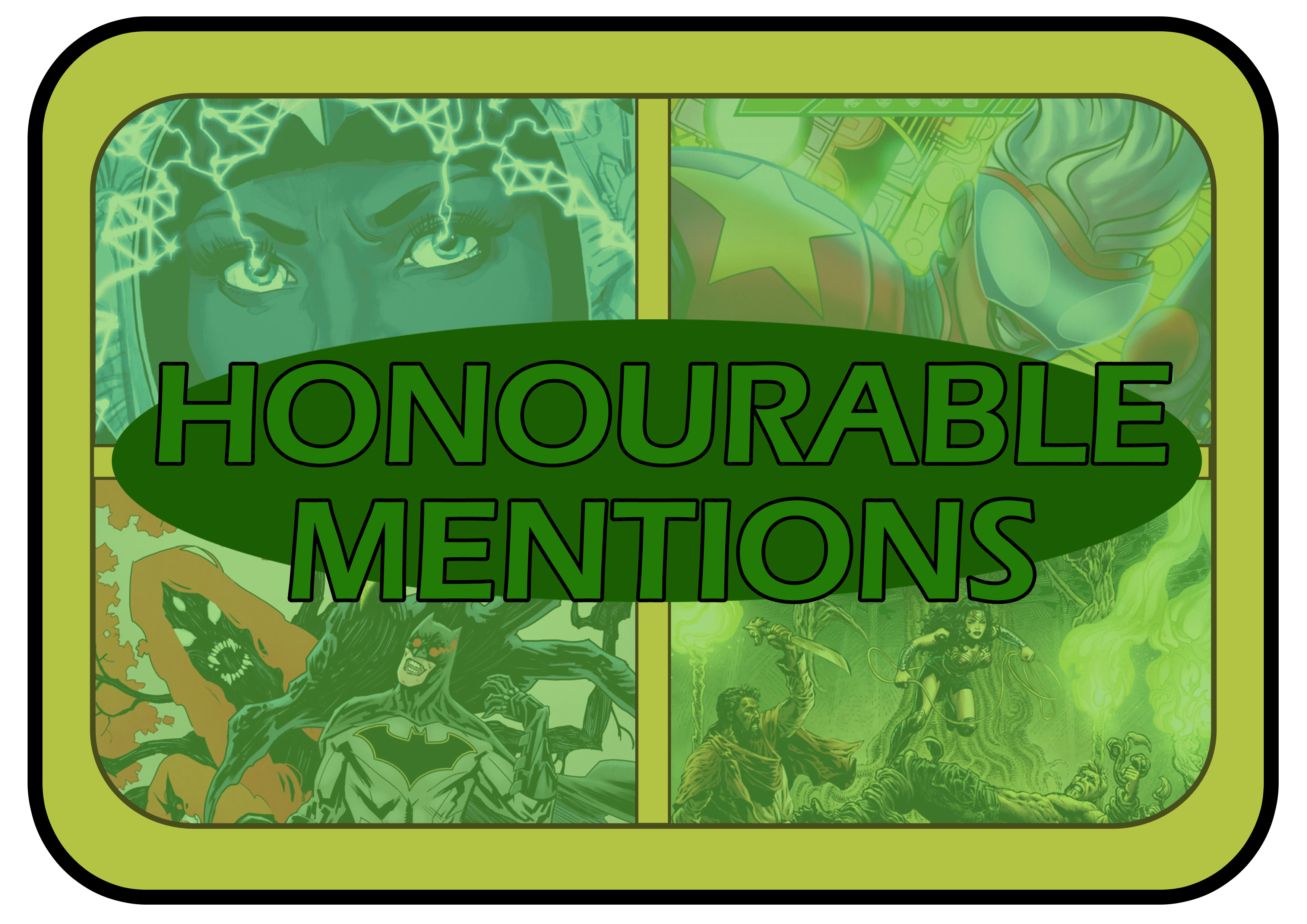 A small, but amazing, handful of other issues dropped this week. Bounty #4 hit the stands and although it was a little slow in terms of story, it more than made up for it in terms of characterization, humor, and a great ending. Bounty must actually be congratulated for being, from the beginning, one of the most consistent comics around. Much like Weibe’s other series, Rat Queens, the real joy comes the character’s interactions, and that’s on full display here. There is a genuine pleasure to be gained from just being with the Gadflies. On top of that is the highly interesting story that’s playing the background and the refreshing sense of agency that our characters have. Maybe I’m just sheltered but I’m loving having a series filled with female characters that are not only capable of having interesting stories, but are capable of fixing their own problems. More please.

Speaking of incredible female characters, Wonder Woman #7 hit the stands recently with part 4 of The Lies. A strong, visually appealing issue with Liam Sharp’s art really standing out from his gorgeous rendition of Wonder Woman to the very creepy and cool Urzkartaga. Often in comics from one of the two big publishers there is a tendency to play it safe with panels and layouts, not so here with a variety of flows and borders, making for a pretty cool reading experience. The story, while entertaining, just doesn’t measure up to the art or what has come before. While it was predictable that Urzkataga would be defeated, the way he was defeated felt just a little forced and kind of like it came from nowhere. That said, the bar set by the previous 6 issues is pretty darn high, so there was bound to be a disappointment at some point.

We also finally received another issue of The Autumnlands with issue 13. Now, don’t mistake me here, The Autumnlands is still an amazing series that you simply have to be reading. And this issue is pretty damn good. It just doesn’t make a whole heap of sense. Occasionally in a longer series like The Autumnlands, there comes a few issues that are far more satisfying when read with other issues, rather than alone. This is one of them. While the series does of course raise questions at all times and keep you wondering, there’s just a little too much of that going on and just a few too many plot threads and hints to keep tied down in the old brain-box. Perhaps when paired with The Autumnlands #14 a little more joy will be found. But for now, a slightly overstuffed chapter in an otherwise sleek and wonderful series.

Lastly DC Comics first large-ish cross-over event Night of the Monster Men is running rampant across Batman, Detective Comics, and Nightwing. The event isn’t much to write home about in terms of epic storytelling. That said, it’s still pretty bloody enjoyable and seeing the Bat-family fight giant, mutant monsters is quite fun. The cross-over format is also taken advantage of here with each issue actually used to tell a separate piece of story, allowing the whole thing to breathe. Too often a cross-over is used to tell a bigger, longer story, rather than just a more developed one. With one part to go, each issue having its own flavor, I am eagerly awaiting the final chapter.

That’s it for this week. Let me know what you’re reading in the comments, or hit me up on twitter!