I hope everyone had a great time at the Oath of the Gatewatch prerelease last weekend! I had a chance to play in the Sunday evening Two-Headed Giant event at Pandemonium in Cambridge, which was a blast (and very successful). More on that in a bit, though.

Last week was my customary limited set review, and this week I’m continuing a new tradition by talking about limited archetypes for Oath of the Gatewatch draft. As a reminder, archetypes are draft strategies. More specifically, for our purposes, they’re card lists of idealized or representative draft decks. Archetypes give you a roadmap for your draft pics and help you make decisions about what cards to prioritize and what cards to cut. In the abstract, they can also work as proof-of-concept for deck ideas that you think could work, but haven’t been able to try yet.

Generally speaking, a well-planned archetype helps you draft and build a more powerful limited deck. When it comes to Oath of the Gatewatch, archetypes are in a funny place: the conventional wisdom from Magic pros is that Oath is a set where picking generically powerful cards is better than drafting synergistic decks that are more than the sum of their parts. What to do with archetypes in Oath, then? First, let’s take a moment to consider the power that comes from building a limited deck according to a particular plan.

SO, ABOUT THOSE POWERFUL LIMITED DECKS…

A short digression for #sickbrags. My friend Stephen and I hit the lotto at the prerelease (the Magic lotto, not the $1.5 Billion lotto) and built two great decks, which we piloted to a 3-0-1 record. We were very fortunate with our pool, which furnished lots of powerful cards, most of which we were able to play.

First, my deck, which was an excellent green-black tokens deck: 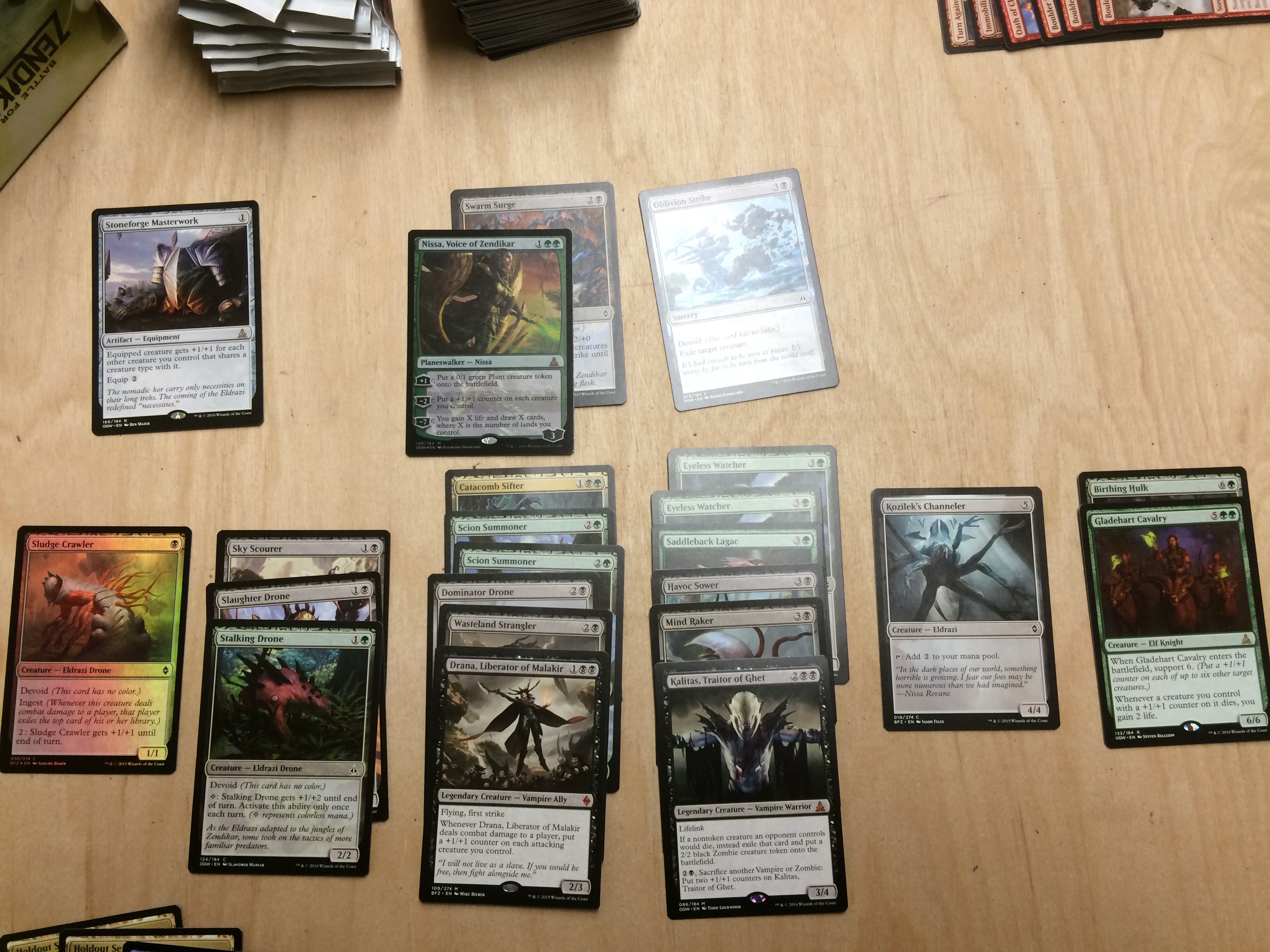 This deck had one plan: put a bunch of creatures on the table, pump them up, and swing for huge chunks of damage. Six creatures make Eldrazi Scion tokens (several make two at once), and there are five effects to boost them: Nissa, Drana, [mtg_card]Gladehart Cavalry[/mtg_card], [mtg_card]Swarm Surge[/mtg_card], and [mtg_card]Stoneforge Masterwork[/mtg_card] (which made every creature into a 6+ power must-kill threat).

To zone-block for the scion swarms, we made up a blue-red surge control deck for my teammate: 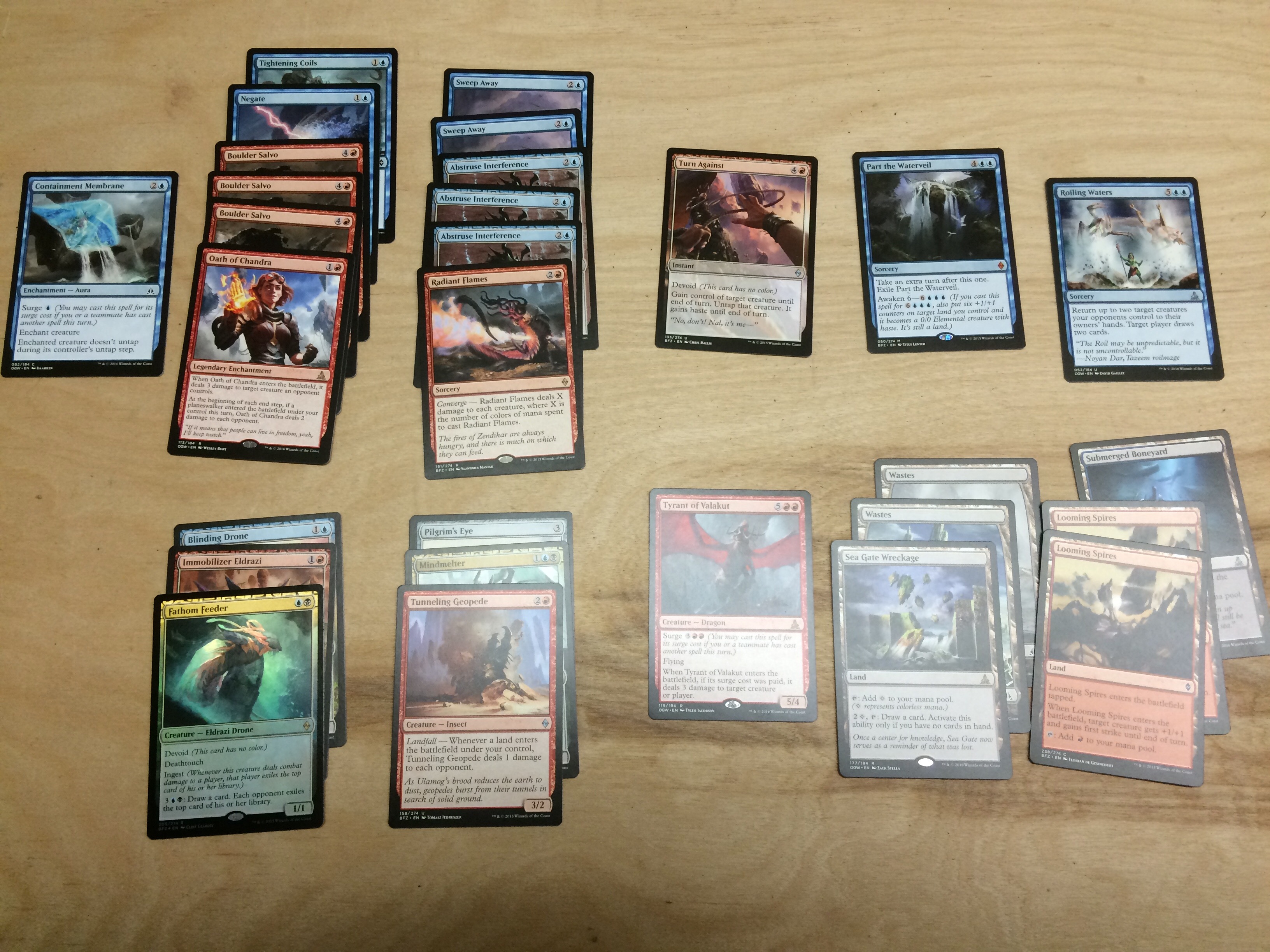 My team’s great decks (and my desire to gloat) aside, there’s a larger point here: part of what made these decks so strong is that we understood what each deck was trying to accomplish and cut anything extraneous.  I made the first pass on the blue-red surge deck, then passed it to Stephen, who promptly cut a bunch of reasonable-but-off-plan cards like [mtg_card]Goblin Freerunner[/mtg_card] and [mtg_card]Wave-Wing Elemental[/mtg_card]. Meanwhile, my deck had almost no creatures that weren’t Eldrazi and only one removal spell, since I knew Stephen had me covered. We left lots of good cards in the sideboard, but each deck had the tools it needed to accomplish its plan.

Which brings us back to the topic at hand: archetypes. When you’ve mapped out the plan for your limited deck, it means you’ve put in the thought to understand what the deck is trying to do, so you can select the best cards for the job. The result is a cohesive whole: much better than a random pile of good cards.

From Synergy to Goodstuff

Generally speaking, I think the conventional wisdom about Oath of the Gatewatch draft is true: good decks in Oath limited seem more likely to be collections of cards that are each individually powerful or efficient, as opposed to the sleek, synergistic decks of Battle for Zendikar. To understand why, we can consider BFZ‘s mechanics, which often formed the basis for its limited decks. Since we’ll now be drafting Oath-Oath-BFZ, we should think about how those mechanics will fare with two fewer BFZ packs in the format:

The common theme is pretty clear: many Battle for Zendikar draft decks were built around a single mechanic or an overarching synergy, and losing two BFZ packs really hurts those decks. With less synergy to draft around, taking the “best” card will be the right call much more often.

Even in draft formats like that, though, it’s important to have a good understanding of what your final deck can and should look like. If there is any profitable synergy to be found, this is a good way to find it. If not, you can at least come to a better understanding of what the schematic strengths and weaknesses of your deck are—the kinds of cards that can give your deck problems, or your best cards and the best ways to support or protect them. Archetypes can also help forestall structural issues. For example, in Oath of the Gatewatch, several colors are especially flush with four- and five-mana cards. Having a good idea of where your deck is going will help you understand when a particular card is a great fit for your deck, versus when it’s just a filler card that could be replaced by virtually any other creature in the format.

So, looking ahead to the possible archetypes in Oath draft, what do we see? Here’s my preliminary thoughts on every color pair, with sample archetypes sprinked in liberally.  If you’d like a second opinion on any of these, check out Modern Masters champion Neal Oliver’s views on green-white and white-blue here. (He should be updating that series in the days to come.)

Note that when you make your own archetypes, you should remember to balance the sets correctly: on average, you’ll have 15–16 Oath cards and 7–8 BFZ cards in each of your draft decks.

Oath draft should be a distinctly different experience from Battle for Zendikar: there won’t be as many huge Eldrazi, creatures will be a little more clustered in terms of their powers, toughnesses, and mana costs, and synergy will matter less. In Oath, a good creature for your deck is usually just a good creature, period. That said, there’s value in knowing what your overall plan is and having a roadmap to get there: even in a small set, you’ll have choices to make between two creatures or two removal spells, and when that choice comes up, you’ll be happy you have an archetype in mind.

Let me know if I missed any archetypes you’re excited about (on Twitter @cutefuzzy_) and good luck drafting!