AND WE’RE BACK!  Hopefully you’ve spent they last     (SORRY BRAD) reading our last installment, trying out a game or two with your work spouse, and are back for advice on how to include a third to your lunchtime board game sessions.

Three can be a difficult number.  Many games have three player variants which are either watered down four-player games, or good two-player games where a third player is shoe-horned in.   Also finding a game where ‘gang up on whoever is winning’ isn’t the only strategy is also a plus.

Here are some suggestions from my library and recent gaming experiences if you’ve got a third wheel on your next board game cafe date: 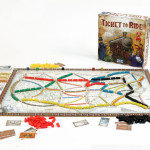 Ticket to Ride – This was my true gateway game.  I was tempted to save it for later in the series since it really does better play better with four or five, but I’m too into it not to suggest AS SOON AS POSSIBLE.  And since the base game isn’t playable with two, here we are.  This is a route building game which sees you try to connect goal cities across a map of early Twentieth Century North America (or Europe, Germany, Nordic Countries, etc. ).  I like it because the basic strategy is easy to grasp, the luck versus skill balance is pretty good, and it plays fairly quickly.  Check out my full Essentials Review for more details.  Do yourself a favor and pick up the 1910 expansion which provides full size cards and additional destination tickets.  I should note the Nordic Countries set is specifically designed for 2-3 players, though I haven’t had the opportunity to play that map. 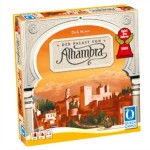 Alhambra – Alhambra is a tile placing game in which you build up a city by buying and placing colored buildings surrounding beautiful fountains. Multiple currencies and building types drive the strategy, and while they do make the game fun to play and pleasant to look at, it is a bit unfortunate that they heavily on multiple colors for both currency and buildings – colorblind players will definitely struggle with the game.  That being said, the mechanics are interesting and Alhambra fits my preferred luck versus skill mix (near the middle of the scale).  With three players (full capacity is six) you can implement a bit more “next-turn” strategy than while playing with five or six, and while keeping an eye on your opponents is key, you mostly play for yourself.  It’s a classic, with several expansions.  Give it a shot. 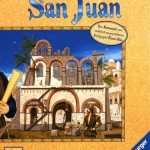 San Juan – This is a simplified, card-based version of the critically acclaimed (and more complex) Puerto Rico.  Build a set of ten buildings that produce goods to sell, provide benefits in later turns, or grant additional victory points at the end of the game.  (Face down) cards also function as currency, which means the only true component to the game is cards – no tokens or board necessary.  Each turn players select town roles which trigger goods production or sale, construction, or card draw for all players with a bonus for the person selecting the role.  It’s simple, and if you’ve played Puerto Rico you’ll notice watered down similarities.  This game plays GREAT with three, takes less than an hour, and its super portable because it consists of just cards.  I recommend picking it up for your next (gaming) threesome. 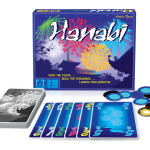 Hanabi – At first glance this game is super cute – pretty components, and a fun theme!  Who doesn’t love fireworks that seem to span three days on either side of Independence Day freaking out animals and keeping up tired parents of young children for hours on end just so people can fulfill their inner need to blow things up and… where was I?  Right.  At second glance this game is CHALLENGING.  You’re trying to construct a set of numbered and colored fireworks with the other players, but you can’t see your cards, only your teammates, you can only give limited information to each other, and you have limited opportunities to give that information before you lose.  Not recommended for recovery gaming on July 5th if you already have a headache, but great if you’re looking to show off your deductive reasoning, memory, teamwork, and luck! 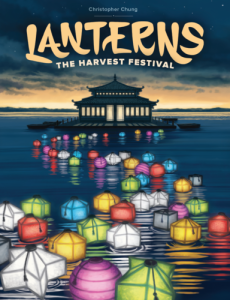 Lanterns: The Harvest Festival – I played this with my new friends Tara and Will at GeeklyCon 2015 (Link C-C-Combo!) and I had a great time!  It’s a set collecting game where you gain cards by placing lantern tiles in the palace lake.  Lantern cards are gained by all on each player’s turn based on tile orientation, so you’ll benefit even when your rival lantern decorators are foiling your best laid plans.  Match lanterns with adjacent tiles on your turn and you get bonus cards which help you complete your sets faster.  It’s very pretty, simple, and a generally low stress casual game.  This will be a very approachable game for younger gamers – don’t be afraid to invite local children into your windowless gaming van, they’ll have a great time!

Hopefully that gives you some new options for the traditionally difficult three player problem.  If you’ve got other suggestions, leave it in the comments!