There are an infinite amount of great games available these days.  We’ve reviewed several of them right here on GeeklyInc. in the past few weeks.  But not every game works with every group.  If just you and your sweetheart are playing, Shadows Over Camelot isn’t a great fit.  If you’re hanging out with your intramural kickball team it’s probably a little crowded for a nice game of Thurn and Taxis.

What we’re here to do is offer a few suggestions for your gaming group, no matter how many players you have.  We’ll kick off with games for two, in case you’re looking for something to play on your next romantic getaway, or the next time you’re home with your roommate and the power goes out. 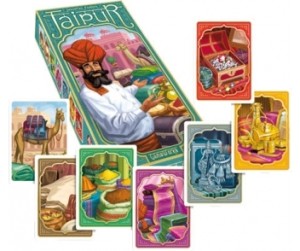 Jaipur has quickly become a favorite two player gaming option for our group.  Gather cards from the face up ‘market’ to make sets of various luxury goods (diamonds, gold, silver, spices, silk & leather) and trade them in on their turn for point tokens.  When to trade is key – players get the most points for trading in a specific luxury good early, but then also score increasing bonus points for sets of three, four, or five goods.

Camels cards drive the decision making, as they clog up the market and force either inefficient trades or using the entire turn to take all the available camel cards (and thus revealing five fresh cards for the opponent).

Jaipur covers all the bases – it’s quick, portable, fun, and easy to learn.  An easy recommendation for the two player set. 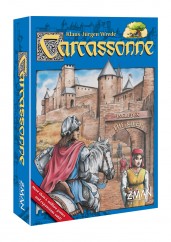 Jaipur, Carcassonne can handle up to four players, but plays well with just two.  This is a classic game, winning the Spiel des Jahres Game of the Year Award in 2001, and offers a simple concept with excellent replay value as well as several expansions.

Players build the map together from square tiles depicting fields, cities, roads, and chapels.  When a tile is played each side must match (roads with roads, cities with cities, etc.).  After a tile is correctly placed players have the option to place a meeple on any part of the tile, only getting their meeples back if and when the tile is scored during the game (cities are completely enclosed, roads have two distinct stopping points, chapels are completely surrounded).  Meeples placed in fields score points at the end of the game.

Fields are the trickiest part – once you lay down your meeple you don’t get them back, and what cities they border at the end of the game can change – connect two separate fields and all of a sudden you border five cities instead of two, but if your opponent manages to connect a road and sever your field, you’re cut off from additional points and down a meeple.  If multiple pieces are in a scoring area, the player with the most meeples scores the points, so with some foresight and some luck you can sneak away with your opponent’s points.

This is a game where you can play separately from your opponent by placing tiles in different areas of the map, or get in each other’s faces by trying get in on your opponents cities and fields.  Either strategy is viable, and it offers options for pairs that are super competitive as well as those who don’t want too much head to head interaction.  Fun for two, three, or four, Carcassonne is an old favorite worth checking out. 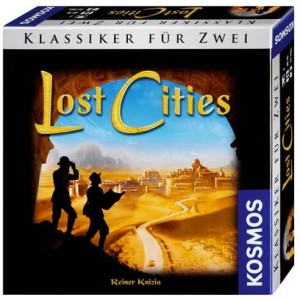 Lost Cities originated as a two player card game and has since been published as a four player version.  In either case the general gameplay is the same.  There are five colored tracks, each with a set of sequentially numbered cards.  On their turn a player adds a card to one of the tracks and draws a new card to fill their hand. The only catch is that each card played must be higher than the card before it.  Hands are limited to eight cards, so with five covlors you’re unlikely to have a nice run in one color.  Deciding when you need to drop a five on a one versus waiting to draw something in between is tough.  It also creates the unfortunately common situation where you play your Blue three only to pick up the Blue two to replace it.  You need a certain number of cards in a track to score positive points, so starting all colors is usually a poor choice.  You can also multiply your score on one track per round, so if you start with four Blue cards in your hand you have the option to invest more heavily on that track.  A lighter game that’s simple to understand for even filthy casuals, Lost Cities is worth picking up in either the two or four player version. 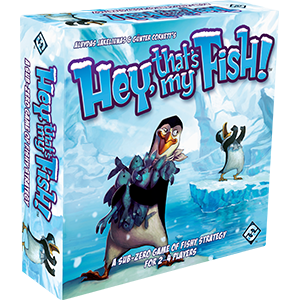 While designed to be very kid friendly, Hey That’s My Fish! actually leans towards strategy over luck.  Hex tiles are laid out to form an ice field, with each hex hosting one, two, or three fish.  Your penguin can move as far as you like in a straight line from one tile to another to collect the fish, but the tile it leaves falls into the water.  The player with the most total fish at the end wins, but making sure you don’t waddle yourself in a corner can be more important than grabbing those juicy three fish tiles.  Of note, this game is also an iOS/Android game which adds some cute animations and eliminates tile set up.  Play with your kids, or for maximum irony make it the championship head to head finale of your weekend board game tournament and watch as grown adults agonize over optimal penguin movement patterns.

This is by no means an exhaustive list, and many games we’ll cover in future installments also play well with two.  If you’ve got a great two player game suggestion, post it in the comments!