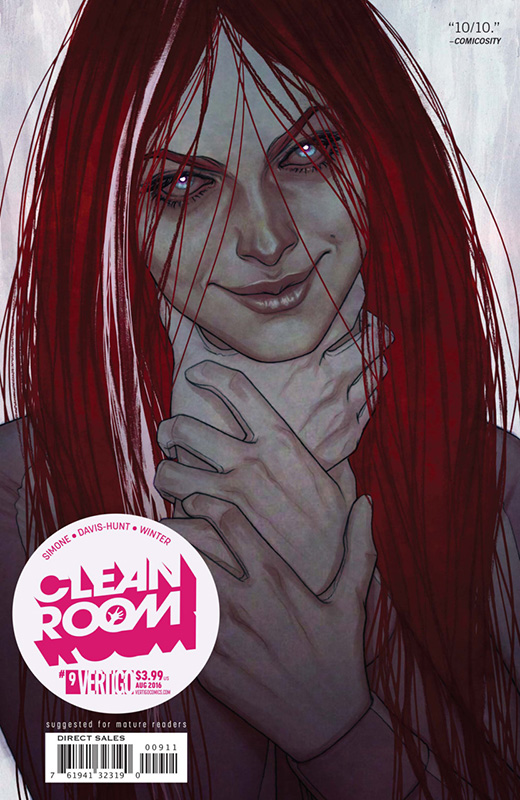 Clean Room has been one of the trippiest, most bizarre comics to ever grace my box since the day #1 came out. Part sci-fi romp, part body-horror extravaganza, I find Clean Room hard to classify. Previously the entire story had been flipped on its head with villain-turned-hero corporate overlord Astrid Mueller shot in the gut by her own brother (very unexpectedly I might add). With such a strong character cut down, it was time for our original main character, Chloe, to step forward. On top of that we’re finally getting a little more a glimpse at the mysterious alien threat that Astrid has worked so hard to deter. With Astrid dying in the ‘Clean Room’ and Chloe having released one of said aliens, I’m looking forward to more psychotropic weirdness.

Enjoyable, and still full of questions, but without the big narrative punch of previous issues. Said alien that was released in the Clean Room by Chloe, Spark, after some cajoling and threatening saves Astrid’s life. In amongst that is a flashback to Astrid’s younger days and her apparent retrieval of a component of the all-important Clean Room. Most importantly, however, was the first few pages wherein another, separate, corporate entity was revealed to be working against Astrid. With the ‘aliens’ being the primary, but still aloof, threat; it’ll be great to have Astrid and Chloe working against something a little more tangible and human.

Outside of that though I just couldn’t get my blood racing about much that was in here. I suppose that considering the shocking way that Astrid’s life was threatened, I was expecting something a little more when it came to saving it. The biggest issue, and the one that contributed the most to the issues weakness, was Chloe. It was great to see her driving the story and actually getting out there and doing things, but it felt just a little out of character. It’s understandable that Chloe needs to progress into a more active person, but not overnight, and a great number of lines from her sounded just plain weird. Nevertheless, this is still Clean Room. John Davis-Hunt, while most likely a bit bored with drawing the plain whiteness of the Clean Room, he does have a bit of fun with Spark and the art is just as good as past issues. An issue of what is sure to become ever important set-up, let down by slightly odd characterization. 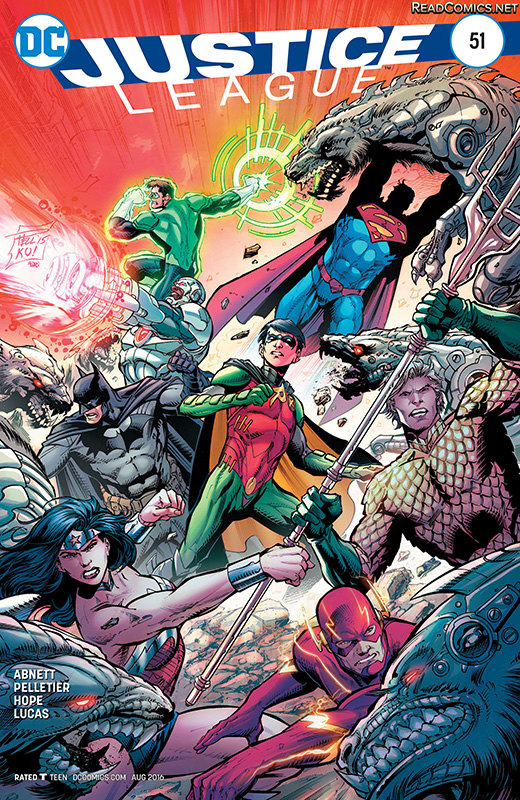 I have to feel a little sorry for Justice League. Well, in so much as one can feel sorry for a comic book series. Last month, Justice League wrapped up the cosmic-shaking epic that was Darkseid War. It ended on a powerful note with just the right amount of teasers, and was a suitable epic for the series to go out on. The end was timed particularly well with DC Universe: Rebirth coming out very shortly afterwards. With the Leagues future uncertain, it was a great end point. But here we are with another 2 issues to go, and I just can’t help but think that someone, somewhere is just ticking a box when these come out. The fact that Geoff Johns is no longer on this does reek to me of a kind of weary resignation around the series. I’m expecting, honestly, weak-sauce filler.

A decidedly mixed bag. This issue of Justice League is intended to lead into Titans: Rebirth and then into the main Titans series. And I can respect that. There’s plenty of teasing throughout the issue around some nameless threat that the Titans will have to no doubt throw down with at a later date. And from that point of view, the issue is a success. Robin ends up being brought along by Batman to meet the Justice League and help them fight three different interdimensional threats, and the source of the threats is genuinely intriguing. If I weren’t so poor, perhaps I would look into picking up Titans, just to find out what was going on. The art is also pretty stand out with some great splash pages. Each member of the league is done very well, if pretty predictably, and other than some slightly blurry faces, it’s great. Most of the issue is essentially one big battle scene, and the art and panels work really well here with the action being quite easy to follow and little being lost amongst the various punches and laser beams.

Despite this, however, the issue has one glaring flaw; the dialogue. There is a certain art to making comic book characters in comic book situations not sound hokey and cheesy, and this issue does not have it. Every character, and I do mean every character, sounds like they’re from the 50’s. No one seems to be having an actual conversation. Rather, it’s a glorified exchange of one-liners and clunky exposition. Quips are like salt, essential to a dish, but too much spoils the flavor. And unfortunately the dialogue here lets down what is otherwise an enjoyable issue. 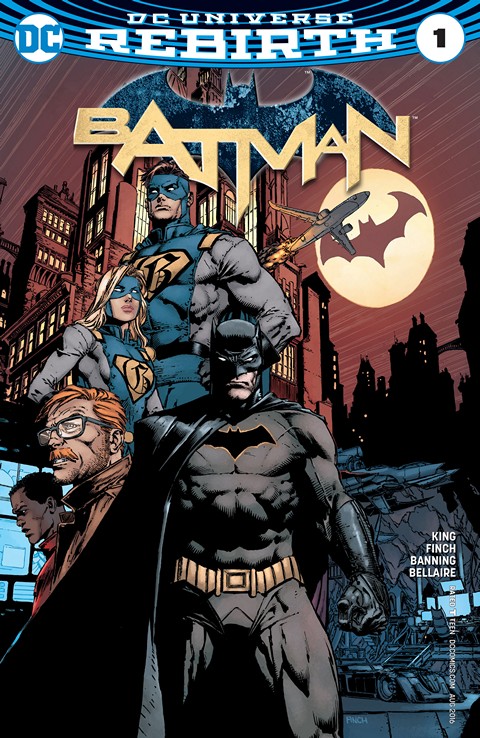 Much like Batman: Rebirth #1, I have already talked about the team behind this new version of the Caped Crusader, so I won’t blather too much. That said, Batman: Rebirth #1 has come out and I have to say I found it decidedly okay. The issue didn’t feel that much like a Rebirth, so much as a somewhat short and vaguely uninteresting Batman story. However, with Tom King’s new storyline set to kick off this issue, perhaps we’ll be in for something better this time round?

I have to honestly wonder why this was not Batman: Rebirth #1. It was, quite possibly, twice as good as the previous issue. Where Batman: Rebirth was a sort of unfocused Batman story, this feels more like an introduction into Batman as a character. And while it may not give me a full sense of what is admittedly a 75-year-old character, it does give me an idea as to where Tom King is going to be taking this. In it, we have Batman talking to Commissioner Gordon about a stolen surface to air missile. Predictably said surface to air missile then appears. It then promptly disappears into the back of a plane, sparking a race against time to stop the plane from killing thousands. It’s undeniably bananas and mildly, mildly stupid; but oh so good. This is a Batman that has plans within his plans and with just the right information from Alfred or Robin, any problem can be overcome. While this version of Batman is undoubtedly tough, he’s smart and resourceful; and its fantastic to see the Caped Crusader being taken in this direction. With a deft treatment of Batman and Gordon’s relationship, a white knuckle chase scene ripped straight from a blockbuster and surprisingly genuine and emotional finale; this is definitely a series to watch. 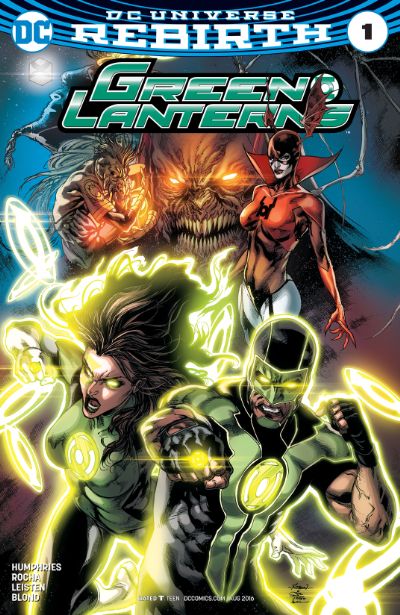 Again, I’ve covered the team for Green Lanterns in the past, and it’s looking pretty solid. Green Lanterns books pre-Rebirth have been, overall, pretty average. Not terrible, but not good by any stretch. Sam Humphries Green Lanterns: Rebirth #1 was a little better. With a healthy buddy-cop dynamic set up and a clear intention for long running stories, my hopes are high.

While Batman #1 may have been an intense and oddly poignant first issue, Green Lanterns goes in entirely the other direction and gleefully embraces its slightly ridiculous sci-fi roots. What starts out as a routine investigation into an unauthorized alien quickly turns into something else. With an entire host of problems from a basement full of bodies to an inter-dimensional traveling tower, the whole issue feels strange in the best sort of way.

While Green Lantern has always been a sci-fi story, the very nature of the ring means that there’s a slight fantasy element to the lore. Sam Humphries seems to have jumped on this with total gusto and if this fusion of sci-fi and fantasy is what we can expect from the future, I’m more than ready. What I particularly enjoyed, much like the Rebirth one shot, is that Humphries clearly has a longer game in mind here. While his first consideration is for this current arc, the presence of a variety of teasing questions makes it obvious that some amount of actual thought has gone into this. The only real point that the issue is let down is in terms of art. It’s still great and everything from the ‘hell-tower’ to a green ring boxing glove looks fantastic. It’s just a bit uneven. The pages where Atrocitus makes his return genuinely look like they’ve been done by a different artist. But, it’s a small blemish on what is otherwise quite a fun comic book.